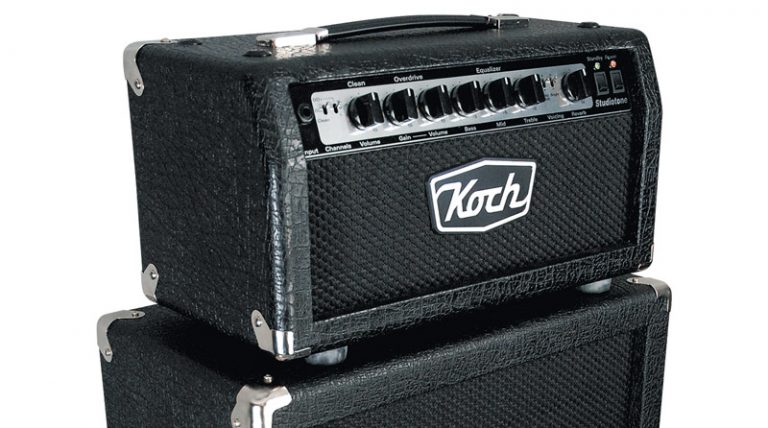 The Studiotone’s lightweight, compact (19 pounds/18″ x 9″ x 9″) cabinet is made of 11-ply birch plywood covered in black tolex with chrome hardware. It may be small, but it’s loaded with features, including three footswitchable channels (Clean, Overdrive 1 and Overdrive +), spring reverb, a recording output with a speaker dummy load, cabinet emulation, effects loop, and high-quality components. The control layout includes a three-way toggle for switching between channels labeled Clean, OD, and OD+, a three-way Gain toggle for the OD+ channel, clean Volume for the Clean channel, Gain and Volume for the OD channel, active Treble, Mid, and Bass tone controls, a Mid Shift mini-toggle, three-way Bright switch, Reverb knob, and switches for Standby and Power.

We listened to the Studiotone by plugging in a Fender Custom Shop Custom Classic Stratocaster, a Paul Reed Smith McCarty Soapbar, and a Hamer Studio with Seymour Duncan Antiquity humbuckers. We plugged into the matching Koch 2×12″ closed-back cab with Koch ceramic-magnet speakers, and an open back 2×12″ with Tone Tubby speakers.

Switching the amp to OD proffered an excellent, slightly aggressive blues-overdrive tone with fair amount of sustain and nice, dirty overtones. For the most part, we kept the tone controls between the 10 o’clock and 2 o’clock positions. With the amp’s Volume controls turned all the way up and the Hamer plugged into OD+, we used the Midrange control to scoop the mids for a modern overdrive/distortion sound. This setting also let us truly utilize the Mid Shift switch to get two distinct sounds, changing the frequency of the midrange control from a higher, more cutting sound to a lower, deeper sound.

Though the Twintone produces only 20 watts output, it is undoubtedly loud enough for most small-to-medium-sized-club gigs, unless you need a pristine clean tone at high volumes, as even the clean channel broke up a little when the EL84 power tubes are pushed to higher volumes.

As with both of our previous tests involving Koch amps, the reverb circuit in the Twintone is outstanding – lush, with a crisp, clean tone and a deep dwell.

We tested the Studiotone’s recording output by connecting it to a small console and a pair of JBL reference monitors. Through the recording rig, it gave a very accurate representation of how it sounds through the two speaker cabinets. The cabinet emulation switch offers two subtle tone options – a tighter, thicker sound with enhanced low-end response in the 4×12″ position, and a more open/even combo-amp tone in the 1×12″ position. The microphone position switch also gave very usable options; the direct/on-axis position offered a brighter, more articulate sound than the off-axis position, which gave a dark, more midrange-oriented tone more suitable for heavy overdrive.

With its recording output section and compact design, the Koch Studiotone is a very giggable amp that could run a favorite cabinet at the gig, then the head could be easily hauled home or to the studio to record direct while still delivering “live” gigging tone. – Phil Feser