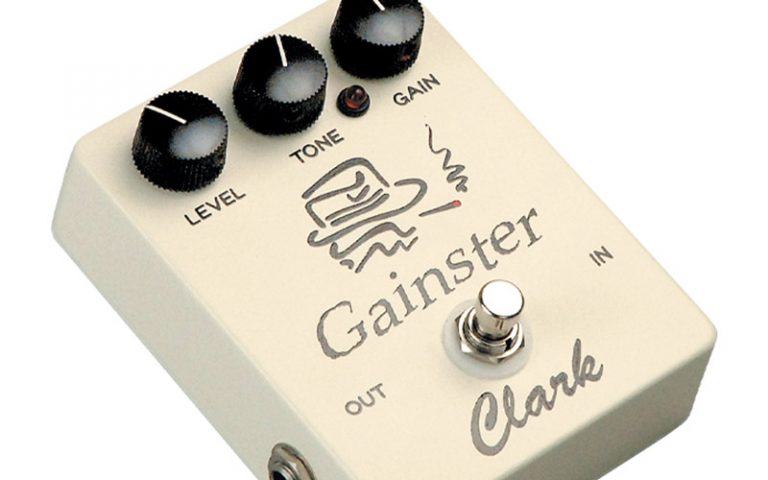 Before he got into the effects pedal biz, Michael Clark had a reputation for building killer tweed-inspired amps. In 2001 he utilized his tonal superpowers to devise the first version of his Gainster overdrive/boost pedal. Though he was mostly satisfied with the tones it made, he was bothered by the fact it was nearly as big as a house, and cost only slightly less than one. So he enlisted the help of electronics guru Dave Barber, and in 2005 the duo introduced a smaller, more practical version.

The new, improved, and shrunken Gainster is housed in a 3.7″ x 4.7″ x 1.5″ military-grade chassis. But other than being demonstrably more diminutive, Clark didn’t cut any corners; the Gainster’s electronics are still hand-wired and mounted to a glass-epoxy circuit board. It also uses full-sized pots and Swithcraft jacks. The housing is powdercoated and silkscreened, with hand-painted graphics.

The Gainster employs the typical controls for Level, Tone, and Gain, and Clark and Barber added an internal control that can add a fixed bass boost, which can be especially helpful in aiding the tone of single-coil pickups/guitars. There’s also a 9-volt power insert and true-bypass stomp switch.

We plugged the Gainster between a G&L Special and a Genz-Benz Black Pearl 30 amp, through the clean channel set to break up ever so slightly.

When playing through a boutique overdrive pedal, players generally want to “hear” transparency. Striking a chord, the Gainster served quick notice that it is indeed a high-end pedal; using a couple of sample settings supplied by Barber, we toyed with the Level and Tone controls while leaving the Gain dialed almost totally out. The tone was very balanced, with none of the typical midrange attack one hears from so many Tube Screamer-type pedals. All high- and low-frequency sounds maintained their integrity as we rolled up the Level control. Increasing the Gain revealed the true versatility of the pedal as it offered steadily increasing distortion as we rolled past 12 o’clock, then went into the hard rock arena.

The Gainster’s greatest strength is, without question, its flexibility. Leaving the Gain control right about where Barber suggested provides all the clean boost a person would want for the vast majority of situations. Manipulating the pedal’s Level lets a player make good use of an amp’s headroom.