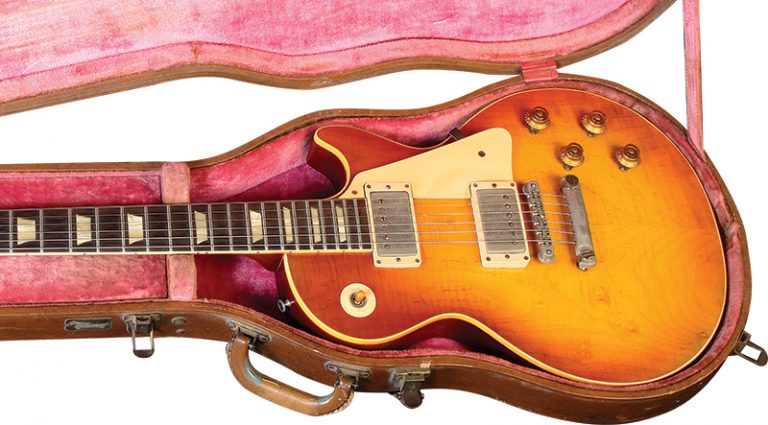 Modern guitars are almost always sold with a hard case or modestly priced upgrade from a gig bag. However, this has not always been… the case.

Prior to 1970, instruments were usually sold without a case, and obtaining that protection was significantly more expensive – 20 to 25 percent of the instrument’s price – sometimes almost as much as a low-end instrument.

Today, cases typically account for six percent or less of the cost. The difference is due in part to increases in guitar prices (even after adjustment for inflation) and partially due to technological changes in case construction.

Until the 1970s, case construction was dominated by American companies like Geib, Lifton, Ess & Ess, Stone, Victoria, and G&G. Their best models had a wood-laminate frame, cover material like Keratol, Airplane Cloth (tweed) or Tolex, and a padded flannel or silk lining. Though adaptable in size or shape (prior to World War II, Geib advertised made-to-order cases), they had issues including weight and susceptibility to water damage. Also, because their construction required woodworking, making them required a trained labor pool.

In ’68, Martin began offering its D-45 with a case made of injection-molded plastic and a foam lining that had a tendency to expand; leaving guitars in one for extended periods often resulted in crush damage. In 1970, they redesigned the case, making it from blue ABS plastic with a pseudo-leather texture. Known as the 600 series, it had a blue plush interior lining and a layer of polyurethane foam under the lining. Built by Alfred Freistat, Martin advertised the case as “virtually uncrushable, with unified, lightweight thermal protection.” They were certainly more water-resistant and lighter than their wooden predecessors, but many came to dislike their appearance and prominent logo, believing it caused them more likely to be targeted by thieves. They were also less resistant to impact, making them susceptible to hinges and latches being broken off or becoming semi-functional.

In ’79, the Martin 600 cases retailed for $105, and a style HD-28 to carry inside it was $1,145 more. At only nine percent of the guitar price, they represented a significant decrease in relative cost.

One of the earliest companies to follow Martin with injection-molded cases was Ovation. By May of ’72, its model 9110 case was $73.50, and the shape of its extruded foam mirrored the parabolic plastic back of the instruments, making is usable only for Ovation instruments. A Balladeer retailed at $265 (the case 28 percent of that), while the Glen Campbell model was $365, so a case added 20 percent.

To increase profit, retailers often made separate deals with case manufacturers. However, beginning in 1970, Martin guitars were sold only as a “uni-pack” (with case) and were mandatory for dealers – likely the first example of any such requirement.

Major U.S. manufacturers of traditional cases fared okay for several years, until the market came to heavily favor the plastic variety, and until the U.S. economy experienced a decline in the early ’80s, which eventually helped put builders like Geib, Lifton, and Ess & Ess out of business. Remaining traditional cases were often not of the best quality, but demand for them never completely abated, creating an opening for Canadian and Asian companies. These exact circumstances caused Taylor Guitars to begin building cases in-house.

Cases for electric guitars followed a similar pattern. In April of ’54, Fender advertised its best “Spanish electric” hard case (for Telecaster or Stratocaster) at $39.95. At that time, a Telecaster sold for $189.50 (list), while the Strat was $249.50. A case required an additional 21 percent for a Tele and 16 percent for the Strat. Today, adjusted retail price on a ’52 reissue American Vintage Telecaster is $1,879 after a $119.99 deduction of the Deluxe Vintage Tweed case, representing six percent of the cost of the guitar. A ’56 reissue American Vintage Strat has an adjusted retail of $2,179 and is supplied with the same case at five percent of the cost of the guitar.

Present-day manufacturers of heavy-duty road cases like Calton (fiberglass or carbon fiber construction) and Hoffee (carbon-fiber construction) have no pre-World War II equivalents. However, at an average suggested retail price of $1,000, they approach the cost percentages of their less-protective pre-war predecessors (unless they’re used to house a guitar valued at more than $18,000).

Changes in materials and manufacturing have reduced the cost of protecting a guitar, even in the face of increased labor costs and inflation. With the decimation of American manufacturers and radical expansion of guitar production, no U.S.-based manufacturer of traditional cases could keep up with demand, so the influx of Asian and Canadian-made cases helps fill the gap.