Valco, the Chicago-based maker of amplifiers such as Supro, Gretsch, and Oahu, began its history around 1942 amidst the Hawaiian music craze. By the late 1960s, it had become roughly the third largest amp manufacturer in the U.S., only to disappear from the radar screen in 1968.

The company’s history is familiar – a rise to certain level of prominence that peaked in the mid 1960s, followed by a fairly rapid decline.

Valco’s house brand, Supro, reached its apogee around 1964, when it introduced scads of new products, among them the legendary S6420 Thunderbolt Bass Amplifier.

In its early-’64 catalog, Supro tried to market the model 1688T – a two-channel, 2X12 combo – as a bass amp. But the 88T had been designed for guitar and accordian, as well; bass players wanted something more specialized.

So, in the late-’64 catalog, the new Thunderbolt Bass Amplifier ($179.50) debuted in the 88T’s old spot in the lineup. The Thunderbolt had been designed, as the catalog put it, “…exclusively for the electric Bass guitar.” Supro suggested thinking of it as “A quality jazz unit you can carry.”

Little did they know!

The S6420 was covered in Supro’s traditional blue “rhino hide” tolex with horizontally striped grillecloth in various colors. This formula was left essentially unchanged until ’66, when black tolex was substituted.

Electronically, the Thunderbolt was simplicity itself, with no “fancy extra circuits.” The only controls were tone and volume – and it had plenty of both. The amp was equipped with a pair of RCA or Sylvania 6L6GCs, a 5U4 tube rectifier, a huge power transformer, and a pair of RCA 12AX7 preamp tubes. The chassis, mounted on the floor of an unusually large and deep (11 ½”) cabinet, was hooked up to a thunderous Jensen C15PS. On paper this may sound like the recipe for a good bass amp, but the result was mediocre at best.

Like Fender’s tweed Bassman, it was only when a guitar was plugged into a Thunderbolt (and of course turned up to 10) that the amplifier’s sonic potential became clear. Although disappointing for bass, the S6420 proved a brilliant guitar amp – one of the best ever made – by anyone.

Versatile it is not; rather like a Champ – or better yet, a Marshall on steroids – its sound is the epitome of one thing: huge, raw, gnarly, overdriven, big-shouldered, blues tone heaven. And because of that Jensen 15″ speaker, T-bolts have the monster booty of low-end.

But in the ’60s, almost no one knew that. Supro continued to market the S6420 as a bass amp, to a chorus of complaints. Bass players encountered so much flutter in the baffleboard that it was almost unusable.

Supro tried to correct the problem in early ’66, strengthening the baffleboard by cross-bracing the speaker hole and a thin wooden brace to the right of the speaker. In the second half of ’66, a solidstate rectifier replaced the earlier 5U4 tube, tightening up the low-end response even more.

These mods improved the Thunderbolt as a guitar amp, but it was never truly usable for bass.

So in 1967, Supro discontinued the S6420 Thunderbolt and replaced it with the completely redesigned model S6920 Thunder Bolt, which has a different cabinet, cosmetics, and circuit; not at all the same amp.

Jimi Hendrix owned a S6420 Thunderbolt, and Jimmy Page used Supro amps for recording much of the early Led Zeppelin material. Whether or not he used a Thunderbolt is unclear, but his playing on “Heartbreaker” sure sounds like one. 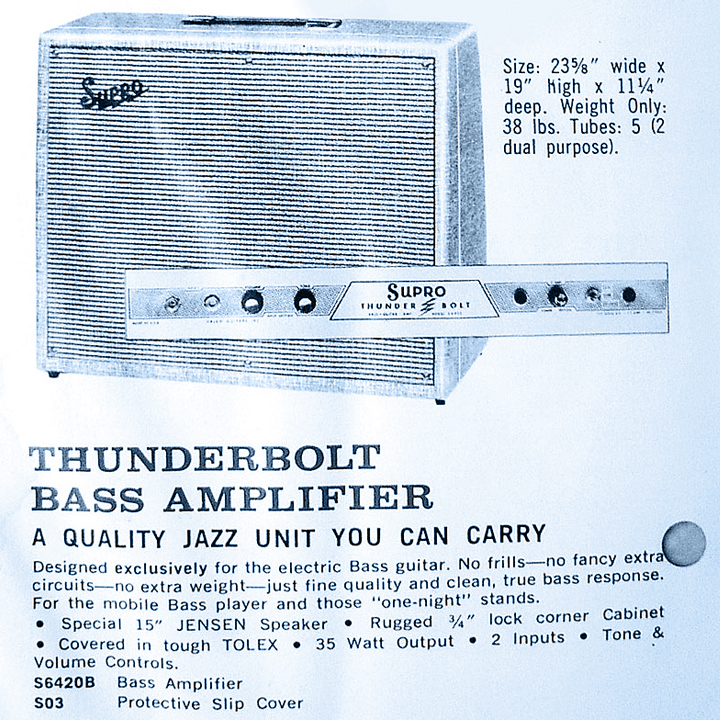 Christopher Tackett is a freelance writer who bought his first Supro Thunderbolt new in 1964. He lives in western Massachusetts.

This article originally appeared in VG January 2003 issue. All copyrights are by the author and Vintage Guitar magazine. Unauthorized replication or use is strictly prohibited.