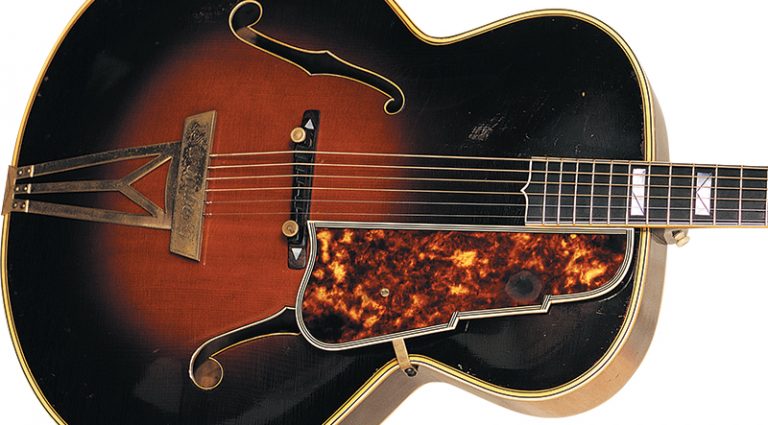 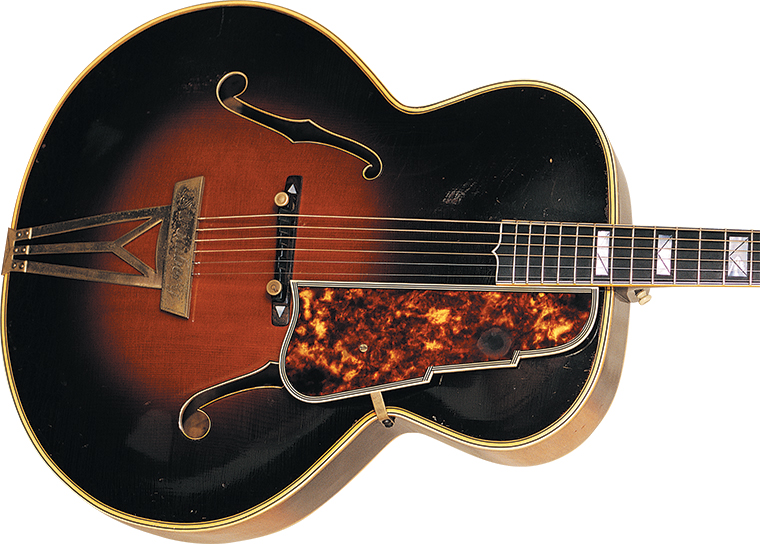 The Stromberg Master 400, measuring a gigantic 19″, is considered by many to be the ultimate orchestral rhythm guitar. The instrument of choice for Freddy Green with the Count Basie Orchestra and other players who needed the ultimate in power and projection to cut through a brass band or full orchestra without the benefit of electronic amplification. From 1940 onward, Stromberg’s top models, the 17 1/8" (measured across the lower bout) Deluxe and 19″ Master 300 and Master 400, featured one diagonal brace on the underside of the top. These guitars are among the most sought-after of all rhythm guitars, and possess a sound of their own, epitomized by a power and projection unsurpassed by any other archtop acoustic.

Stromberg guitars are exceedingly scarce. Charles Stromberg and his son, Elmer, worked alone in a small shop in Boston. They started building guitars in the early 1930s, about the same time as D’Angelico. But while D’Angelico produced approximately 1,100 guitars in his lifetime, Stromberg serial numbers only run up to 636 (a G-5 cutaway model finished at the time of Elmer’s death), but they appear to start at about 300.

Prior to producing guitars, Charles made drums and banjos. Higher-grade Stromberg tenor banjos are very fine instruments with a distinct Stromberg Marimba-Tone sound quality, and fancy ornamentation. While these banjos are valuable, the Stromberg reputation today is based primarily on guitars.

Early Strombergs employ pressed arched tops with two parallel top braces running lengthwise, transverse cross braces, and they have laminated backs and sides. The F holes on early models are three-piece, similar to the hole/slot/hole design used on early Epiphones. Makers such as Gibson, Epiphone, and D’Angelico were producing guitars with carved tops and backs, and all solid wood. It’s remarkable that a hand-builder such as Stromberg was using pressed tops and laminated backs in much the same manner as Kay or Harmony. But the tonal quality of early Strombergs, while not equal to their later productions, is so good that these instruments are still highly sought by collectors.

Starting about 1940, Stromberg instruments went through radical design changes such that those produced from that time onward are notably different from earlier examples. The three-piece F holes were replaced by one-piece F holes and the tops were carved and graduated rather than pressed. The earliest examples with the one-piece F holes have two parallel top braces, but shortly thereafter the top models featured one diagonal brace. At least one Master 300 model, with a serial number in the mid 480s, has parallel top braces. The earliest diagonal-braced Stromberg I’m aware of is Master 300 serial number 497 with one diagonal brace. Serial number 498 is a Master 400 in natural finish with one diagonal brace, and serial number 500 is another diagonally braced Master 400. 501 is a diagonally braced Master 300. At about the same time, Stromberg introduced an adjustable truss rod in the neck with the adjustment nut located under the removable bone string nut.

The Master 400 pictured here (SN 503) is typical of the period, with a 19″ body, carved top, with one diagonal brace, one-piece F holes, and pearl inlay on the peghead rather than the plastic engraved-and-painted peghead veneer with beveled edges used on earlier and later model Strombergs. This inlaid peghead was used only briefly on top-of-the-line Strombergs. At the time this guitar was made, though the top construction had evolved to being carved and graduated with one diagonal brace, the back and sides were still made in Stromberg’s earlier-style construction, since they are laminated rather than solid. Strombergs made shortly after this guitar feature carved graduated backs and tops, but the sound of this guitar is remarkably similar to those with the carved backs.

Master 400 number 498 also has laminated back and sides, so it’s reasonable to assume this was standard construction at this time; the serial number of the first Stromberg to feature a solid-wood carved and graduated back would likely have been during (or not long after) 1940. But even after 1940, and quite late into his career, Stromberg used laminated backs on an almost random basis, such that some guitars from the same period have laminated backs, while others have solid backs.

Unfortunately, Stromberg left virtually nothing in the way of written records, making it exceedingly difficult to know exactly what roles were played by Charles and Elmer, but their customers recall that Charles was primarily involved with drums and banjos while Elmer was the primary guitar builder. In fact, the radical change in construction was likely the result of Elmer taking over production. 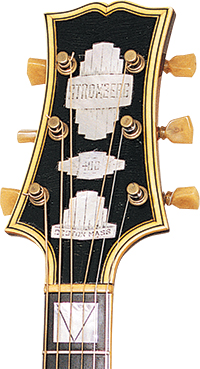 Unfortunately, Charles and Elmer died within a few months of each other in 1955, so the “golden age” of Stromberg guitars lasted only 15 years, during which time only about 150 guitars were made. Few were the top model Master 300 and Master 400. Of these, only a fraction were cutaway models. Stromberg’s greatest reputation was for orchestral rhythm guitars. The exceedingly scarce cutaway Strombergs are superb instruments and are among the most valuable of all vintage archtop guitars. Interestingly, the cutaway Master 400s measured 18 ½", while the non-cutaway version was 19″.

While Stromberg guitars exhibit very fine craftsmanship, their binding, inlay, and finish work is not as slick and smooth as many modern makers. While Stromberg did pay attention to cosmetics, its guitars were designed to be working tools rather than strictly pieces of art. While many modern makers are rather obsessive about cosmetics, Stromberg was much more in the tradition of early violin makers, for whom it was acceptable to have a few visible chisel marks and asymmetry in work, as long as the end result showed artistic character and combined superb sound with great playability.

Stromberg guitars produced from 1940 onward are very innovative instruments. No maker before or since has produced archtop guitars with one diagonal brace on the top. Many have made parallel-braced or X-braced archtops. Most modern archtop makers have strived for smooth, mellow sound with good sustain suitable for studio use, whereas Stromberg aimed for a more percussive sound with great projection, specifically to cut through a band or orchestra. For this purpose, not only are Strombergs unsurpassed, but no other maker has even come close. They don’t pretend to be solo lead guitars or “modern jazz” instruments, nor are they ideal instruments to be fitted with a pickup. They are superb acoustic projection machines, but they seem to fight amplification. Just as a Mac truck and a Ferrari are both superb for their intended function, but are clearly not interchangeable, a Stromberg guitar does not make any pretense of being a multi-purpose instrument. For its intended function, though, the Master 400 is unsurpassed.

This article originally appeared in VG December 2004 issue. All copyrights are by the author and Vintage Guitar magazine. Unauthorized replication or use is strictly prohibited.