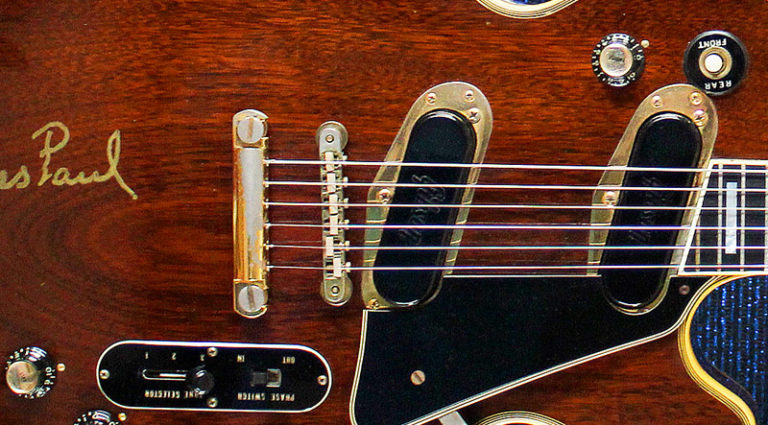 Billy Soutar loves the vibe of his 1969 Les Paul Personal and matching LP-12 amp. While the guitar’s mahogany body, Les Paul Custom touches, three-piece quartersawn neck, and Fretless Wonder frets make it a great player, it mostly serves as a reminder of another guitar – and a great friendship.

“In 1991, I saw a newspaper ad for Les Paul’s Monday-night gigs at the Fat Tuesday’s Jazz Club, in Manhattan,” Soutar said. “I’d been a fan since I was a kid, so my friend, Steve, and I were soon off to New York City, hoping to get Les to autograph my ’52 goldtop and Steve’s ’79 Les Paul 25/50 Anniversary.”

Driving from Chicago, they arrived in time to enjoy a meal in Fat Tuesday’s dining room, then ambled downstairs early enough to find an empty venue.

“Out of nowhere, Les walks up behind us and says, ‘Watcha’ got in them cases, boys?’ And before we could open them, he stopped us and said, ‘Let’s chat after the first set.’ Then he vanished into the green room.

“Being the first ones there, we grabbed the best table, of course. The club filled around us, and Les’ trio played an incredible set just a few feet away. The energy radiating from him filled the room.”

After the set, Les signed autographs and posed for pictures. Once everyone had their turn, he approached Soutar’s table.

“He signed Steve’s guitar with ‘Keep Pickin’,’ but instead of signing mine, he grabbed it and started talking about it as if it were his first offspring,” Soutar laughed. “I tried to hand him the black marker, but he kept changing the subject, then said we would chat more after the second set.”

They later talked until the club closed, then moved the discussion to the sidewalk, where Soutar fielded Les’ increasing offers to buy the ’52. Very attached to the guitar, he kept deferring – until an idea hit.

“I told him I’d feel better trading for one of his guitars, maybe the one he played that night,” Soutar said.

“He told me the guitar he had that night was one of two Heritage 80 Les Paul Custom Recording models that had been hand-made by Chuck Burge at Gibson, and that he would trade the other one. I agreed, and handed over the ’52.”

Paul wrote his phone number on a piece of paper, then climbed into the passenger seat of an old GMC Jimmy driven by his son, Rusty, and they were off.

The evening was the start of a friendship. In the years that followed, Soutar returned to Les’ gigs several times, bringing friends and family. In ’97, he paid his first visit to Les’ home, where he broached the subject of the trade. Again, though, Les deferred, offering guitars other than the Heritage 80 Custom.

“It turns out the two Burge guitars were insured for a million dollars apiece, and Les had been advised to hold on to them,” Soutar said. “So, he returned the ’52.”

Soutar visited Les and his family several more times before the legend’s passing in 2009, including once to have Rusty install a transformer in the guitar you see here, which Soutar found in an ad in Vintage Guitar. Made for Gibson’s “75 Years of Excellence” Diamond Jubilee Celebration, it’s one of the first Les Paul Personals ever made – one of two in ’69 – and has features of the era like a holly headstock veneer and pearl logo without the dot on the lower-case letter I.

Getting the full “Hi-Fi” sound Les intended with the Personal model required either plugging straight into a recording console or getting Gibson’s LP-12 amp like the one Soutar bought in 2015. Its cab has a solid state 190-watt amp running two 12″ speakers and two treble horns. The head could power up to 10 of the cabinets, delivering nearly 2,000 watts of the clean power.

“Thanks to a setup done by Rusty to Les’ liking, this guitar plays precisely and sounds incredible,” Soutar said. “It can mimic many sounds at the flip of a switch and does Les’ 1940s ‘New Sounds’ beautifully. I am really lucky! It reminds me of him and Rusty.”