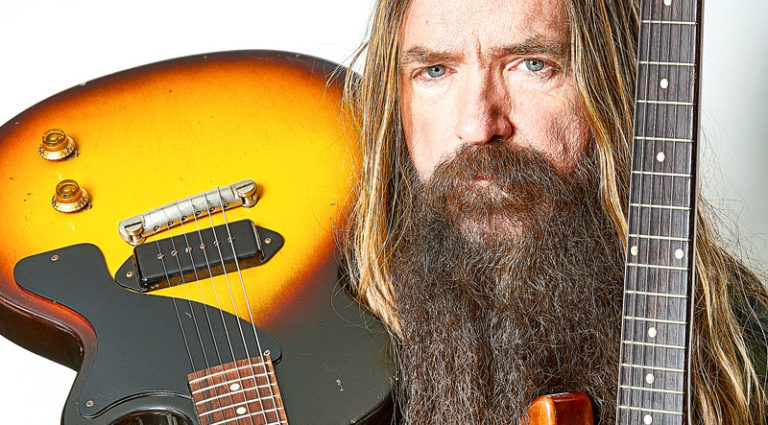 Best-known as Ozzy Osbourne’s longest-tenured guitarist, Zakk Wylde has also been the leader of Black Label Society since the late ’90s. With Ozzy off the road in 2021, Wylde has made the most of his time; not only has BLS issued a career-encompassing 12-LP box set, None More Black, but there’s a new studio effort, Doom Crew Inc., which sees Wylde once again joined by guitarist Dario Lorina, bassist John “J.D.” DeServio, and drummer Jeff Fabb.

Wylde spoke with Vintage Guitar just before BLS embarked on its Doom Trooping Over North America tour, discussing both BLS releases, his go-to guitars, and some of his favorite vintage fiddles.

What was your overall approach to making Doom Crew Inc.?

Just like every Black Label album, I approach it like it’s a new season. Whether you win the Super Bowl, just made the playoffs, or had a horrendous season, it’s always exciting going in, and it’s brand new. I always look forward to it. It’s the bottom of a Cracker Jack box – you don’t know what you’re going to get. We had a blast doing Doom Crew, but with the pandemic it was like, “I guess we’ll just record and have it in the can.”

Whenever you do a record, you’re on to the next one anyway. You’re like, “I’ve already written other songs,” and you’re always most excited about what you’re currently working on.

Dario had an expanded role this time.

It’s an evolution. When we did Catacombs in 2014, I started doing harmonies in the guitar solos or the intro for the solos. Like the Allman Brothers, you need two guitar players in the band – just based on the fact that there’s so many harmonies going on, you need two guys. Before, if I was playing piano, I needed somebody to play solos. And if we have an acoustic thing, we need an electric to cover the two parts. I wanted Dario to have more fun and have more to do. Like, “Dario, double the solo on this part with me.” And obviously, he’s doing all the solos when I’m playing piano.

For this one, I was going to write for two guitars on the solo sections. There were certain solos, like with “Set Me Free,” where I wrote the whole solo but said, “Dario, you play this part, then I’m going to play this part, then you play this part, and then we’ll end together.” But on others, or when we play live, we might have an extended jam in “Fire It Up,” where we trade-off solos. It was an extension of that. Dario has a studio in Vegas – the Dark Chapel – and I’ve got the Black Vatican here. So we’d send tracks on ProTools.

Yeah, I used Nomads on the whole album. I was double-tracking guitars with one on the left side and another on the right. I basically did the whole record with those two. It sounded slamming, so I was like, “I might as well just stick with that,” which I’ve pretty much always done. Once a guitar sounds good, it’s like, “Alright. Let’s do this.” Certain solos – not that I needed to pick up another guitar – but I was like, “Ah, let me play this one on this solo.” It wasn’t like the difference was drastic, like I was going from a Telecaster to a humbucker guitar. I just felt like using another guitar. I had a couple Heathens here in the Vatican, and I was like, “Let me try this one on the solo.” And then, “Let me try a Nomad on this solo.”

Earlier in the year, BLS issued the None More Black box set.
I can’t believe the band has been together 20 years – it’s just flying by. But yeah, putting that together was fun, taking a trip down memory lane. I remember looking at guitar magazines in the ’80s with Keith Richards on the cover – “Keith Richards: 16 Years in the Rolling Stones.” (laughs) That was a milestone. The fact anyone in a rock band was still alive after 16 years and that any rock band was still around for 16 years… I look at that and think about Black Label being around even longer.

You were a longtime Les Paul player. What originally attracted you to it?

Pretty much all my heroes played them – Jimmy Page, obviously, Randy [Rhoads]. All the ’70s guitar players – whether it was Thin Lizzy and all the classic rock bands – everybody had a Les Paul, so I thought they were really cool. But I remember when I played a Custom compared to a Standard, a Custom has got more bells and whistles – binding, headstock inlay. I guess it’s like with Strats and Teles. You have your Tele guys – like Danny Gatton and Albert Lee were always Tele guys. Whereas Robin Trower is always a Strat guy, or Jimi Hendrix. And then you had the Les Paul Custom guys and the Les Paul Standard guys. Slash is a Standard guy, Jimmy Page is a Standard guy. Mind you, I’m sure Slash owns a ton of Customs, but live, he’s always playing Standards. I was always more of a Custom guy. The weight, and I also liked the ebony fretboard. Standards have rosewood, but they both sound great, so you can’t go wrong. It’s just a preference thing.

How did you come up with the bullseye design?

Originally, I wanted the design from the poster for the Alfred Hitchcock movie [1958’s Vertigo]. I remember seeing that and thinking, “That’s a cool design! I’ll put that on a guitar.” Then when I was getting ready to do a photo shoot for guitar mags, I had my buddy, Max, paint it. I opened the case, and it was a bullseye. I was like, “Bro, it’s a bullseye. I wanted the Vertigo thing!” And he’s like, “Oh. I f**ked up.” (laughs) So that was it.

How did pinch harmonics become part your style?

I remember my guitar teacher, Leroy Wright, showing me how to play “La Grange.” Billy Gibbons, of course, is the godfather of the pinch harmonic – that’s where I got my beard and pinch harmonics (laughs). Plus, he played a Les Paul. Anyway, I was like, “What is that sound?” And Leroy was like, “Let me show you.” Then it was just a matter of practicing. When I was recording with Ozzy, they doubled them and I was like, “Wow! They really jump out.” It sounded cool, so that’s what I started doing.

What is your current amp and effects setup?

I’m using my Wylde Audio Master 100s. I’ve been using those since around Grimmest Hits. And I still have all of my signature Dunlop pedals. It’s pretty much my same setup. I never understood “tone chasers” I’ve got buddies who are constantly mixing and changing things. When you hear Billy Gibbons play “Tush,” you think, “That’s all you need – ever.” Or King Edward on “Eruption” and the first two Van Halen records, it’s like, “Whatever that amp is and that setup, you’ve found it.”

For me, from “No More Tears” or “Miracle Man” onward, it was my JCM800 2203s. I remember once, when one of the heads was dropped and the tubes broke; it had EL34s, but my buddy who took it to get fixed said, “Zakk, all the shop had was Groove Tubes 6550s.” But we plugged it in at sound check, and it was so much thicker and tighter than the EL34s. It was super-noticeable. That’s when I realized the nuances with power tubes.

The same thing with EMG pickups. The first time I ever heard them was when one of my guitar students had a Fender Mustang with EMGs. I was like, “What are those?” He goes, “EMGs; you gotta put a battery in them.” I had my Les Paul with PAFs and a ’79 Marshall 50-watt combo, and when he plugged into my amp, the difference compared to my guitar was like someone took a blanket off the speakers. It was that noticeable. I was like, “Whoa. That is what that amp’s supposed to sound like.” I was sold on those pickups right there and then.

They became part of what you call “the soup”?

Yes, certain little things make the soup. You take any player and put them through any guitar, they’re going to sound like them. It doesn’t matter if it’s Keith Richards, Eddie Van Halen, Eric Clapton, Robin Trower, Frank Marino, Al Di Meola, John McLaughlin – you put them on the same guitar/same amp, they’re all going to sound like themselves. Being on the road with Yngwie [Malmsteen], Steve [Vai], Nuno [Bettencourt], and Tosin [Abasi], they all sound exactly like themselves the minute they pick up a guitar. You can put them through the same rig – they have a different touch. It’s amazing how you can identify them immediately. But certain ingredients in the amp constitute the soup; a lower-watt speaker is going to distort more than a higher-watt speaker. That’ll have something to do with your sound, as well. I’ve tried different amps and setups, but it’s always the meat-and-potatoes setup that works best for me.

Do you have a few favorite vintage guitars?

When we were working on Ozzmosis in 1995, we were in New York City with [producer] Michael Beinhorn, and he rented a ’58 Junior that he then bought for me as a gift. It was amazing. I still have it, and Les Paul signed it for me. I also bought a ’65 when we were there. Both are original – I’ve never touched them. And, Ozzy got me, for my birthday, a ’57 Junior because he told me, “Zakk, when [Black Sabbath] came to the States, we opened for Mountain, and Leslie had the hugest guitar tone….” And I remembered Leslie West had a single-cut Junior.

What’s the story behind your two SGs?

The Pelham Blue SG Firebrand was the first Gibson I ever got – I was 15 or 16, and my teacher, Leroy, went to get it at Red Bank Music, in Red Bank, New Jersey, with my parents. I remember the slogan, “A Firebrand for under a grand,” and I did the majority of my learning on that guitar. I still break it out and noodle on it – it brings back great memories. I think it’s an ’81. Same thing with the ’65; I think I played “See You On the Other Side” on that.

From a guitar perspective, do you look back at certain songs or solos with more gratification compared to others?
Well, on Instagram, if anyone covers something I’ve played, it’s probably the “No More Tears” solo and the “Mama, I’m Coming Home” solo. With Black Label, probably “Stillborn.” There are other things I’ve done recently, like the Book of Shadows record. But with all of it, I can’t complain. I’ve been truly blessed that I’ve had a really fun ride. And I’m really happy with how the new stuff came out. Every record I’ve done, I look back and go, “That came out pretty cool.”

Does Ozzy plan on returning to the road?

Yeah, he’s still doing rehab after he slipped and banged himself up. The tour was going great and as far as he was concerned, he was going to tour for the next 10 years because we were having such a good time. Then we did the New Year’s Eve show in 2018 that came out great. Ozzy was saying, “Maybe we should do this every year?” Basically, it was a mini-Ozzfest.

Why should they stop it if they love doing it and still can? I never understood why anyone would want to retire from making music. It’s not like you’re boxing and you’re like, “I can barely walk anymore from all the surgeries.” I’m always the guy saying, “Well, maybe we should move into coaching.” (laughs)