Live-music fans who roamed South Florida from the early ’80s until the mid 2000s might recognize Craig Ball’s ’67 Rickenbacker 360/12.

Ball was lead guitarist in the Rockerfellas, a band that was steadfast on the scene, playing ’60s rock – Beatles, Stones, Kinks, Byrds, Hollies – at joints like the Candy Store, The Button (and Button South, where they opened for the Kinks), Washington Square, and Bayside. One day in ’82, Ball and his bandmate, Drew Berlin (now a noted guitar dealer), paid yet another visit to their friends Ed and Michelle Oleck at Ed’s Guitars, in Miami, where they often stopped to browse.

“It looked way better than the Montezuma Brown Rick 12-string I was using at the time – the patina on the crushed-pearl inlays was incredible! Plus, mine didn’t have the toaster pickups,” he said. “It was love at first sight – and sound (laughs).”

Ball and Berlin had jammed together in bands since junior high in ’64, and each had several cool axes; Ball got good mileage from a ’59 ES-335 and a ’72 Les Paul Deluxe he modded with humbuckers, while Berlin played a ’56 Les Paul Custom, a Rick 330, and two Epiphones – a Broadway and a Casino. But the Rockerfellas covered a ton of folky pop tunes, and Ball needed an electric 12 to play stuff like the Beatles’ “Can’t Do That,” the Stones’ “Ruby Tuesday,” “As Tears Go By,” and “19th Nervous Breakdown,” the Byrds’ “Mr. Tambourine Man,” “Eight Miles High,” “Turn! Turn! Turn!,” the Mamas and the Papas’ “California Dreamin’,” The Hollies’ “Bus Stop,” and The Kinks’ “Tired of Waiting for You.” So…. 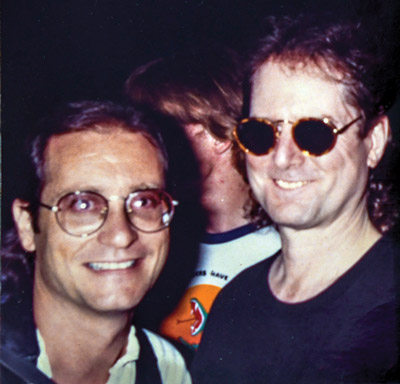 In ’83, The Rockerfellas made local news by playing every night for four months at Art Stock’s Playpen, in Fort Lauderdale, when that city was the best place in the world for spring break. Hard to miss, they were part of MTV promos and their gigs were advertised via banner planes flying over beaches. And of course, there was a Rolls Royce limo (“That’s a whole other story!” Ball says).

Anyway, the Rick can be heard on the band’s song “Everything I Say” from the 1993 compilation album Jimmy Buffett Margaritaville Cafe Late Night Menu, but its story extends beyond the Rockerfellas. In 2001, it appeared in a music video by the country-pop trio The Alice Band, where Amy Lindop is shown using it to pick the melody of “One Day At A Time” (the group’s first and only album was produced by Giles Martin, son of Beatles producer George Martin). A singer/songwriter from Glasgow, Scotland, Lindop later adopted the stage name Amy Belle and, in 2004, sang a live arrangement of “I Don’t Want To Talk About It” with Rod Stewart that has been viewed more than 500 million times on Youtube.