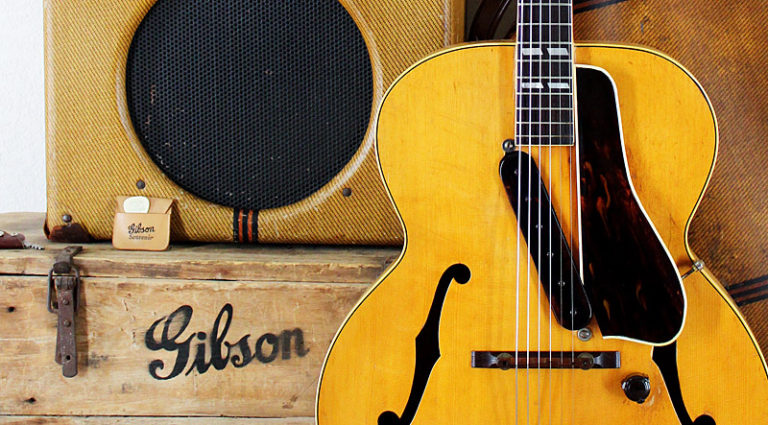 This 1940 ES-250 with serial number 96385 left the Gibson factory bound for retailer New York Band on October 25, 1940 – the same day as the first ES-300, which bore serial number 96384. It was once owned by longtime Gibson employee Wilbur Marker and its current owner, Billy Soutar, has spent years researching its story.

“The pickup was hand-made by Walter Fuller, who for years worked as Gibson’s electronics-lab supervisor,” Soutar said. “It has a hand-bent brass mounting bracket like that on Les Paul’s 1936 L-7, which Fuller converted to electric. This one, though, has individual polepiece risers with maple spacers between each, where the pole screws mount, like the individual poles on the ES-250 ‘Charlie Christian’ pickup Walter created, but hidden under the celluloid cover. Unlike the ES-300 pickup, the top cover on this has countersunk holes to accept the polepiece screws.”

Other details include a hand-shaped neck, “…very thin, rounded, and 15/8″ at the nut, like on a Byrdland,” Soutar noted. “The quality and figure are spectacular, like a period L-5.”

The tuning gears are Kluson Sealfast units with amber keys, similar to the L-5 and Super 400 of the late ’30s/early ’40s.

“At some point, it was returned to Gibson, then shipped back to New York Band on March 4, 1941, this time listed in shipping logs as an ES-300. After being returned to factory again, it was marked ‘sample’ and went home with Wilbur Marker. By then, it was considered obsolete!”

Enter the P-90 pickup. Soutar recounts that a one-off/prototype ES-12 (serial number 95354) that shipped in April of ’38 had adjustable polepieces on its pickup, which means Fuller had developed them by that point. Records also indicate that on July 12, 1940, Gibson returned Les Paul’s L-7 to him after Fuller mounted the first diagonal pickup in it.

The EH-185 amp has serial number 16148 and once belonged to Les Paul. One of the earliest, it has the short-lived Thordarson tone circuit with separate Treble and Bass controls, which he later incorporated on the Les Paul Recording guitars.

“Les loved 185s made in this timeframe,’” said Soutar.