The Epiphone Emperor has a long, convoluted history. It first appeared in Epiphone’s catalog in late 1935 as a response to Gibson’s Super 400, which was introduced in late 1934.

Epiphone went one better on Gibson’s 18″-wide Super 400 by making the Emperor 18 1/2″ wide. This was the top model in the Epiphone line. By 1937, the elaborate trapeze tailpiece was replaced by the classic Epiphone Frequensator, with separate sections for the three bass strings and three treble strings. The original inlay pattern on the fingerboard of the Emperor consisted of three separate pieces of pearl. The abalone wedge in the center of pearl block inlays was introduced in the 1940s.

Although Gibson introduced its Premier model cutaway guitars in ’39, Epiphone did not follow with the cutaway until about 1948, when it designated cutaways as Regent variants. The Zephyr designation in the Epiphone line indicated an electric guitar. The Zephyr Emperor Regent was introduced in 1950 featuring a full-depth 181?2″ body, three pickups, and a six-pushbutton switching system for pickup selection. This system proved less than ideal, since it was quite noisy such that when the player switched it would send a loud pop through the amp.

In the ’50s, the Epiphone company encountered financial difficulties. In 1957, the company was sold to Chicago Musical Instrument, owner of Gibson, and production was moved to Gibson’s facility in Kalamazoo, Michigan. New Epiphone models made by Gibson were introduced at the annual trade show in 1958, but few instruments actually shipped until ’59.

The Gibson-made Epiphone Emperor electric was quite a different beast from the earlier New York-made Epiphones. The Gibson-made model still featured an 181?2″ single-cutaway body, but it was shallow, similar to an ES-335. Those made from 1958 through 1960 used original New York-made Epiphone pickups, but by ’61 the model featured mini-humbucking pickups. The inlay on the peghead featured the vine of the same style used on the New York Epiphones, and the fingerboard inlays with pearl blocks and an abalone-V center wedge are the same style used on the New York-made Emperors. The pickup switching system, however, is quite different. 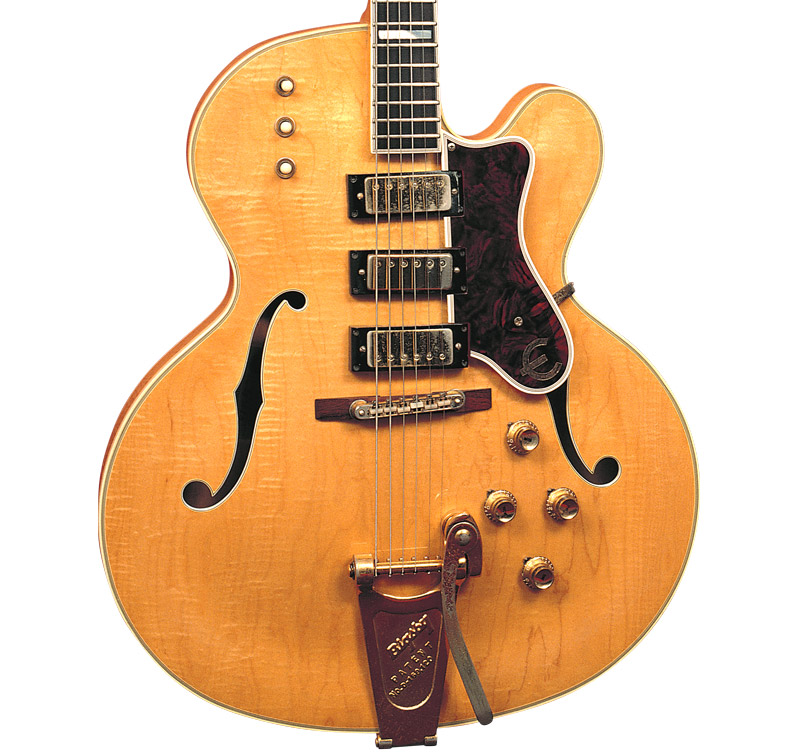 These guitars feature two volume knobs and two tone knobs, as is typical of a Gibson, whereas early Epiphones had only one volume knob and one tone knob. Rather than the awkward six-pushbutton system, the typical Gibson-made Emperor electric features one three-position toggle such that the wiring is like a Les Paul Custom or SG Custom with three pickups. In that system, the three-position switch gives a normal lead sound and normal rhythm sound, but the middle position gives the middle pickup and bridge-position lead pickup out-of-phase, for a super twangy sound – there is no normal “middle” sound.

This particular guitar is a custom-order instrument featuring a Bigsby and three on/off switches. We’ve never encountered another Gibson-made Epiphone with three such switches, but it gives great versatility of sound. With three on-off switches, a player can get any combination of pickups, and the versatility is vastly greater than what can be achieved with one three-position toggle. But it certainly isn’t perfect, and one could also argue that three volume controls and three tone controls would have been better. Still, as it is, this is an amazingly versatile and fine-sounding guitar, as well as being an extraordinarily rare and high-quality collectible.

The Gibson-made Emperor never sold in large quantities. By 1963, the model was available only on special order, but Gibson continued to make it through ’69. Since 1970 (when Gibson was acquired by Norlin) Epiphone has been an import line. In the ’70s, Epiphone Emperors were altered to use a full-depth 17″ body similar in size to a Gibson L-5, and were given two full-size humbucking pickups. These guitars were made in Japan under the Epiphone name for distribution by Gibson. From the ’80s onward, Epiphones have been made in Korea, and the Emperor model of this period, though it features the vine peghead inlay and abalone wedge fingerboard inlay, features a much smaller body size and differs in shape from any of the Gibson models such that it is distinctly different from both the Japanese-made Emperor and the Kalamazoo-made Gibson, as well as the earlier New York-made Epiphone models.