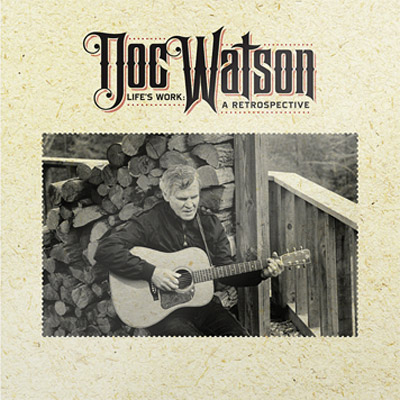 Doc Watson, the iconic guitar master from Deep Gap, North Carolina, emerged during the early-’60s folk revival. Nearly a decade after his passing, he’s revered for flawless flatpicking, Merle Travis-style thumbpicking, and his warm vocals. This chronologically arranged four-disc collection begins with a 1941 recording, followed by Watson in the mid ’50s, picking a Les Paul and singing with a rhythm section.

Whether playing Martin dreadnoughts or his beloved Gallagher (see our review of the Gallagher Doc Watson signature model in the January ’22 issue), Watson’s style remained fluid and rich. He drew from traditional tunes to songs by George Gershwin, Dan Fogelberg, and even the Moody Blues. Life’s Work features him in a variety of settings. There are solo performances, and many with son and longtime collaborator, Merle. He’s also heard with Bill Monroe, Flatt & Scruggs, and the Nitty Gritty Dirt Band. With fellow guitar icon Chet Atkins, he amiably sings and picks the 1940 country ditty “Don’t Monkey ’Round My Widder.”

The set abounds with his mastery, particularly on the flatpicking showcases “Dill Pickle Rag” and his signature instrumental, “Doc’s Guitar.” Among the great thumbpicking moments is a live “Deep River Blues” with Merle. Watson is particularly moving on an exuberant 1990 jam on the instrumental “Salt Creek” with his two greatest flatpicking protégés, Norman Blake and Tony Rice.