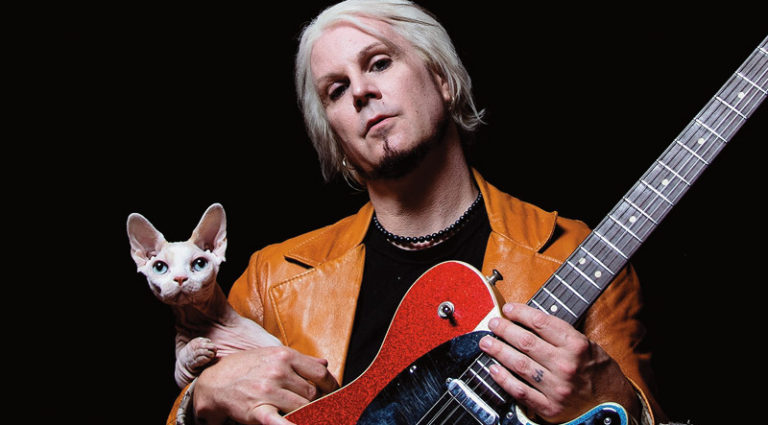 On his latest album, John 5 stays true to himself as he dips into his famous bag of Tele tricks with mastery and humor. Mr 5 does it all, from shred metal to rockabilly, but what especially shines through is his love and unyielding devotion to the electric guitar. He invited excellent guests, but at the crux of Sinner is 100 percent wicked guitar music.

Are you the master of time management?
(laughs) I try to manage my time, for sure. I’m very particular with it, but I love to practice; I practiced just a few minutes ago. It’s a comfort to me. I got my first guitar at age seven, and now it’s like being an adult with your Woobie (laughs). Everything is scheduling, and you have to communicate a lot. When I work with Rob Zombie, I know what he likes, and I know what he’s after. The most important thing is that I listen to what he says, not what I might want to do. I’m not going to say, “Oh, I’ll just play this!” I listen. That helps a lot.

What was your vision for Sinner?
Just to do the best of what I do. I love playing cool riffs and hooky songs, and I like playing crazy guitar on top of that. I also tried to do everything completely live. It was a challenge, but worked well. I was listening to ’40s Junction on SiriusXM, and it’s interesting because all those songs were done live back in the ’40s. It’s incredible to think that there were so many instruments and vocalists, and it was all done live. I practiced and practiced, then went to the studio and did it from take to take, beginning to end. So, it’s a very honest record. I’m not trying to be someone I’m not. This is the exact same stuff I play when I’m sitting on the couch.

Most well-known guitarists have to stay in their lane. Your fans expect rockabilly, metal, country, and jazz on a John 5 record.
It’s a pleasure. To me, it’s like watching different kinds of movies. Sometimes you want drama, comedy; sometimes it’s food – a documentary – same thing with clothes. You don’t want to just do the same thing every day. It reflects how I am. It’s a joy to be able to play different styles of music. “How High The Moon” which is just clean Tele, is one of my favorite tracks on the album.

Which guitars did you use?
Well, I did all this during the lockdown and when I called my storage unit, they said, “Sorry, you can’t get in.” So, I did the whole thing on two guitars – mainly Goldie, my signature Telecaster. It’s on every record and every show. It’s like when you date a bunch of girls, then find one and say, “I think I want to marry her.” It’s that way with this guitar.

That’s a nifty slapping technique on “This Is How I Do It.”
I learned to play that stuff sitting on the couch. I came up with a cool riff with these cool noises – there’s no effects. I have it on the rhythm pickup, and I’m scraping my thumb nail toward the bridge. I like Fat Boy Slim and stuff like that where there’s a little vocal hook to it. “Que Pasa” came from a James Brown sample. We couldn’t keep James Brown, so while I was on my Megadeth kick, I said, “Try to get Dave Mustaine.”

It was cool to hear Peter Criss swing with you on “Georgia On My Mind.”
I love that intro because it’s Peter and my producer, Barry Pointer, talking while the mics were on. Peter didn’t know, and they were just chit-chatting. It was so special and so honest, and then boom, the song comes in. I thought it was a cool way to end the record. I’m very happy with the record, down to the cover.