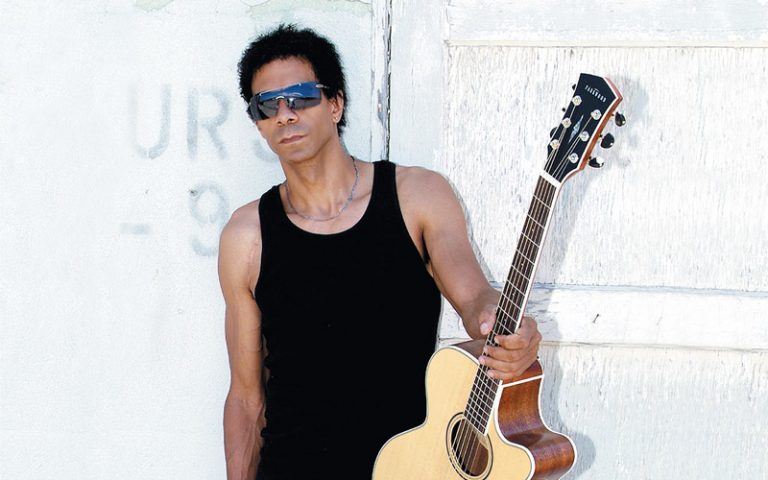 Nimble-fingered fusion monster Greg Howe has been keeping busy since the release of Extraction in 2003. He has appeared as a guest on a number of stellar fusion projects, most notably Rhythm of Time by Jordan Rudess and the fusion tribute releases, A Guitar Supreme and Visions of an Inner Mounting Apocalypse.

Vintage Guitar: What have you been doing since Extraction was released?

Greg Howe: I’ve been writing. I have a lot of material for a new album. I don’t want to say for sure, but it looks like it might feature Dave Weckl on drums. We haven’t decided on a bass player but we’ve been talking with John Patitucci. There might be a lot more acoustic stuff. Possibly Afro-Cuban feels, but I’m not sure.

My main focus has been on this Players Playground website. I don’t want to say too much about it because I feel so good about what we’re going to be offering. I don’t want some other company to grab hold of the idea.

Is it online lessons?

That’s only a portion of what it’s going to be. The other things are going to greatly contribute to the benefit of this whole genre of music. Keeping it alive and keeping a lot of these musicians who are legendary who aren’t making money, working.

So, you’ll have well known players as guests?

Oh, yeah. Originally, this was intended for me to address my fans and it was going to be very Greg Howe proprietary. The more we’ve been developing it the more I feel like I want to get other people on board with it. I want to reach out to all kinds of people. I really want to do something meaningful that affects a lot of people. Not just fans of this music and practicing musicians of this music, but actual players and artists who are currently making this music.

How will this be different from other lesson sites?

My problem with the guitar community, in general, is that there seems to be this competitive-driven stuff happening, this underlying testosterone driven thing. You never hear about saxophone wars. I’ve never heard anyone say, “Chick Corea blows away Herbie Hancock.”

Outside of the guitar community, people aren’t really thinking that way. They’re thinking, “That’s a great artist who does this thing,” and “That’s a great artist over here that has a different flavor.” After a certain point when these guys reach a certain level it’s not at all about who’s better or who’s not. It’s just about what an artist is bringing that makes them an artist. What picture are you painting that’s unique that I can’t get anywhere else but here? What have you created that makes me go, “Wow, I can’t get that anywhere else!”

I think I’m good at being Greg Howe. I’ve seen guys who can sit down and play country, jazz, and fingerpicking. I’m not like that, but I can bring the Greg Howe flavor in a true organic, sincere way. That’s all I want to do, and all I really want from another artist.

Honest expression, as opposed to chops.

Or the lack of chops… As much as there is focus on chops, there’s also focus on, “He doesn’t have great chops, but he has great feel.” A guy isn’t better because he has chops. A guy isn’t better because he has more feel. A guy is better when he’s figured out what it is he does well and how he uses that in the presentation of his art. Are a lot of notes bad? Sometimes. A lot of notes can be absolutely the most appropriate thing to play. In some other instance, it might be the absolute worst thing to do.

When it comes to expression there’s no right way or wrong way. It’s about what you’re bringing that’s sincere.

You have a signature guitar coming out.

Peavey is making a guitar similar to their HP Special, which is a beautiful guitar. I hate doing this because it comes across so phony, but I’ve played so many guitars over the years. It comes down to what works for you. It’s the most comfortable electric guitar I’ve ever played. I think they modeled it after the Wolfgang. It has an asymmetrical maple neck shape. I like the layout, body shape, the way it sounds, and the way it responds.

I’ve been playing through a Cornford MK50. It’s a really focused amp, relentless and unforgiving. It hears everything clearly, including all mistakes. The HP Special works nicely with that amp.

What advice would you give to guitar players in search of their artistry?

Instead of asking, “Do I sound as good as this guy?,” ask yourself if you’re doing something unique. “Have I painted a picture you can’t buy across the street?” – Oscar Jordan