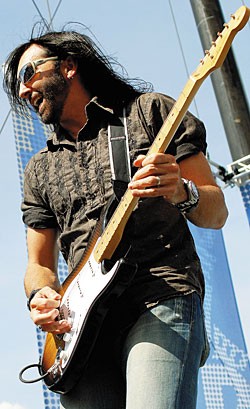 Damon Johnson is a working man’s player, honed on the chops of Skynyrd and Zeppelin. His technique and influence spawned the early-’90s rock band Brother Cane, which released three albums, toured with Van Halen, and scored a handful of radio hits. Following its demise in 2000, Johnson played as a sideman, band member, and even “unplugged” in coffee shops.

Four years ago he auditioned for Alice Cooper and then enjoyed a three-year run with the singer. In ’07 he found his dream job – playing lead guitar and singing with Whiskey Falls, a band that blends vocal textures with rich guitar musicianship.

When you hired on with Alice Cooper, what did you bring to the table, guitar-wise?
I tried to simplify it a little bit. Alice has gone through phases of guitar players who were either really heavy or the speedy technical guys. That’s not my style. He also had guys who were into glam – also not my style. Those songs were way more about great guitar tones and great parts. I had a lot of fun taking it back to that classic tradition that those songs have. I had the liberty to approach those songs any way that I wanted. He never told any of his guitarists to play something a certain way. He always wanted your own style on it.

What was the high point for you in the band?
When I moved to stage left by myself. I got to open the show with the classic riff of “No More Mr. Nice Guy” or “Eighteen.” That’s every schoolboy’s dream. I grew up on Love it to Death and Killer, so those were pretty awesome moments.

Alice has always leaned towards L.A. players.
To be honest, when I auditioned I even told my wife, “I don’t know if they’re going to pick me because I’m not that at all.” My influences are much more classic rock – Paul Kossoff and Pete Townshend, Jimmy Page and the guys in Skynyrd. My favorite is Thin Lizzy. Alice took us to Dublin, so I got to visit Phil Lynott’s gravesite. The following week, I met Scott Gorham. If there’s one guy who I’ve tried to rip off, it’s Scott. He has that perfect blend of blues-influenced rock fire, and he’s incredibly melodic.

Stylistically, how did you shift from classic rock to the country of Whiskey Falls?
My parents always told me to be as diverse as possible in my playing and my listening tastes. They brought me up on country music. When I first started playing the bars, I had to play as much Merle Haggard and Hank, Jr. as I did Van Halen and Aerosmith. It’s always been a part of my vocabulary. Whiskey Falls may be the most natural place I’ve ever found myself as an artist and a guitarist.

Are you still playing Les Pauls?
I’m eternally a Gibson man, but the truth is ESP has been very good to me. I’ve got 10 ESPs, and I play all of them. The Eclipse is my favorite because it’s more of a classic-style guitar. Matt (Masciandaro) and Allen (Steelgrave) were excited to work with me cause I wanted body styles and wood grains, things that were more classic and almost vintage looking. They made me a Pearl White Eclipse and an amazing white three-pickup Viper with the SG body style.

You also play a Burns.
Burns is a British company that goes back to George Harrison and David Gilmour. They make a guitar called the Sonic. It has two single-coil pickups, the Tri-Sonics. They’re the exact pickup Brian May put in the guitar he made with his dad. It’s a very different sound – unique to anything I’ve ever heard. It’s a great guitar to play slide on.

How about acoustics?
I use Crafter Acoustics. I started playing them in Alice’s band when they were good, but not great. Now I’m playing a DV250/VTG and it’s incredibly resonant, like a Gibson Hummingbird. There a lot of body and warmth so when I play impromptu acoustic shows I can go higher on the neck with single notes. I have a lot of guys tell me they heard every note I played even though I’m playing over the whole band.

With Alice, you play Wizard amps.
After my first year with him, I got a chance to work with my friend Rick St. Pierrre, who makes those amps in Canada. They’re incredibly loud – too intense for clubs. For Alice’s style and those classic songs, they were perfect. They were the style and the sound I wanted to bring back to Alice’s live show.

What are you playing with Whiskey Falls?
I use a Samamp VAC25 Combo, the 1×12 version. You can change the wattage from three to five to 11, 18, and 25 watts. It’s a class A amplifier, and it’s awesome to be able to control the volume. One day, we were playing small clubs to 150 people, and the next day opening for Montgomery Gentry to 12,000 fans. The amp kicks ass in any setting and gives me the sounds I need for country.

How else do you keep it country?
I use a lot of single-coil guitars. I’ve got an incredible ’54 reissue Fender Strat, and the ESP Vintage. Between the Fender, the ESP, and the Burns, I’m able to play a lot of different parts because there’s a need to come up with a lot of different sounds all of the time.

Why should guitar players care about Damon Johnson?
Truthfully, I’ve got a lot more in common with the average guitar player then the superstars who sell out arenas. I’m just a blue-collar player no different then a guy who loads his amp in his car every weekend. I’ve never had a gold record, I’ve never had a million dollars, but I’ve been lucky to raise a family and put food on the table by making music for more than 20 years.


This article originally appeared in VG‘s
February 2008 issue. All copyrights are by the author and Vintage Guitar magazine. Unauthorized replication or use is strictly prohibited.
Whiskey Falls – Last Train Running