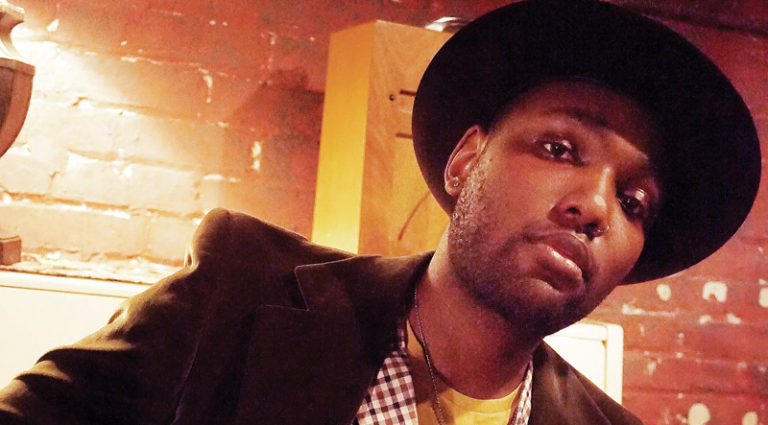 It’s difficult to pigeonhole the music of Naia Izumi, a singer/songwriter who’s also one of the most uncanny guitarists around.

“I make music I’m not hearing,” says Naia, who was diagnosed with autism at the age of 16. On his new album, A Residency in the Los Angeles Area, he uses two-handed tapping, chiming chords, whammy-bar swoops, and a complex ear to craft a variation of modern soul music. Some of the guitar licks and chords may sound like electronic effects or multiple guitarists, but it’s all Izumi. Add his mellifluous vocals and you have a truly singular collection of songs.

Naia gave VG a glimpse into his organic, intuitive approach.

Most guitarists use two-handed technique for flashy solos, but you use it as part of the groove and harmony in “As It Comes.” Who are your influences?
Nobody, really. I’ve hardly ever listened to any lead guitarists and, if I do, it’s more after the fact; someone might say one of my solos sounds like so-and-so, but I’ve probably never heard that person, so I might check out their music.

My music is really about my way of thinking, and letting it come out – I find influences everywhere. I’m a conceptual and objective thinker, so I listen to everything separately and take little pieces out of the weirdest little places. Ultimately, it’s not a matter of who I listen to – I listen to the various sounds and timbres, and think about how can I use that in my own music.

You guitar groove is meticulous. Are you also a drummer?
I’m not a drummer – I’m just black. My blood is rhythmic. It’s in my heart and soul, and as a black man, it’s just there. I did learn to play drums later on, but it had nothing to do with my guitar playing.

Your sense of chord harmony is pretty sophisticated, as in “Voodoo.” Did you study music theory?
To be honest, I just figure stuff out, crash into walls, and create my own process. It’s just listening; I’ve been doing this for over 30 years now, so I’ve had lots of time to figure things out.

“Sad Song” has what sounds like layers of lush guitars. How did you build that, and what effects did you use?
I barely use any effects – the only thing I used there was one guitar with an auto-wah sound on it. Instead of using it in the percussive way most guitarists do, I used it more of a filter effect, letting it slowly do its thing. There might be an acoustic guitar on that track, I don’t really remember.

Your guitar doesn’t always sound like a guitar – it’s like an ethereal keyboard pad. Are there backward effects?
No, it’s mostly just the Volume knob on my guitar. I use the vibrato and some reverb, but I don’t use a whole lot of effects. There’s a little amp overdrive, too.

What other gear did you use on the album?
Mainly my Fender Jazzmaster and Deluxe Reverb, some overdrive, and the controls on the guitar – the pickups and switches, and how I manipulate them. It’s a super-simple approach; I prefer to use basic stuff in a creative way.

Talk about your writing process. Does a song start with chords, taps, or lyrics?
I think about it this way: If all sound is vibration, then what is vibration? It’s rhythm. And what makes these sounds unique are the different kinds of rhythms inside the vibrations, their different speeds and pitches. So that’s my process – I just come up with rhythm, find a melody, and figure out a low note to use as a contrast to fill in the space.

Did your playing evolve at the same time as your vocals? They blend like one instrument.
I’ve been doing this stuff for decades and making a lot of mistakes – and sounding like s**t much of the time. But when I fail, I learn from it. I absolutely hate singing, but there’s nobody else that had the intelligence and competence to sing around the stuff I create as a guitar player. So many other singers want to sound like everyone else; I love making music so much that I decided to embark on the journey to teach myself to sing what I heard in my imagination. I’ll never be able to do it exactly right, but I can get close; the timbre of my voice isn’t what I want, but that’s my personal secret. It took a lot of time and sacrifice, but my music has gotten to the point where it all blends well. Developing your own style is really something you have to be patient about. The whole thing is a process and journey.