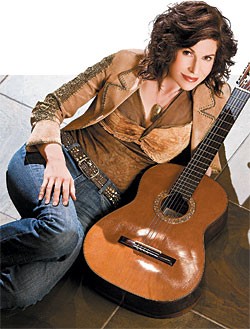 Sharon Isbin is regarded as one of the premier classical guitarists of her generation, playing 60 to 100 concerts per season and earning a Grammy early this decade. Among her teachers was the venerable Andrés Segovia, and she has collaborated with rock and jazz aces like Steve Vai and Larry Coryell. Isbin’s latest CD, Journey to the New World, is a colorful crossover set featuring diverse artists such as singer Joan Baez and violinist Mark O’Connor.

What prompted you to make an album that brings together folk melodies of the British Isles with the sounds of Colonial America?
It all started with the “Joan Baez Suite,” written for me by John Duarte and based on songs like “House of the Rising Sun,” “Lily of the West,” and others. After hearing the suite, Baez offered to sing on the recording. Her voice and musical integrity has moved me to tears for as long as I can remember. She’s also a wonderfully warm, generous person, and working together was amazing. I then invited Mark O’Connor to join. His “Strings & Threads Suite” for violin and guitar is full of reels, jigs, waltzes, blues, rags and swing, which fit the theme perfectly.

Playing with Mark must be exhilarating.
His background as a guitarist enabled him to write a rich and dynamic guitar part for me in “Strings & Threads.” He is an impeccable musician whose mastery of various folk styles of violin playing and genius at improvisation are such a joy. We spent several days editing the score and rehearsing before premiering the work at Orchestra Hall in Minneapolis. A month later we recorded it, playing onstage as if in concert.

Where does the folk/classical connection come from?
The journey of American folk music begins in the British Isles, so I open the CD with Renaissance duets in which I play both parts, bridging American and British styles from the 17th and 18th centuries, then follow with Edward Flower’s brilliant settings of “Wild Mountain Thyme” and “Drunken Sailor,” and Andrew York’s haunting “Andecy.”

There are lute melodies on the CD, too. What do you like about that style?
I find Elizabethan music – notably that of John Dowland (1563-1626) and his peers – utterly enchanting. Maybe I was a court musician in a past life (laughs)! Hearing lute music from the Renaissance also takes me to a magical realm, one of unicorns on tapestries, suitors of romance, and joyous dances. The spirit, harmonies, and rhythms of the lute really resonate with me.

You’ve had a range of collaborators over the years, such as Steve Vai. Where did you find the musical bridge between his electric guitar and your nylon-string?
Steve and I first played together at events for the Recording Academy and I was drawn to his creativity, musical expertise, and delightful personality. When the Theatre du Chatelet in Paris asked me to give a series of concerts in 2005 and offered to commission a composer of my choice, I asked Steve to write a duet. His wonderful “Blossom Suite” was the result. Ever since my work in the ’80s with Larry Coryell and Laurindo Almeida, I’ve loved the combined sonorities of electric and classical guitar. 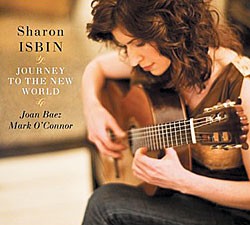 Sharon Isbin’s latest CD is Journey to the New World.

Tell us about your early guitar studies.
I started playing at age nine, when my family lived in Italy for a year. My older brother asked for guitar lessons and my parents found a teacher who had studied with Andrés Segovia. But my brother’s fantasy was to be the next Elvis Presley, so he bowed out, and I volunteered to take his place. After taking lessons in Italy and Minneapolis, I later studied classical with Oscar Ghiglia, Latin-American music with Alirio Diaz, and had private lessons with Segovia and [classical guitarist and lutist] Julian Bream.

Segovia had a reputation as a formidable teacher. Can you describe your experiences?
I was 14 when I first played for Segovia and my heart was beating so hard it made the guitar bounce back and forth against my chest. But he was very kind and I felt much more relaxed in subsequent lessons. The most memorable part was hearing his gem-like tone when he demonstrated passages. That was inspiring.

Who built your main nylon-string guitar?
I recorded Journey to the New World using a guitar built by the late Thomas Humphrey in 2007. It has a cedar top, Brazilian rosewood back and sides, and two beautiful muses painted on the back with flowing hair elegantly styled by the grain of the wood. It has a warm, chocolate sound, and trebles that ring like bells. I’m also now playing a cedar guitar by the Irish maker Michael O’Leary – it’s a wonderful instrument that projects with clarity, warmth, and resonance, and has excellent contrasts in sonority.

Do you have any older guitars?
I still have the guitar built for me in Italy when I began playing, as well as the pint-size guitar my parents brought back from Mexico when I was three! I have several other Humphrey guitars, and a guitar Japanese maker Kohno gave me in 1975, when I won the Toronto competition.

What other pieces of “gear” does a classical guitarist have, aside from the guitar itself?
I always carry a footstool, metronome, a Korg AW1 tuner, and fleece handwarmers with Hothands inserts. I also have whiteout for fret dots, a nail-repair kit, nail file, 2,000-grade sandpaper, a capo, pick, and strings.

In your opinion, what is the state of classical guitar in the 21st century?
It’s an ideal instrument to explore contemporary classical and other styles, especially since jazz, bluegrass, folk, country, rock, pop, and Latin American music have long figured prominently in the world of guitar. Audiences also welcome diversity, so artists who discover new modes of expression and fresh collaborations have the opportunity to create something exciting no one has ever heard before. I think it’s a great time to play classical guitar.


This article originally appeared in VG‘s August 2009 issue. All copyrights are by the author and Vintage Guitar magazine. Unauthorized replication or use is strictly prohibited.
Sharon Isbin Performs at the White House: 1 of 8