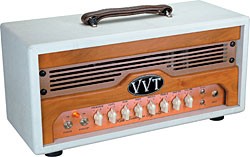 When VVT proprietors Tony Albany and Jim Hill began discussing a signature amp head with a guitarist Rick Derringer, whose style can shift from hard rock to blues to jazz, they figured they’d have their hands full. Derringer was already the proud owner of two VVT 6V6-based amps, but he needed something with more power for live gigs, two channels, and most important, something that could produce high gain without buzz. After testing a prototype four-6V6-powered head designed for him by Albany, Derringer was satiated, and suggested only a few cosmetic changes and the addition of a boost circuit. The VVT Rick Derringer Hyperdrive was born!

The Hyperdrive’s clean, eye-catching aesthetics include an ivory-tolex-covered cabinet that measures 20″ x 9″ x 8″, brushed-copper control panels, copper-finished vent panels, solid cherry-wood trim and a stitched leather handle (options include black tolex and figured maple wood trim). The front-panel includes controls for Gain and Level for the Overdrive channel, a Volume control for the Clean channel, shared Bass, Middle, Treble, and Presence controls for both channels, as well as a Master Volume control, mini-toggle switches for channel-switching and boost, and Power and Standby switches. The back panel hosts a power-cord plug, primary fuse holder, XLR footswitch jack, and four speaker-out jacks. 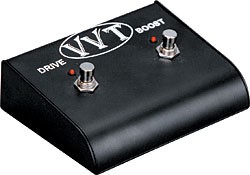 With the OD channel Gain and Level controls set at 8 and the Master Volume at straight-up 12:00, the Hyperdrive’s overdrive channel offers a thick, harmonically rich overdrive with plenty of classic rock crunch as well as a plentiful amount of gain. Even when the Gain is dimed and Level set to 10, the amp’s high-end response never becomes harsh or buzzy and the low-end stays firm, maintaining its clarity while sustaining single notes and rolling into controllable, singing feedback with the mid-boost engaged. The well-voiced Tone controls need be used only sparingly – between 2 o’clock and 10 o’clock – to adjust for the output of humbuckers or single-coils.

The clean channel produces a usable, sparkling clean sound, and the amp’s ability to switch between a shimmering clean and blistering overdrive is handy, but given the Hyperdrive’s excellent front-end dynamic response, the majority of players would really need only to roll off the Volume control on their guitar. The integrated/footswitchable Boost circuit essentially eliminates the need for a drive/distortion pedal, and adds just the right amount of gain and midrange to make single notes pop.

A pleasant surprise is how loud and in-your-face the Hyperdrive’s gain can be without causing significant ear fatigue; its abundant natural overtones make it much less trashy-sounding than the typical high-gain amp.

The Rick Derringer Hyperdrive, with its well-conceived design, harmonically rich tone, and cool vintage aesthetic, is an outstanding addition to VVTs lineup.