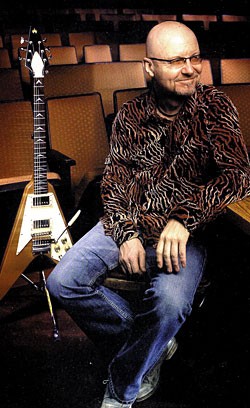 The early 21st century is a unique era for rock music, as many veteran bands are now plying their trade on the nostalgia and/or casino circuits, playing their decades-old hit(s) for people about their own age.

Wishbone Ash, now in its 37th year of existence, never had a huge hit in the U.S., and like many combos has one original member in Andy Powell. But the English-born guitarist, known among players for his legendary 1967 Gibson Flying V, has for a long time continued to direct “the Ash” in a defined musical direction, forging ahead with tours and albums, the most recent of which is Clan Destiny, released in May. Since our last conversation with Powell four years ago, the band has actively toured Europe on a regular basis, but the Ash has also been performing more gigs recently in the States.

Another turnover in personnel in the band has occurred since we last spoke with Powell. The longtime rhythm section of Bob Skeat (bass) and Ray Weston (drums) remains intact, but Finnish guitarist Ben Granfelt has returned to his solo career, and another Finn, Muddy Manninen, was recruited for the slot.

“Ben served in what were four really good years for the band,” Powell explained. “He left for personal reasons, and he’d also put his own band on hold. It was amicable, and he was a gentleman, giving me plenty of notice. He even got involved in finding his replacement, and he’d played in a band with Muddy years ago.”

Manninen brings a somewhat different approach to the band, favoring the P-90 sound of instruments such as Les Paul TVs. He also plays slide and lap steel.

Before the band recorded a new studio album, however, the new incarnation appeared live on XM Satellite Radio. It was Manninen’s fourth gig with the Ash, and while Powell described the event as “pretty hair-raising,” it went over so well that a limited-edition CD of the concert was marketed.

These days, Powell performs with a signature-model guitar with the classic, arrow-shaped silhouette of his Gibson Flying V. But it was made by veteran English luthier Kevin Chilcott. Numerous fans petitioned Gibson to make an Andy Powell signature model V, to no avail. Ultimately, Chilcott, who hadn’t created a guitar in about 12 years, offered to make a V-shaped instrument for Powell.

“I love to be able to mix acoustic guitar and electric,” Powell detailed. “We designed an instrument with a custom neck profile, a one-piece Brazilian mahogany body – which to my mind adds to the vibrancy of the sound of the guitar – and an L.L. Baggs system on the bridge saddles. I’ve ended up with a very multi-purpose guitar.

“He made two instruments,” Powell added. “I use one in the U.K. and Europe, and the other in the U.S. The first one was a prototype we called ‘Problem Child’, or ‘P.C.’ for short. The second one we called ‘Chamille,’ and he also refurbished my ’67 V – brought it back to life.

“Kevin is a phenomenal luthier; his attention to detail is incredible. But I did have some bad luck on the last song of the last gig of our last tour in the States. Chamille got dislodged from its stand, fell over, and cracked. It’s been sent back. The break is along the grain, so I think it can be fixed.”

In 2005, the band celebrated its 35th anniversary at the Moonshine Theatre in Scranton, Pennsylvania.

“We spent the week at the theatre and worked on a lot of material for Clan Destiny, so it was really a two-fold situation, and it worked out really well,” said Powell. “We did an acoustic show and invited a fiddle player and an accordion player to join us onstage. There was an electric show the next night, and for my money the acoustic show, strangely enough, was the better of the two; there was an amazing atmosphere that night.”

Foremost in Powell’s mind in mid 2006, however, was the new release of Clan Destiny. The new songs sound as if they were written to work better with Powell’s singing voice, as he now handles all lead vocals.

“Obviously, I’m going to pick keys and styles that suit my voice,” he said. “But Muddy’s more of a bluesy guitar player than Ben, which also helps. I feel more comfortable with material that is a little bluesier. I enjoyed singing on the album, and I got some of the vocals in one take!”

Manninen’s aforementioned slide and lap steel capabilities are on prominent display on the new album, and Powell recalled that the Ash’s other original guitarist, Ted Turner, had also played those instruments. Unusual guitar tones on Clan Destiny include a harp-like passage (a la Andreas Vollenweider, not Paul Butterfield) on “Healing Ground,” which Powell noted was played using a Washburn acoustic with a capo high on the neck. “Loose Change” features an intriguing warbling twin-lead guitar riff. “It’s simply Muddy’s Les Paul and my ’52 Tele, played very cleanly… which is unusual for guitar players these days!”

Another clean guitar sound is heard on “Surfing a Slow Wave,” an instrumental that sounds like the Shadows playing a samba, and Powell agreed with a laugh that while such an analysis is valid, there’s an additional Shadows connection, noting “The guitar that was used on that one was actually a Korean-made Burns Hank Marvin reissue.”

Interesting time signatures can also be sussed out on the new effort, as exemplified by “Capture the Moment,” which Powell opined is reminiscent of “Pilgrimage,” the title track from the band’s second album, released in 1971.

Overall, Clan Destiny is a noteworthy effort from a veteran aggregation that isn’t caught in a time warp, and Wishbone Ash’s live shows are still sonic spectaculars for guitar lovers. Powell noted that tracks from the new album are going over very well in concert. And the definitive journeyman and dedicated musical craftsman, probably wouldn’t have it any other way.


This article originally appeared in VG‘s October 2006 issue. All copyrights are by the author and Vintage Guitar magazine. Unauthorized replication or use is strictly prohibited.
Wishbone Ash Live in London, Throw Down The Sword – 2003