This fascinating instrument from the shop of Manuel Ramírez ca. 1909 is unusual in that the complete history of the instrument is known to us, there having been only two previous owners.

According to family history, this guitar was ordered by the famous Catalan guitarist Miguel Llobet, who was a student of Francisco Tárrega (and teacher of Andrés Segovia), for a student named Elvira Mieres, of Buenos Aires. Elvira had become fascinated with the guitar and traveled to Europe to study with Llobet while he was in Paris. This instrument was Llobet’s wedding gift to her. Upon her death, the guitar passed to her son, who was not a guitarist, but who nonetheless preserved the instrument for the memories of his mother that it held. From him, it passed to the current owner.

The Manuel Ramirez catalog lists 48 models of guitars ranging in price from 10 to 1,000 pesetas, and while the original price of this instrument is not known, we can only speculate, as this guitar does not precisely conform to any of the listed models and specifications. It is made with a 632-millimeter scale and smaller body size – what is often referred to as a “ladies’ guitar.” In those days, the sizes of instruments was not written in stone, but it was expected that a musician would have an instrument made of the correct dimensions, which would facilitate their technique, rather than impede it. Smaller sizes did not necessarily imply a cheaper price, although the use of smaller sets of wood might have helped to keep costs lower, as in those days the ratio of materials costs to the final selling price was much higher than it is today, and suppliers generally charge less for sets of wood that are smaller.

Aside from the extensive mother of pearl inlay, several other features suggest that this was an expensive deluxe instrument. The sides and back are made of Brazilian rosewood, and in those days, any rosewood was a very expensive choice of materials used only on the most expensive instruments. The fingerboard is made of ebony – again, the most expensive choice of wood. The instrument was fitted from the beginning with machine heads, and although this original set by today’s standards would not be considered expensive, it was very expensive in those days, as these were imported into Spain at great cost from Germany, England, and America. The Ramírez catalog lists machines as an option for all the guitars, which are priced with wooden pegs as standard. 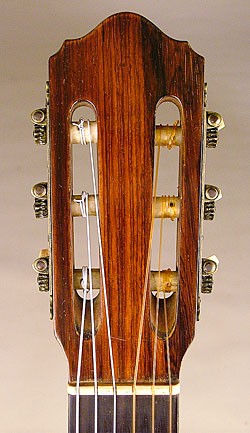 Front of the head. 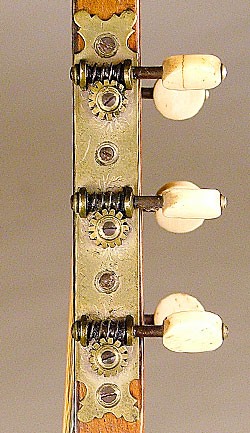 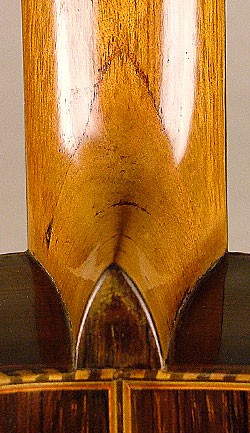 The sloppy, asymmetrical treatment of the heel-to-neck transition is more typical of Esteso’s work. 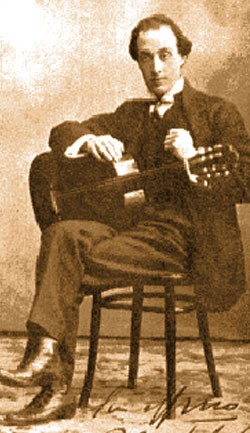 Miguel Llobet, who commissioned the guitar.

Internally, the top is fully barred with seven fan struts, and the soundboard itself is made of premium German spruce of medium grain, a very high-quality cut of wood. The instrument is also fully varnished, including the top. In the Ramírez catalog, the lesser-priced guitars do not include varnish on the soundboard. The internal linings are made of carefully formed individual Spanish cedar glue blocks for the top, and a beautiful kerfed lining for the back. Kerfed linings were the most expensive type in those days, as they were labor intensive, hence only the more expensive instruments were fitted with them. Cheaper guitars would be fitted with solid bent linings, often bent from green (or wet) wood to facilitate installation.

This instrument was probably made between 1905 and 1909, when the Ramírez shop was located at Arlaban 10. During this period, Antonio Emilio Pascual Viudes was working in the shop, along with Domingo Esteso, Santos Hernandez, and perhaps Modesto Borreguero, who would have been a teenager at that time. This guitar was primarily built by Santos Hernandez, several distinct features suggesting this; the accuracy of the head details and machine installation, the careful purfling work, the skill of the pearl inlay and setting (I’ve seen several other Manuel Ramírez guitars with similar pearl work, all done by Santos, who seems to have been the in-house pearl specialist), and the fact that the neck is made up of two longitudinal pieces of cedar. It seems that making fingerboards (or neck) of more than one piece is a Santos trademark. The interior kerfed linings are identical to those installed in the 1912 Ram&#237rez owned by Segovia now in the Metropolitan Museum of art in New York, as are the brace profiles and fan-strutting treatment.

Where the instrument shows the hand of Domingo Esteso is in the neck carving, especially around the neck-heel joint, where the neck was aggressively carved, leaving a slightly asymmetrical heel joint visible in the photo. The transition of the neck to the head is also more typical of Esteso’s work, being less crisp and somewhat asymmetrical. The bridge, while eccentric by today’s standards, also may have been made by Esteso, as it is not as delicate at the edges, nor as carefully formed as typical Santos bridges. But this is more difficult to determine, as Santos never used this style of bridge in his own instruments. 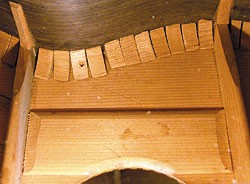 Interior view of the top, showing typical Santos treatment of the braces. Note the glue residue, typical of Santos’ work. 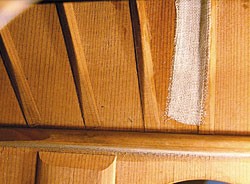 Interior of the top, showing the ends of the fan braces and typical glue residue indicative of Santos’ work. 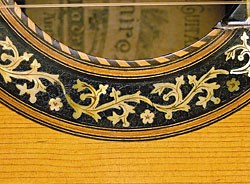 MOP in the rosette is set in “mastic,” an amalgam of glue and black sawdust. Top borders are inlaid using the same technique. The bridge, which has a fanciful shape popular at the turn of the century. Note that the inlay of the MOP is not very precise, uncharacteristic of Santos’ work. 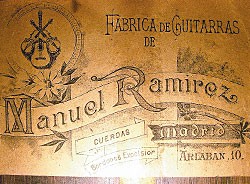 Interior label with the Arlaban 10 address, used by Manuel Ramírez until 1912, when he moved to Arlaban 11.

In 1976, the instrument was restored by Roque Guagliardi, of Buenos Aires, who repaired a top crack and, according to the repair label he inserted, refinished the guitar. However, the varnish and ground is totally consistent with original Manuel Ramírez instruments of the period, so at worst he only padded over the repaired areas very lightly, without removing any of the original varnish. Perhaps the owners ignorantly had asked for it to be refinished, but Guagliardi wisely did not, though perhaps they were charged for the work. Who knows? Clearly, the instrument retains its original ground and French polish, and consequently shows none of the distortion or other problems a heavily-thinned refinished instrument exhibits. The action setup is as it left the shop of Ramírez – still in perfect playing condition. It’s the intention of the current owner to make the instrument available to fine players for recordings, a wonderful and remarkably generous offer on the part of an enlightened owner who understands what these instruments intended use.


Richard Bruné began making guitars in 1966 and is a former professional flamenco guitarist. He has written for the Guild of American Luthiers and other organizations and lectured at guitar festivals and museums including the Metropolitan Museum of Art in New York City. He collects classical and flamenco guitars. He was recently featured on the PBS documentary, “Los Romeros: The Royal Family of the Guitar,” and his new book, The Guitar of Andrés Segovia: Hermann Hauser 1937, was recently published by Dynamic, of Italy. You can write to him at 800 Greenwood Street, Evanston, IL 60201, or visit rebrune.com.
This article originally appeared in VG‘s February 2008 issue. All copyrights are by the author and Vintage Guitar magazine. Unauthorized replication or use is strictly prohibited.