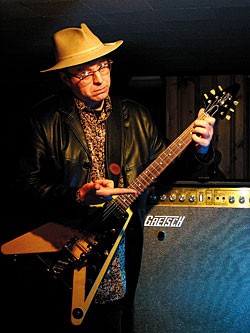 The V is a reissue, but the solidstate Gretsch Nashville amp is all original. Photo: Tom Comet.

In 1986, when singer/guitarist Webb Wilder and producer/songwriter R.S. “Bobby” Field pressed up 1,500 copies of It Came From Nashville, they could have just as easily called the debut It Came To Nashville – because it was as novel for a rootsy, hard-rockin’ band to invade Music City as to call it home. The album was immediately picked up by Landslide Records, who last year issued an expanded “full-grown” edition and announced that Wilder was recording his first new CD in eight years, with Field producing. On the resultant About Time, Webb puts his indelible stamp on rockabilly, R&B, western ballads, garage/Invasion rock, blues – as he says, “We sorta like to call it ‘progressive country.'”

In 2001 Wilder became one of XM Satellite Radio’s first deejays, and can still be heard on “Cross Country” (Channel 12). But as cool as his radio show is, the best way to experience Webb is onstage, with his band, the Nashvegans. Webb and the “Tone Chaperon,” guitarist George Bradfute, stopped to talk shop, en route to a town near you.

Vintage Guitar: When your first album came out, a roots rock band in Nashville was quite a novelty. Has the scene changed much since then?
Webb Wilder: Yes, it’s more diverse now. When we first hit the club scene, there were very few people playing roots rock with energy. The Scorchers were starting up. Energy for days! Tim Krekel and the Sluggers [with Nashvegan Tom Comet on bass] kicked ass, but that was about it. There was a big buzz about us, but it being Nashville, no one knew what to do with us. We never got a record deal out of here, really. The record companies were all out of New York, L. A., Austin, or Atlanta. Now you’ve got BR-549, the Legendary Shack Shakers and others. There was always a “different side of the street” here, but it’s more accepted and less novel now. I still don’t think there’s anybody here who really does what I do. There are a lot of people more talented, but they don’t do what I do.

Bradfute: When I moved to Nashville in ’84, I started seeing posters for Webb’s band around town. I went to see them play with some co-workers, and really dug them. I was working at Gruhn Guitars as a repairman at the time. I got to know them and eventually started working on their guitars.

Wilder: George is an incredible musician – a very sympathetic player, who listens more than he talks. He has great ears and can play lots of instruments. He plays tons of them including clarinet and cello on About Time. He’s like a renaissance man, in that he is musician, luthier, producer, songwriter, and engineer. He’s a good harmony singer, and very few people know he’s got a lot of funny characters that he can channel without warning in a moving van!

Who brings what influences to the group?
Wilder: I’m pretty aware of the sources of things I do and like, but sometimes they came to me through the next generation. Chuck Berry is a huge part of my guitar style, but it’s definitely largely by way of the Stones. I love Steve Cropper, but it comes out more like Faces-era Ron Wood with me playing it – and really neither! Dave Edmunds is a huge influence; my inside-out sounding take on his “monkey beat/racka-racka” is my modus operandi for almost everything, rhythmically. Hearing Johnny Cash and Mick Jagger at a young age gave me some clue how to sing, and you can’t underestimate the Beatles. I love the Everlys and Beatles, but I can’t sing like that. The influences are really too many to name and I always leave people out. Bobby [R.S. Field] and I were really into NRBQ, Rockpile, the Thunderbirds, the Rock & Roll Trio, Free, Badfinger, the Band, the Stones, the Who. It’s all in there somewhere – even Mott The Hoople, Bob Wills, Haggard, Hank, Waylon. 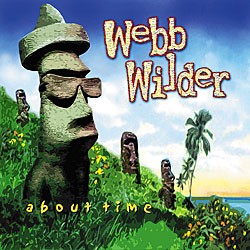 Bradfute: I grew up in Memphis, listening to all sorts of stuff. My grandmother, mom, and aunt taught my brother and me how to play ukuleles. Then we saw the Beatles on “Ed Sullivan,” and you can guess the rest. I listened to the obvious big guitar heroes – Hendrix, Clapton, Beck, B.B. King, John Lee Hooker, Billy Gibbons, Duane Allman, Leslie West, Steve Cropper. Lately I’ve gotten into Chet Atkins, Tony Mottola, and Al Caiola. Tone is such a variable commodity. You can plug a particular guitar and amp in, and have three different people play the same rig, and you’ll get three totally different sounds. As an engineer, I work every day with endless variables that affect tone. It’s a thin line between magic and mediocrity.

What’s your main setup onstage?
Wilder: I always have one or two Teles and usually a Gibson – often my mahogany Historic ’58 Flying V. I almost always run my 50-watt Hiwatt head through either a one- or two-12 cabinet. Currently, the only pedals I have are a first-generation Fulltone Fat Boost, a Marshall Vibra-Trem, and a tuner. Most of my guitar tracks were cut with the Fat Boost on. The Hiwatt sounds surprisingly clean in the studio. On the CD, I used my Custom Shop 335 with Voodoo pickups, my ’67 rosewood-board, Lake Placid Blue Tele, an ’89 Gretsch 6120 reissue, and a Les Paul Jr. refinished by Tom Murphy.

Bradfute: On the CD, I used a lot of different stuff – a Les Paul Custom through a Condor guitar synthesizer, a recent Danelectro 12 string, a Gold Tone 6-string banjo-guitar, a homemade four-pickup Strat – and brought out my old [Gibson] GA-40 Les Paul amp, which Webb also used some. Live, I usually use a couple of DeArmonds – the Starfire, an M-77, and sometimes a Jetstar for open tunings – and sometimes a Tele or a Les Paul. I usually go through a Dr. Z Route 66 and 1×12″ cabinet, sometimes a Dr.Z 65-watt 2×12″ combo, sometimes a Prescription head and cab. My pedal board has a Roland Wah, Nobels and Ibanez overdrives, Ibanez PDM-1 Modulation Delay (way cool – wish they still made them), Boss tremolo, and Boss tuner.

You have quite a collection of DeArmonds.
Bradfute: I love the DeArmonds! I also have a T-400, the big Duane Eddy model. I like them because they’re so stable. I’m always amazed at how well they are constructed. Very high quality workmanship – made at the Cort factory in Korea. They’re great budget guitars; the best bang for the buck out there.


This article originally appeared in VG‘s June 2005 issue. All copyrights are by the author and Vintage Guitar magazine. Unauthorized replication or use is strictly prohibited.
Webb wilder – Human Cannonball
Current Issue