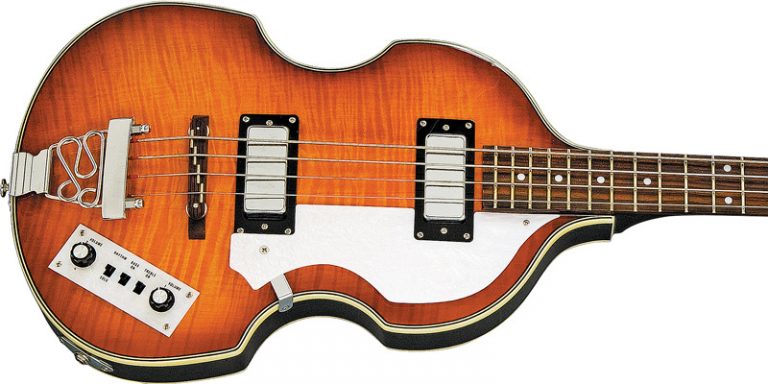 The Rogue VB-100 Series II is an homage to the venerable Höfner 500/1 semi-hollowbody. Popularly known as the “Beatle bass,” this axe was used by Paul McCartney on many early/mid-’60s recordings and tours by the Fab Four. But while vintage models and new Höfner reissues go for $2,000 to $3,000, this short-scale bass lists for only $399.

Rogue is essentially the “house brand” of Asian-made gear distributed by Musicians Friend. Series II means it’s built in China, while the original was made in Korea.

The VB-100 has a laminated and mildly arched maple top and back with semi-hollow construction inside and a pearloid pickguard (to make it look extra fab!). The bass’s body is extremely light and comfortable to wear. The slender neck has a short 31″ scale and 22 frets, while the headstock sports generic bass tuners that do their job well enough. Hardware includes a trapeze tailpiece and an adjustable wooden bridge with metal saddles. For electronics, you’ll find a pair of pickups, each with a Volume control, and an On/Off switch. There’s also a Rhythm/Solo switch that adds only very subtle tonal coloration.

That said, the VB-100 is actually a cool little bass for the money. For guitarists seeking a four-string, one selling point is that its short-scale neck makes it a breeze to play; while the bass looks Paul McCartney, it actually plays Jack Bruce – that is, guitarists and some bassists will definitely want to take a few heavy solos on this baby. Action is very low, fast, and remarkably buzz-free, contributing to its “lead bass” vibe.

Again, the VB-100 doesn’t provide a great variety of tones, but does have a full, round ’60s tone that should satisfy your band’s Brit Invasion or Motown medley. Flip on the overdrive for a bit of Cream-style bass, and the results are disappointing – these are definitely budget pickups and sound rather brittle with gain applied. But that shouldn’t stop one from trying, i.e. with a bit of overdrive in live situations. If recording, try a bass with better pickups.

Who will ultimately buy the Rogue VB-100? Perhaps guitarists, or bassists seeking a backup. Serious bassists will balk at its short scale and marginal tone controls, but its fun, sounds decent, looks great, and plays like a speed demon. And for the price, who’s gonna complain? – Pete Prown

The Cost of Protection