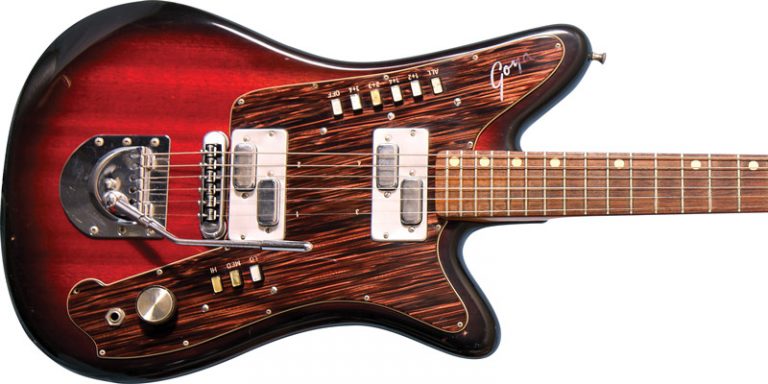 American guitars made in the 1950s and ’60s constitute an almost-holy canon, yet most players in that era took their first steps on imported instruments – often good and interesting in their own right, like the Goya Rangemaster.

In the ’50s, guitars were typically obtained one of two ways – ordered from catalogs published by Sears and Roebuck or Montgomery Ward, or bought from a local music store. There were no Guitar Centers, no vintage-guitar shows, no internet. Stores were supplied by distributors who bought instruments wholesale from manufacturers such as Harmony, Kay, Regal, Valco, United, then marked them up and delivered them to places like Durdell’s Music.

One prominent New York “jobber” was Jerome Hershman, whose Hershman Musical Instrument Corporation was exhibiting at NAMM shows by 1940, maybe earlier. On a buying trip in 1952, Hershman met the owners of Levin Guitars, one of the largest makers in Europe. In ’54, Hershman introduced Levin-made acoustic guitars under his own brand, Goya, as an alternative for players who couldn’t afford a Martin, Guild, or Gibson but wanted something better than a Kay and Harmony. In ’59, he expanded the Goya line with electric guitars made by Swedish accordion builder Hagström, beginning with the innovative plastic-covered hollowbody Deluxe and Standard models with modular pickup assemblies.

Later that year, Hershman established Goya Guitars, Inc. at 51 W. 23rd Street, which may have been a partnership with Hagström. From ’59 until ’63, Hagström built Goya electric guitars before a disagreement caused Hagström and Hershman to part ways. After the breakup, Goyas were again distributed by Hershman Musical Instrument Corp., which by then had moved in next door.

Hershman (the company) did not immediately replace the Hagström electrics. Instead, in ’65 he debuted the Goya Rangemaster solidbody electric built in Italy by ZeroSette. Guitarmaking in western Europe had taken off following World War II, with centers in Sweden, Finland, Holland, Germany, Sicily, and Italy. Many were founded as accordion makers, but after the brief accordion boom of the mid ’50s went bust, they began making acoustic guitars. By the early ’60s, some of the instruments were being brought to the U.S., including Eko models made by Oliviero Pigini, of Recanati, Italy, and Egmonds, from the Netherlands. As demand for electric guitars exploded after the Beatles, more turned to electrics, including ZeroSette, which was founded in 1945 as a subsidiary of the American accordion company Giulett. Exactly when they began producing guitars is uncertain, but they were at it by ’64.

Hershman’s 1965 sunburst Goya Rangemaster was made by ZeroSette with two split single-coil pickups. Its principal attraction is the “accordion” switching system, with six pushbuttons on the upper horn (engaging all, 3+4, 3+1, 2+4, 1+2, and kill/off). Three pushbuttons below the bridge/pickup selected Lo, Mid, or High tone capacitors, and were situated near the master Volume knob. The tonal palette isn’t remarkable by modern standards, but there is a novel criss-crossed bass/treble string pairings offered by the split pickups. While the package looks a little silly, it’s actually a high-quality build.

In ’66, Hershman/Goya was purchased by Avnet, an investment conglomerate that also acquired Guild Guitars and became the Goya Music Corporation (Guild was kept separate – it did not become part of Goya). This coincided with the debut of thinline Rangemaster semi-hollowbodies with similar electronics and including a 12-string along with several stop-tail versions. Color options expanded to Fire Engine Red, Jet Black, and Caribbean Blue.

The Rangemasters were later joined by the Panther II solidbody and hollowbody basses with more-conventional pickups, plus some single-pickup hollowbodies. Not cataloged (and probably made only in late ’66) was the Panther S-2 with two single-coils and pushbuttons for off, neck, bridge, and both.

By ’68, the Goya catalog retained only the Rangemaster thinlines, including upscale versions. No production numbers are available, but the sunburst versions lasted (at best) from ’65 to ’67, opaques only one year. The thinlines were around from ’66 to ’68. It’s unknown if serial numbers are consecutive, but a few that have been seen (1316, 2451, and 3259) could be in sequence, based on features.

Hershman had been offering the Greco line of Japanese-made acoustic guitars since ’65, and when Avnet took over, Goya Music added Japanese solidbody and hollowbody electrics with headstocks clearly emulating the ZeroSette shape.

By 1970, Goya’s distribution was probably just leftover stock that was then sold to amp builder Kustom Electronics, in Chanute, Kansas. When that company folded in ’72, its assets were transferred to Dude, Inc., also of Chanute. Whether any Goya guitars were sold during this period is unknown. In ’76, the brand was bought by the C.F. Martin Organisation, which had purchased the Levin guitar company in ’72/’73. Production of Goya acoustic guitars was returned to Levin – the place where it had begun two decades earlier – and lasted until the factory closed in ’79. A few Goyas were also built that year by Landola, in Finland, before production was moved to Japan, where it became focused on beginner instruments and remained in existence until ’96; in the final years, some were made in Korea. 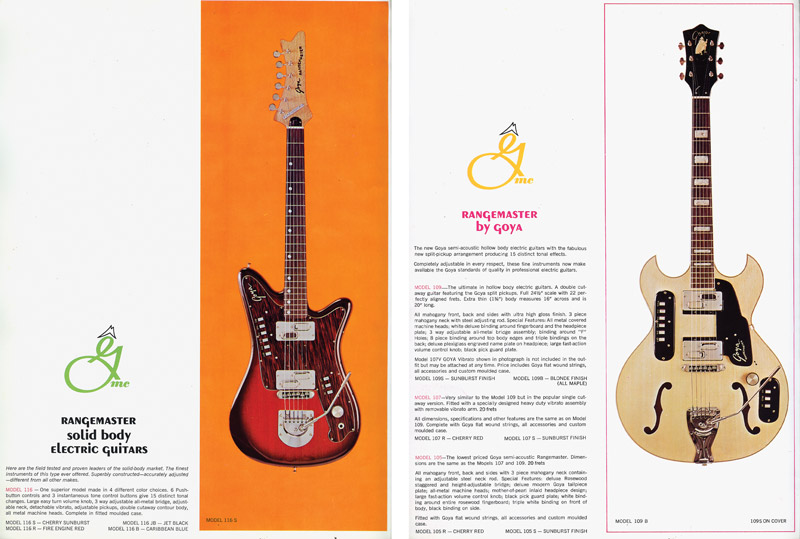