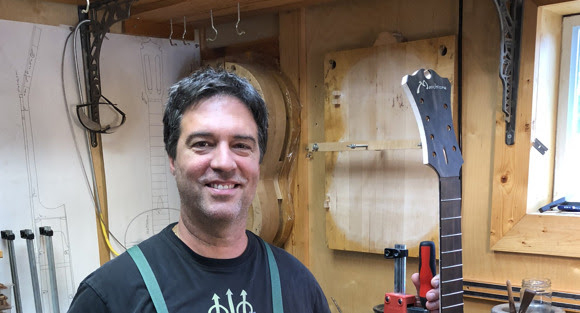 Together, Marchione guitars and SonoTone premium strings enhance these aspects of each guitar, and aid the luthier in creating the highest-quality instruments he can make — from the wood, to the glue, to the pickups and, now, the strings — plus everything in between.

“The moment I first played a Marchione guitar it was like a whole new experience for my ear,” Pandey said. “And, especially with SonoTone strings, I can hear a much wider tonal spectrum. It’s mind-boggling! That all has to do with the quality of the materials, and the way each guitar is made.”

“If you want to do it right, you can’t cut corners,” Marchione said. “You have to take extra steps — like learning how to properly plane your joints — and you have to learn to do these things by hand.”

A luthier years in the making
While living with his family in Bergamo, Italy, near the city of Cremona, in the 1970s, Marchione — like Pandey — became crazy about guitars starting when he was kid, and began learning to play music while listening to bands like The Beatles and Led Zeppelin.

“We had a small-bodied classical guitar from a local luthier who stringed instruments there, and that was the first guitar I played,” Marchione said. “That was also the first time I took an interest in instrument making, seeing the guys in the workshop who were making guitars — the way I now do — and they were doing it as their profession.”

As the years went on, Marchione began studying music more seriously, practicing upwards of six hours per day while he pursued a passion for jazz music in high school. After getting a BA in Music from Naropa University, he moved to New York City and began his career as a luthier in 1990, first as an apprentice to legendary luthier like John Suhr, who was then making Pensa-Suhr guitars for Rudy’s Music.

“John was always really into getting the fretboard right, as well as the fret-height, and getting everything properly intonated,” Marchione said. “Learning that right from the beginning was super useful.”
SonoTone helps “tighten up” intonation
“One of the things I love about SonoTone strings — on top of the tone and feel — is the accuracy and the consistency I can get while setting up the intonation and fretboard,” he said. “I’m able to dial the setup in just a little bit tighter than I was before. I’m able to get my guitar necks a tiny bit straighter and the nut a tiny bit lower, so I can get the action to be a tiny bit lower. Combine all those elements together, and you get an intonation that is sublime.

“It’s really vocal-sounding in the sense that it is in-tune and pleasing to the ear,” he added. “It takes more time to do that, but the end-result is a better guitar.”

In addition to helping Marchione achieve his signature feel and intonation, SonoTone Symphonic series strings enhance the tonal clarity of his steel-string acoustic guitars, like Marchione’s OM model. Meanwhile, SonoTone Vintage series strings provide more balanced tone on his electric guitars when he tests them out across a variety of amplifier models. “I’ve also been using the SonoTone SonoCore nickel-wound 12-54 sets, and that’s a fantastic string on my archtop guitars. The sound is unparalleled.

“Overall, though, the consistency and accuracy I get from using SonoTone strings is a really big deal,” he said. “Once I set up a guitar, I’ll usually let them sit for a few weeks before I ship them. And, with SonoTone strings, they intonate exactly the same when I check them again. There’s no problem with shifting. So, once the intonation has been set, you’re good to go.”

Parallel manufacturing philosophies
Much like Pandey’s decisions to use only the highest quality materials and to manufacture products domestically, by hand, Marchione uses only top-quality woods, glues and fittings, as well as age-old techniques, to craft each of his instruments.

“We take the raw lumber, age it properly, and cut them in the shop. We dry the wood here. Everything in our three-story building is very tightly climate controlled, even for the electric guitars.

”Every instrument is built using hot hide glue, and the joints are planed by hand to ensure they’re truly perfect. We take additional steps during production that most people don’t even know about, but it’s similar to the way a great violin or cello luthier would make instruments.
“This not only gives the instruments greater stability — because, with hot hide glue, you don’t get any of the movement you can get from using carpenter’s glue — but, because you’ve got all wood touching, from the joints, to the top, to the back, to the neck and fingerboard, you get better sound transmission, because the wood is touching everywhere and doesn’t have sheets of vinyl glue in between.”

Pandey said, after playing Marchione guitars, “Now, when I go back to a standard, double-cutaway, S-style guitar, I hear a much narrower tonal range than I get from the guitars that Stephen makes. It’s like a blanket has been lifted off of a Stratocaster. It’s much easier to work with, EQ-wise, in the studio. That’s why I keep calling it the Strat-o-varius. It has the full tonal spectrum, like what I hear from an amazing violin.”