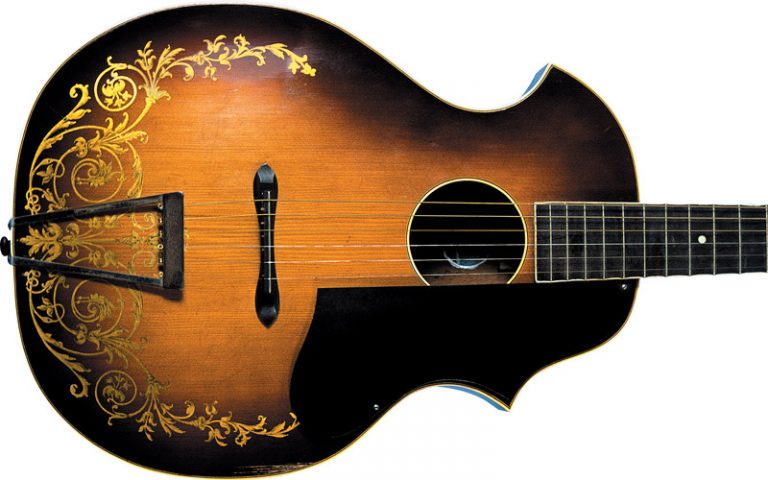 Almost any guitar can be viewed in terms of a confluence of influences that produced it, from the company history to the history of guitar evolution to the kind of music it was meant to play. But it’s rare that you get one so fully loaded as this circa 1933 KayKraft Style A that’s just brimming with those confluences plus a Sicilian connection, union busting, and even a World’s Fair! All in this guitar!

Let’s begin with the company. The KayKraft name appeared at a momentous time, just as the Kay brand was emerging as a powerhouse. KayKraft guitars were built by the Stromberg-Voisinet Company (pronounced to rhyme with “bet”) of Chicago. S-V was founded in 1892 as the Groehsl Company, just as the Chicago musical instrument manufacturing scene was exploding. This was partially due to the proximity of plentiful natural resources – the forests of the upper Midwest – partially to the availability of skilled labor, and partially due to its geography and numerous railroad lines. Another factor was the success of catalog retailers such as Montgomery Ward and Sears, both of whom drew upon local manufacturers to supply the growing nation’s demand for guitars.

In 1921, Groehsl was taken over by C.G. Stromberg (no relation to the Boston guitarmaker) and presumably someone named Voisinet. In ’23, the company was joined by Henry Kay Kurhmeyer, who was secretary of S-V by 1925. In ’27, S-V introduced a new line of guitars called KayKraft, including a set-neck Venetian guitar. The established wisdom is that the line was named after secretary Kuhrmeyer’s middle name, though S-V was already importing German violins and cellos made by the Kreuzinger factory, which could also have been a factor.

By 1931, Kurhmeyer was president of S-V. KayKraft guitars were increasingly promoted. S-V guitars disappeared by ’32. The company continued to be known as S-V, but by ’34 had made the full transition to the Kay Musical Instrument Company, on the back of KayKraft guitars. The guitar shown here reflects that changeover.

The first thing you notice is that the KayKraft guitar is basically shaped like a Venetian mandolin, a design that dates back at least to 19th-century Italy. No coincidence, since the Venetian shape appeared right after the luthier Joseph (Giuseppe) Zorzi – a descendent of the famous Sicilian Panormo family – moved from Lyon & Healy (L&H) to S-V.

In 1924, general disgruntlement about wages led to the formation of the American Guild of Luthiers, though it was more of a drinking club than an activist organization. In ’26, Zorzi posted notice of a Guild meeting at L&H and was fired. He immediately took over managing production at S-V. The Venetian shape appeared the next year, though there has been speculation that it owes more to Philip Gilbert, another luthier who followed Zorzi.

Whoever we thank for the shape, Zorzi kept experimenting with the form. The first KayKrafts were set-neck flat-tops. But interest was growing in a new form, the archtop. Beginning about the time of World War I, America began to become increasingly interested in jazz and the jazz band. While this kind of music was dominated by wind instruments, the rhythm section was often built around the cutting power of the tenor banjo.

Tracing that fascinating story is more than we can do here, but the tenor emerged from the banjo orchestra work of James Reese Europe, music director for the first American professional dance team of Vernon and Irene Castle, who returned from Europe in 1914 and introduced America to the Argentinean dance rage, the tango. Europe featured lots of banjos because he liked African-American instruments. One of these was a short-necked version of the four-string plectrum banjo tuned like a mandolin and known as the tango banjo. This became the tenor banjo that powered the dance bands of the 1920s Jazz Age.

Circa 1924, Gibson’s genius Lloyd Loar developed the Gibson L-4, the first modern archtop guitar. It didn’t take long for guitarists, bandleaders, and manufacturers to appreciate the power of this new design, often touted as “violin construction.” Many early archtops were tenor guitars, emulating the tuning of the tenor banjo and thus facilitating conversion. By the late 1920s, jazz bands were switching from banjos to guitars. The arrival of electricity would, of course, hasten that change, but that’s also another story.

So, we return to the KayKraft Style A. In 1929, Joseph Zorzi took the original flat-top Venetians and made significant improvements. First, in tune with the times, he arched the top and back. Unlike the carved creations of Loar/Gibson, this was “stressed,” a.k.a. bent. This idea was not new to Chicago luthiers; the Larson Brothers had used this method early in the 20th century, bending a solid piece of wood over curved braces to produce additional stress presumably for increased projection. To be honest, you ain’t gonna power a jazz orchestra with a KayKraft, but the idea wasn’t bad.

Perhaps more interesting was the construction of the neck-body joint; Zorzi came up with a bolt-neck design with a threaded bolt sticking out from the neck heel into the body cavity, where it was secured with a wing nut. The heel was given a convex profile. Then, between the heel and the upper bout Zorzi inserted a piece of wood with a concave profile. Loosen the strings a bit, loosen the wing-nut, and slide the neck along the shim and the angle changes, helping adjust the action. A brilliant idea (and one that probably could have used two bolts for better stability)!

KayKrafts came with spruce tops and ribbon mahogany (Style A), flamed maple (Style B), and rosewood (Style C) bodies. They were produced until 1934. Would you take one over a contemporary Martin, Gibson, or Larson? No. But they have a nice, funky sound typical of the era.

Most KayKrafts shown in catalogs are plain. The one seen here has a gold “decalomania” belly decoration. While this can’t be confirmed, we suspect these were special models made in celebration of the 1933 Chicago World’s Fair, much like Gibson’s fancy Century of Progress flat-tops.

Production numbers are unknown, but they show up fairly frequently in snapshots from the era, so they’re probably not rare birds, or rather, weren’t in the ’30s. And today, no one is reproducing these cool relics from the Great Depression.