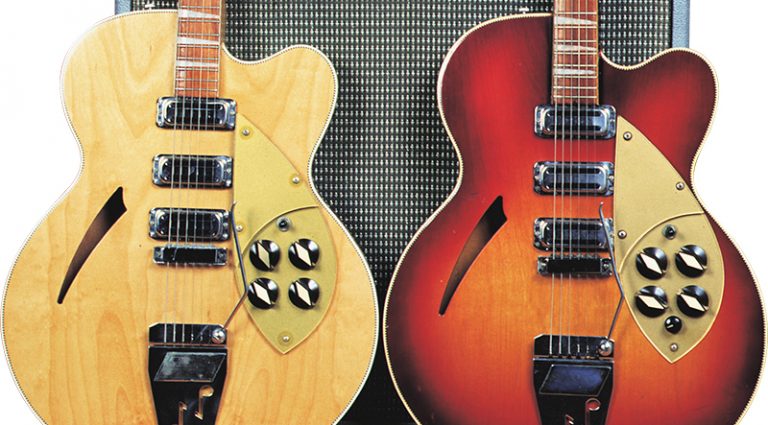 Every guitar company has had its odd ducks, its failures, its forgotten models. While some are consigned to the scrapheap of history for good reason, there are always instruments that just plain never caught on. Often, this is due more to an accident of history than any fault in the actual instrument. 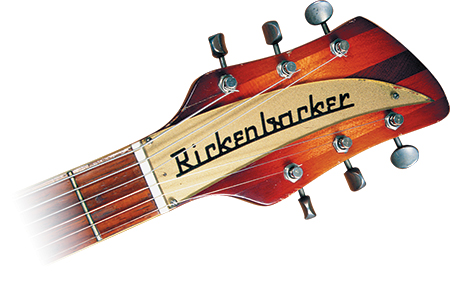 The late-’50s Rickenbacker Capri thin hollowbody guitars were bold, classic, and original designs that still form the basis of the company’s product line. But their full-bodied F series cousins were produced in extremely small numbers from 1959-’62, and quickly faded away.

All vintage Ricks are rare compared to comparable Fenders or Gibsons, but the 375F guitars are among the least common of all – so scarce, in fact, that even many dedicated Rick fanciers have never seen one! Published productions figures list only seven made and sold! Then again, even most fanatic Rickhounds are not looking for one, particularly.

Despite being a top-line guitar at the dawn of the greatest era for Rick collectibles, the 375F is neither the most soughtafter or costly Rickenbacker. Why? Well, the most desirable Ricks today are those that carry the whiff of Beatles about them: the double-bound 360/12 0S, as used by George Harrison, the export model 4001S bass used by all English Rick players, and the short scale “John Lennon” model 325. Original ’60s examples of these are also very hard to find, and there have been a lot of people looking the past 30 years! 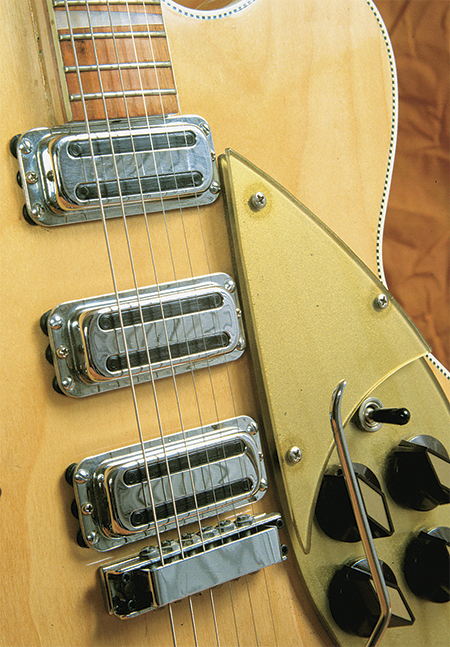 The entire 330-375F series was pretty much history prior to the British invasion hoopla that put Rickenbacker on the map worldwide, and unlike the Les Paul, no legendary rock guitar god pulled one out of the closet for a bout of reclaimed glory. In sound and quality, these are the equal of any Rickenbacker, but that sweeping double-cutaway Capri body is the Rick trademark to most people, and without it, these guitars somehow don’t quite look right. Despite being very attractive, they missed achieving the iconic status of many other Rickenbackers.

It’s easy to imagine these conceived as a fail-safe model, made to appeal to the more conservative player of the late ’50s. The 310-375 sweeping double-cutaway body was a radical design for the time, however familiar it looks today. In the native southern California music scene, Fenders had become the hot item, with Gibson as the perennial alternative. Ousted ex-Fender partner F.C. Hall purchased the moribund Rickenbacker operation and may well have seen his company as able to fill a niche between these two makers, with guitars not as radical as Fender’s solidbodies, but flashier and more modernistic than the average Gibson.

After marketing the Combo series (a radical, if not particularly practical, line of solidbodies), Rickenbacker readied prototypes of a thin hollowbody guitar in 1957-’58. Expatriate German luthier Roger Rossmeisl’s designs for a series of hollow cutaway guitars owe very little to any American concepts of the era, but have roots in the post-war archtops of his native land – particularly features like the slim, non-tapered necks and slash-shaped F-holes. The necks and headstocks are specifically similar to some Hoyer guitars of the ’50s, which can feel eerily familiar to anyone accustomed to playing an old Rickenbacker. These guitars had the unusual construction feature of having the top and sides carved from one piece of wood, hollowed out and capped with a flat back. This results in an instrument almost as easy to build as a solidbody, having no bending of the sides or kerfing required, but with some of the sound of a hollow guitar. The F series probably were meant to fill out the line with a guitar that, while wholly Rickenbacker in concept, might appeal to the less adventurous electric archtop user. 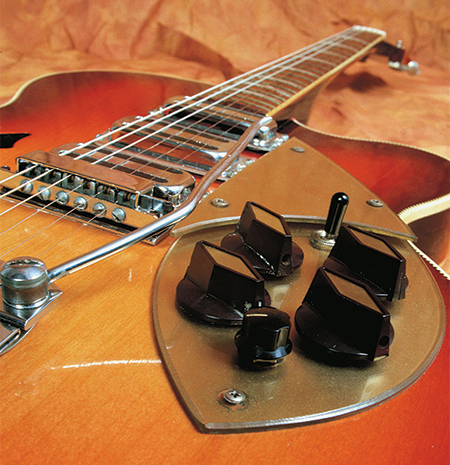 With the occasional celebrity placement (Jimmy Bryant and James Burton both field tested the new Ricks, but weren’t weaned off those familiar Telecasters) the Capris were a modest success in the late ’50s, but the full bodies didn’t exactly lead the pack. Probably any guitarist who was excited by the well-advertised slim sparkletrim neck was well past being tied to the “old fashioned” single-cutaway body anyway – the more dynamic look of the flashier double-cut body was an instant trademark for Rickenbacker. After Lennon’s use of the model 325 made the shape known worldwide, it said “Rickenbacker” to most guitarists.

The 375Fs sport the ne plus ultra of Rickenbacker features: three pickups, deluxe trim, and a special long-plate Accent vibrato (with a nifty cutout musical note motif) that is the only unique appointment (besides the large, rather pancake-like body). The standard gold lucite pickguard with gold-topped “oven-style” knobs looks a bit out of place hovering in the middle of the much larger top, but still fits with the cosmetics of the instrument. The checkerboard binding and crushed pearl fingerboard inlays are standard to all “deluxe” Rickenbackers – those with model numbers 360 and above. The models 330-345 have dot inlays, no binding, and were somewhat less expensive, although none of these guitars came particularly cheap when new.

Model numbers run in an ascending series starting with model 330 (two pickups, no vibrato), the 335 (add vibrato tailpiece), and so on up to the fully equipped 375. The 310 to 325 were ¾-size bodies and never were offered in the higher grade of ornamentation. The F-style body was available for the entire 330-375 series. All full-body models are rare, but none more so than this most deluxe version.

It’s hard to imagine these guitars being successfully marketed as jazz instruments, despite the more conservative styling – they were probably aimed at the same Southern California cowboy guitarists who were already Rickenbacker’s (and Fender’s) primary market. The only well-known jazz guitarist to ever make much use of a Rick was Toots Thielman, and he used an early solidbody Combo! Even today, to the uninitiated player, Ricks tend to feel a bit strange, with the heavily lacquered fingerboard on the slim neck being the most unfamiliar feature. The F series are noticeably heavier than the standard models, as well, and with the totally flat top on the thin, wide body, do not handle quite like any other guitar. The standard Capri-style body has a certain logic to the layout, and if the player is willing to meet the guitar halfway, is quite comfortable to play – the F-style full body takes a lot more getting used to – hardly anyone seems to have made the effort!

The sound of these guitars is pretty much the same as the smaller Capris – the fuller body adds a bit of depth, but overall they still ring with familiar Rickenbacker chime. To someone used to the warm purr of an archtop Gibson, they may sound downright clangorous! They have the same sort of crisp sound as early Fenders, apparently what was de rigeur on the West Coast at that time. Like most three-pickup Gibsons, the wiring on three-pickup Ricks is eccentric and does not exploit many of the possible combinations – but they sure look sharp! Shouldn’t all Rickenbackers have three pickups?

From the point of view of a collector trying to assemble a set of vintage Rickenbackers, the 375F is a particularly rare and desirable guitar. To anyone else it’s simply an interesting historical footnote. In the late ’60s, the company made another attempt to market this body shape as a 12-string. These guitars are somewhat less attractive, with a less-defined cutaway and an array of knobs on the lower bout. They were even less successful.

It’s doubtful many tears were shed at the rapid decline and disappearance of this model – within a few years Rickenbacker was caught up in an unprecedented demand for its instruments. Those that evolved from the late-’50s double-cutaway Capris – the 330-360 six and 12-strings – led the way. While the F series guitars proved a blind alley in Rickenbacker’s development, these 375Fs sure look sharp today. Is it time for one of Rickenbacker’s notoriously faithful limited-edition reissues?

This article originally appeared in VG June 1998 issue. All copyrights are by the author and Vintage Guitar magazine. Unauthorized replication or use is strictly prohibited.