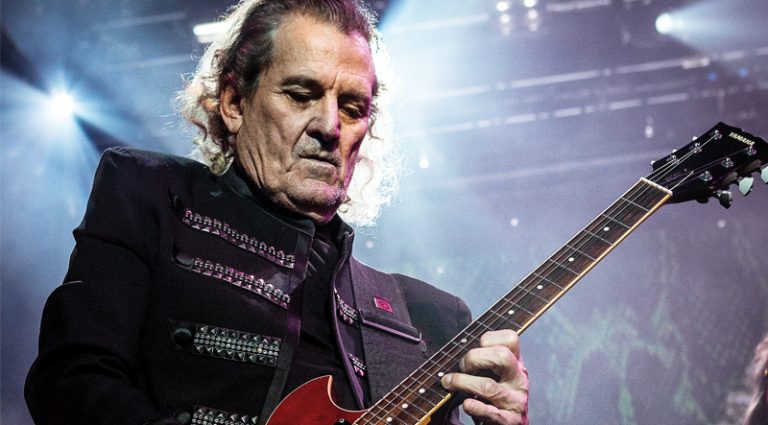 Before there was an Alice Cooper, man and solo artist, there was the band called Alice Cooper. From 1969 to ’74, it cranked out seven influential albums with the dual-guitar attack of Michael Bruce and the late Glen Buxton. Bruce contributed many of the band’s anthemic smashes, such as “I’m Eighteen,” “Be My Lover,” and “Muscle of Love.” The group reunited last year for a U.K. tour, and we sat with Bruce to discuss how it all happened, and how it went.

How did the Alice Cooper reunion happen?

Neal Smith, Dennis Dunaway, and I played at Summer NAMM, in Nashville, and I don’t know if it was coincidence or conspiracy, but Alice was there, too, and we ended up playing together. The crowd loved it, so Shep (Gordon, the band’s longtime manager) said, “Let’s do some U.K. gigs and see how it goes.”

We started in Leeds, then did Birmingham, Manchester, Glasgow, and Wembley. After Wembley, Alice said the reviews were better than if we had written them ourselves, so he started thinking about U.S. dates.

For the U.K. shows, you relied on current Cooper guitarist Ryan Roxie for amplification.

Ryan has become the Glen Buxton figure, and he’s doing a great job. I use his spare Marshall on the other side of the stage. It’s great because it’s two Marshalls and everything is behind the set.

Talk about how the classic lineup contributed on Cooper’s last two studio albums.

It started with Alice’s Welcome to My Nightmare sequel in 2011. [Producer] Bob Ezrin called me and said,“We want to do one of your songs.” Neal and Dennis were there and we did one of Dennis’ songs, one of Neal’s, and one of mine. That got the ball rolling. Then just before Alice’s Paranormal album, Neal came out and the three of us started jamming – and visiting Alice. We went over and did three or four songs in the studio.

Yeah, Terry Dennis, who works with Bigsby and Vibramate, is shopping the idea for an Alice Cooper “guitars of the stars” thing. I had an SG with 24 frets, a Bigsby, P-90s, and a master Volume. I covered the whole thing with mylar, which was kind of interesting. We’re going to work toward that. Glen’s was the three-pickup SG Custom.

Which guitars are you currently using?

I met this guy in Toronto, and he asked if I’d be interested in being endorsed with his company, Hunter Guitars. He had one model, and it was like an SG but fatter, like a middle-aged SG (laughs) with 24 frets and a whammy bar, which I replaced with a real Bigsby. It looks a lot like the one we’re working on with Terry Dennis. I’ve also got a Yamaha SBG-500 on which I added a roller bridge and a locking nut. There are two things I need from a guitar – for it not to feedback, and not to break strings a lot.

When not working with the Alice Cooper Group, you do a side project with your wife, Lynn, on bass.

Yeah, we call it Michael Bruce and the Texas Chainsaw Ballet. We’re digging out some gems from my catalog and trying to do some of the Cooper songs that Alice doesn’t do so much.

Which amps are you using for that band?

I have a Fender Deluxe reissue with a tube preamp and 12″ Eminence speaker. I also have a Fender Ultimate Chorus, which is solidstate, but I love the stereo sound, so I split my line out with one on each side of the stage and get a really nice sort of tube vibe, and a wash when I want it. I’ve been able to blend the two and it really has a lot of body and overtones. I replaced the stock speakers in the Ultimate Chorus with Celestions, and it made the world of difference. It still has that solidstate sound, but with the real stereo effect blended with the Deluxe, it’s a real nice thing.

You and the Alice Cooper group had a huge impact on rock music and guitar in the ’70s. What goes through your mind when you think about that?

I told Alice how I just wanted to thank him for what we did. I’m 70, and to be able to play this late… my mind is still wrapping itself around the fact that I just played with the Alice Cooper group. When you’re 20 and you’re out there as a rock band, your mind doesn’t go there, because of course you’re forever young.