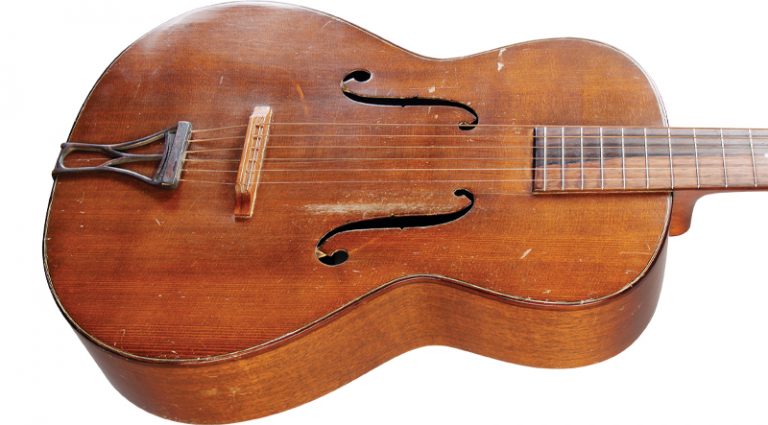 From 1864 through the 1940s, H.A. Weymann and Son, Inc. made, imported, and sold marching band, orchestral, percussion, and other instruments through its own mail-order catalog.

Heinrich “Henry” Arnold Weymann (1829-’92) arrived in Philadelphia from Germany in 1852. Twelve years later, he started a business selling clocks, jewelry, and other small goods. He soon began to stock accordions, harmonicas, sheet music, and violin strings; as with most immigrant shop owners, most of his stock came from his home country.

The earliest evidence of Weymann’s in-house instrument manufacture dates to the early 1890s, after control of the company was turned over to Henry’s son, Harry W. (1870-1930). Their Keystone State brand can be traced to at least 1894, and while some of their fretted instruments were built in-house, others were produced by Stewart, Regal, and Vega. Weymann’s greatest commercial success came via banjo sales, but its Jimmie Rodgers Special guitar proved fairly popular.

Beginning circa 1900, Weymann guitars were given serial numbers, and those produced after 1910 have their model name/number and serial number die-stamped on the end of the peghead. They’re generally very lightweight, with a sharper peghead angle than most guitars of the period, and produce a unique tone.

The 848 featured here is rare. Made in 1928, it has an Auditorium-size (141/2″) flat-top body meant to be played Spanish-style, and in many ways resembles Weymann’s smaller 648 and 748 concert models, both of which were Hawaiian-style guitars with spruce tops, f-shaped sound holes, ladder bracing, and mahogany back and sides. And while most Spanish-style Weymanns had rectangular pin-type bridges, the 648, 748, and 848 were given a fixed Brazilian-rosewood bridge with a straight saddle made from fine fret wire; strings pass through holes at the rear and terminate in a trapeze-style tailpiece that rests directly on the top.

This 848 has a mahogany neck, ebony nut, and 18-fret fingerboard (253/4″ scale) with 12 frets clear of the body. Weymann guitars typically had slotted pegheads and three-on-a-strip side-mount tuners, but the solid peghead here has a shape similar to that used on Weymann banjos, with six “four-to-one” banjo tuners dressed in grained-ivoroid buttons. The catalog describes their virtues including “centered gears and countersunk mounting, giving neater construction, and a far more attractive appearance.” The gold-colored Weymann logo decal and die-stamped serial number and model number appear on the rear.

The 848 was particularly well-adapted for blues-playing, with impressive sustain and natural reverb.

Weymann’s brand-name instruments saw their greatest success in the ’20s, but the onset of the Great Depression in ’29 and death of Harry Weymann in ’30 marked the beginning of a slow decline. In-house manufacturing was shut down almost immediately after Harry’s passing, and instruments were then subcontracted, their quality much lower. While the Philadelphia store continued business into the early ’60s, the company’s position as an instrument manufacturer essentially ended with the onset of World War II.