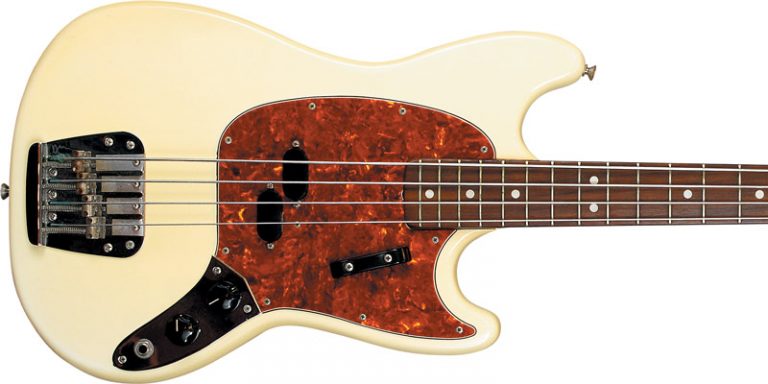 Despite its short scale, the Mustang has a potent sound, and as a result it was used by many notable players.

Fender’s short-scale Mustang Bass, introduced in 1966, was a transitional instrument in many ways.

In 1951, Fender set the pace in the solidbody electric bass market by introducing the first successful instrument of the type – the standard-setting Precision Bass, which has been through several refinements though its basic design has remained intact.

Not content to rest on its early laurels, the company developed its second electric bass, the significantly different Jazz Bass, in 1960. The next year, it introduced the innovative Bass VI, a true six-string bass guitar tuned an octave low. The short-lived Bass V, which had a high C string and only 15 frets on its neck, came along in ’65.

Fender started developing instruments for the student market as early as the mid 1950s, when its no-frills single-pickup Musicmaster and two-pickup 3/4-size Duo-Sonic models were introduced, both with 221/2″ scales until ’65, when they adopted a 24″ scale (and a “II” designation in their name). An upgrade student model, the two-pickup/24″-scale Mustang came along in ’64 sporting an offset waist and vibrato tailpiece. Following the Mustang’s lead, the Musicmaster and Duo-Sonic were given an offset-waist silhouette around the same time.

While the earlier Bass VI had a 30″ scale, Fender didn’t market a short-scale four-string bass until after the company had been sold to CBS in ’65. Prior to the sale, Leo Fender had been developing such a bass, as well as a 12-string electric guitar. The Electric XII didn’t make much of a dent in its niche, but the Mustang Bass quickly became popular among students, female players, and those with small hands.

Indeed, comfort was the intent behind the Mustang Bass, and its 30″ scale, light weight, offset waist, and body contours teamed up to make it easy to play, whether sitting or standing. Its headstock has a classic Fender four-on-a-side silhouette, its tuning keys have a rounded/egg-shaped profile (later supplemented by Schaller cloverleaf-shaped keys), and its bolt-on neck is made of maple with a 19-fret rosewood fretboard with pearloid dot markers. The truss rod can be adjusted at the body end, though doing so requires removing the neck from the body.

Another indication that the Mustang Bass was a student/budget instrument is its body silhouette. With its stubby cutaway horns and shallower cutaways, it looked more like its six-string student cousins than a downsized Precision or Jazz Bass.

Like the Precision Bass, the Mustang had a single split-coil pickup. But where the Precision’s pickup housings were rectangular, the Mustang’s were oval-shaped. The configuration of the Volume and Tone controls gave a nod to the Jazz Bass, being on a chrome plate instead of the pickguard. Its strings loaded through the rear of the body, and the large bridge plate had individual (and intonatable) string saddles, as well as foam mutes. A fingerrest was initially found on the treble side of the pickguard, but often, players removed it or relocated it to the bass side to serve as a thumbrest.

Initially, the Mustang Bass body was made of alder, but other woods were later used, particularly on natural-finished examples. The model was first offered in colors listed simply as Red, White, or Blue; Red and Blue had white pearloid pickguards, while White had a reddish tortoiseshell scratchplate.

Beginning in 1969, Mustangs were offered in “Competition” versions with new colors and a contrasting racing stripe across the corner of the lower bass bout. By 1970, Fender’s color chart lists the usual custom options, as well as those given to the Competition Mustangs – Competition Red, Competition Burgundy, and Competition Orange. Curiously, what Fender calls Competition Burgundy actually looks much more like the Lake Placid Blue shown on that chart.

Later years saw the Mustang Bass built with poplar or ash bodies dressed in sunburst, natural, walnut, black, and Wine Red finishes. Most of these were given black pickguards, though sunburst versions and some white examples had white. In the late ’70s you could even get a Mustang finished in Antigua. The model was discontinued in 1981 and recently reintroduced as an import.

Despite its short scale, the Mustang has a potent sound, and has been used by many notable players. Rolling Stones bassist Bill Wyman used one during the band’s 1969 tour, as documented by the movie Gimme Shelter. The Talking Heads’ Tina Weymouth used one. British purveyors included Trevor Bolder of David Bowie’s Spiders from Mars, Alan Lancaster of Status Quo, and Denny Laine with Paul McCartney & Wings.

The Mustang was part of the learning experience for many aspiring bassists who came of age in the 1960s and ’70s. A Fender/CBS product, it was in fact a Leo Fender design and has a unique place not only in Fender’s lineup, but in the company’s overall history.

Special thanks to Walter Carter and Richard Smith.

The Birth of Newman Guitars