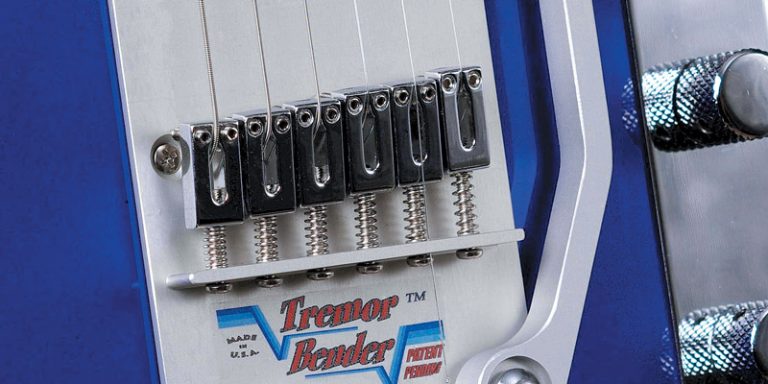 Thompson’s goal was to make a stringbender that could be installed without drilling holes or doing irreversible modification. He also wanted to utilize an actuator that didn’t get in the way of the guitar’s playability. And because stringbending systems typically are priced in the $300 to $600 range, Thompson thought he could offer a more economical alternative. Wishlist in hand, he was soon in his machine shop, putting to use his divergent skills.

The end result, which he calls the Tremor Bender, is a lightweight machined aluminum plate that bolts to an instrument. A fairly simple device, it ships with a bender plate that is retrofitted with a guitar’s existing bridge saddles and mounting screws. For our test, it was mounted to a stock Fender Telecaster.

The Tremor Bender can be used on the B or G string (we chose the B) and its only adjustment is a stop screw that is set to allow different degrees of pitch bending, from a semi-tone to two whole steps! Tension of the bender’s actuation is accomplished with different string gauges – if you want a stiffer feel, use a .013 B string. Lighter? Use an .011, or even a .010 if you want the arm to be super “pinky friendly.”

Because no wood is removed, the Tremor Bender does not negatively affect the tone of the guitar. On the contrary, its large plate gave our test instrument a more open and acoustic-sounding midrange, similar to the effect of installing a Bigsby on a Gibson ES-335.

The sideways motion of the Tremor Bender is similar to that of the vibrato used on an early Gibson Les Paul/SG. It requires a bit of acclimation; if you are familiar with the functionality of a strap-actuated bender such as those made by Parsons/White or Glaser, you’ll have to adjust more than those who have never played one – experienced benders tend to push down on the guitar’s neck, thinking the B-string will rise in pitch. To facilitate its usage, we tried playing with a thumbpick, which helps keep the pinky in a better position to activate the bender arm.

The Tele was initially strung with a standard set of .010 to .46 strings, but a quick swap of the .013 B for an .011 produced a huge reduction in the amount of pressure needed to activate the TB. That means you don’t have to modify your pick-hand technique quite as much, so manipulation of the bender becomes more natural. Pedal-steel licks start to come easily with just a little practice, and it’s fun and interesting to use the bender to modify chord shapes.

After getting a bit more comfortable with the unit, we tried setting the bender to intervals other than the standard whole-step bend. Set up for a semi-tone bend, it brought out sitar-like tones. Setting it for two steps tends to cause all manner of harmonic havoc!

The TB is available in several versions; the Tele version for American Vintage and Mexican Standard guitars. The Strat model is usable only on models with vibrato bridges with six mounting screws – and yes you can use the TB with the stock vibrato. The unit for Gibson-style guitars mounts on the studs of a stop tailpiece and can also be used sans bender arm to facilitate a Bigsby.

Given the usability, quality of materials and workmanship, and retail price, on all counts, Don Thompson can boast “mission accomplished.” – Zac Childs