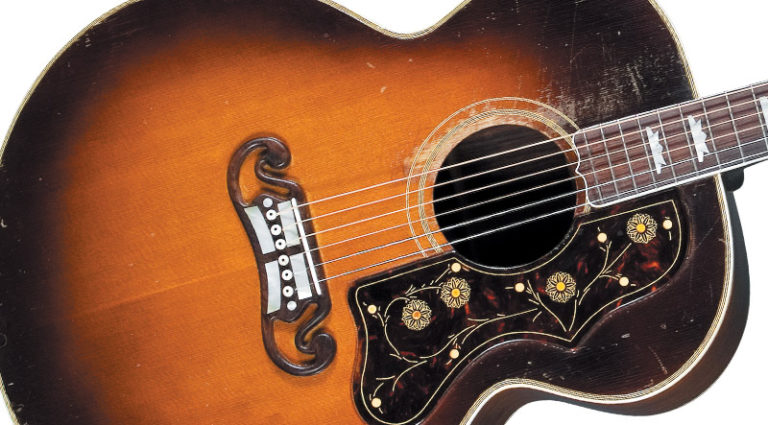 The Gibson company was founded on the belief that carved-top guitars were superior to flat-top designs, and consequently, Gibson was a reluctant entrant in the rising flat-top market of the 1920s.

Add the fact Gibson, more than any other company, was still determined to make the world’s best mandolins, banjos, and archtop guitars, and it’s not surprising that the ’30s had almost passed before Gibson turned its full attention to flat-tops and designed a model that would rank with such legendary Gibsons as the Super 400 archtop, the F-5 mandolin and the Mastertone banjos.

The Super Jumbo, as the model was originally called, barely got off the ground before World War II reduced Gibson’s guitar production to a trickle of inexpensive models. When it reappeared after the war, it was essentially the J-200 we know today, but it was fundamentally different from the pre-war version – with maple back and sides replacing the original rosewood, making the pre-war version one of the rarest and most highly sought of all Gibson acoustic guitars.

Despite Gibson’s late start, the company’s flat-top designs came a long way in a relatively short time. Gibson had taken the easiest path to becoming a flat-top guitarmaker by simply putting a flat top on the body outline of the L-1, their lowest archtop model. It was a small-bodied guitar, only 131/2″ wide. The body shape was easily recognizable because, like all Gibson guitar models going back to Orville Gibson’s original creations, it had a circular lower-bout outline that did not flatten around the endpin. Gibson had actually tried a flat-top under its “Army-Navy” label at the end of World War I, but the L-1 of 1926 was the first regular-production model under the Gibson brand.

Like the archtops, the inaugural version of the L-1 flat-top had maple back and sides, despite the fact rosewood and mahogany were long-established as the preferred woods for flat-tops. If Gibson’s low opinion of flat-tops was not evident in the simple H-pattern top bracing of the L-1, it was clear in the company’s downward extension of the flat-top line to the L-0, originally a plainer version of the L-1 but quickly distinguished from the L-1 by an all-mahogany body.

Within two years of this lowly beginning, Gibson made an audacious play for the top of the flat-top market by creating its first artist-endorsement model for guitarist/crooner Nick Lucas. The deep-bodied Lucas model of 1928 still featured the small circular body of the L-1, but the wheels of flat-top development were now in motion. In 1929 the obscure model HG-24 (with round soundhole plus 4 f-holes and an inner baffle), which was designed for Hawaiian use but produced nevertheless with a 14-fret round neck, introduced the 16″ dreadnought body shape to the Gibson line. By 1931, body sizes on the smaller models had increased by more than an inch to 143/4″, and the shape of the lower bout became more traditional and less-circular. In response to Martin’s success with its dreadnoughts, which were named after the largest battleships and introduced in 1931, Gibson came with the Jumbo, a dreadnought model named after the largest elephant and introduced in ’34.

By the end of ’36, Gibson had introduced the rosewood Advanced Jumbo and mahogany J-35, two models that would secure the company’s reputation as a flat-top maker in the same league as Martin. But being in the same league was not enough for Gibson. The company had attempted to blow its archtop competition out of the water in 1935 with the bigger and fancier-than-ever Super 400, and by the end of ’37, Gibson was making the same move on the flat-top market.

The new model was just under 17″ wide – a full inch wider than Martin’s dreadnoughts and Gibson’s own Jumbos. To make it look even bigger, Gibson reverted to the circular lower bout of the original small-bodied flat-tops. The first of these was made for singing cowboy movie star Ray Whitley. The body size was the same as Gibson’s L-5 archtop, and the neck featured the L-5’s pearl block inlays (custom-engraved) along with the L-5’s flowerpot peghead inlay, so the first examples of this new guitar were labeled “L-5 Spec.”

This was a truly special model. The back and sides were rosewood, which promised a booming tone. The bridge resembled a handlebar moustache with open ends. Early examples had six individual saddle poles that screwed up or down for string-height adjustment. The pickguard sported a colorful, engraved floral design. Standard fingerboard inlay was a new “crest” (a.k.a. pineapple) pattern, which was repeated in a pearl ornament on the peghead – although some, such as this month’s featured guitar, retained the L-5’s flowerpot.

Gibson quickly gave the new model its own name. Although it was smaller than the 18″ Super 400, and it was not strictly a larger version of the Jumbo dreadnought, Gibson called it the Super Jumbo and, following the example of the $400 Super 400, added the new model’s price of $200 to the name. The Super Jumbo 200 was at first offered only by custom order, and some of Whitley’s fellow singing cowboys Westernized theirs with rope-pattern purfling and other custom features.

This SJ-200, from 1940, exemplifies a new model in transition. The bridge has the standard one-piece saddle rather than the six individual saddle poles. The fingerboard inlay is the crest pattern, but the peghead still has the flowerpot. Tonally, it is everything one would expect from a large-body rosewood guitar, which is to say spectacular.

The wartime break did nothing to dampen the appeal of the SJ-200 to cowboy/country artists, even though Gibson switched to maple back and sides. The reason for the change is not recorded. While it’s arguable that the sound of rosewood might be too boomy for a guitar as big as SJ-200, Gibson’s decision to abandon rosewood bodies went across the entire line. With maple back and sides, the postwar J-200 (the S in the model name has gone in and out of use) still packed plenty of power, and it produced a more balanced and – very important in the era before good microphones and amplification – more cutting sound than the rosewood version.

Eddy Arnold, one of the biggest country stars of the 1950s, kept the SJ-200 in the public eye; his personal guitar had his name inlaid on the fingerboard. Ike Everly played an SJ-200, and when his sons Don and Phil had their first hits, they custom-ordered a matching pair. The model’s appeal widened in the 1960s to include such icons as Elvis Presley, who owned a number of J-200s, and Bob Dylan, who featured one on the cover of his Nashville Skyline album. In the 1970s, a custom-painted J-200 became a signature image for country star Emmylou Harris, and it remains a badge of identification for country artists.

Gibson today calls the J-200 “The King of the Flat-tops,” and the king has produced quite a lineage – with an entire model family plus dozens of special issues. Despite the continuing popularity of the standard maple model, rosewood has gained a respectable following. Of the 40 limited runs and variations of the J-200 offered by Gibson in the last few decades, a dozen of them (30 percent) have featured the model’s original spec of rosewood back and sides.

This article originally appeared in VG‘s September 2009 issue. All copyrights are by the author and Vintage Guitar magazine. Unauthorized replication or use is strictly prohibited.