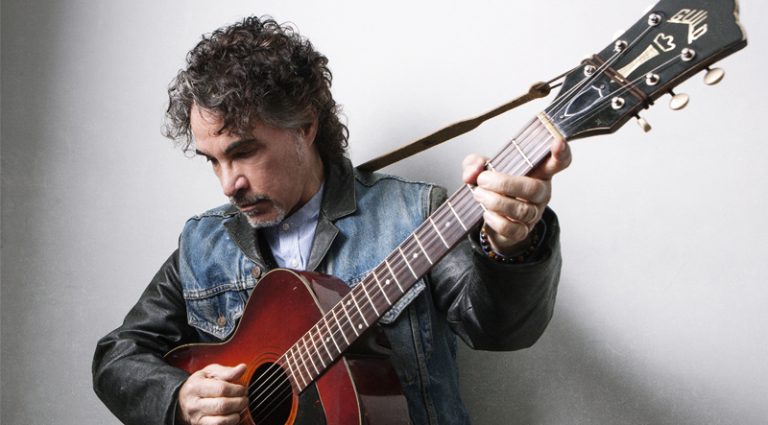 Most people know Hall & Oates as a pop-music hit machine that has sold millions of records. What you may not know is that John Oates is a lifetime student of the guitar with a passion for the music of Mississippi John Hurt.

Oates’ journey on the guitar began in the early ’60s and though it has taken detours, his heart never strayed from the essential art of music. His sixth solo album, Arkansas, was an inspired return to his earliest aspirations. Beginning as an homage to Hurt, the disc evolved into what Oates calls, “Dixieland dipped in bluegrass and salted with Delta blues.” It underscores his passion for the guitar, music from the late ’20s, and a Guild F-30 that accompanied Hurt through his prime.

How did you come to roots music?

I began playing guitar in the early ’60s; by age 11 or 12 I’d been playing for six years, doing rock and roll hits of the day. I had a revelation one Christmas holiday when a friend of my brother came back from college in North Carolina. The folk boom was happening on college campuses and he had records by Joan Baez, Dave Van Ronk, the Weavers, the Carter Family, John Jacob Niles, Hedy West, and all these esoteric artists.

I went, “My God! What is this?!” I dove in head-first and began to learn best I could. That became the foundation of my roots-music knowledge. When I moved to Philadelphia in ’67, I got a job teaching guitar to put myself through college at a folk-guitar center. Everybody thinks of Philadelphia as Gamble & Huff and R&B, and it certainly is. But the city has an amazing folk tradition. The Philadelphia Folk Festival has been going on for 50-plus years and coffee houses like Main Point and 2nd Fret were main stops on the folk circuit. I saw all the great traditional performers. Then, in the late ’60s I had the good fortune of meeting “Philadelphia” Jerry Ricks. I’d encourage people who want to hear great rural blues to listen to his albums. He became my teacher and mentor, introduced me to a lot of performers, and taught me the most-authentic styles. That became my foundation as a musician.

I saw him perform many times when he was rediscovered in the early/mid ’60s. I’d seen him at 2nd Fret and Main Point, at coffee houses, and the Philadelphia Folk Festival. I listened to his records and learned to play like him. He would sleep on my guitar teacher’s couch, and when he passed away in ’66, his guitar was given to my teacher. When Daryl [Hall] and I got ready to record in ’71/’72, I asked Jerry to play on our first two albums. He said, “Why don’t I bring John’s guitar so you can play it?” I was like, “Hell, yeah!” So I played it on Whole Oates and Abandoned Luncheonette. Jerry went on to play blues all over the world and moved to Denver in ’75. He sold the guitar to Harry Tuft, who ran the Denver Folklore Center. Harry then sold the guitar to David Ferretta, who also had a guitar shop in Denver. It remained with him until he passed away in 2016.

Harry read my book, Change Of Seasons, as did David Ferretta’s daughter, who was in charge of his estate. They found out that I played the guitar in the early ’70s, and a mutual friend, Tracey Yee, put us together. I ended up buying the guitar a month after Arkansas was finished.

What kind of condition was it in?

Very good condition. I’ve done some research with experts here in Nashville and believe it was refinished in the late ’70s, in the original sunburst style – not exact, because every sunburst is different. Its nickel tuners had been replaced with plastic keys. Other than that, it’s intact and documented as the ’64 Guild F-30 John played at the Newport Folk Festival after he was rediscovered in ’63. The folks at Newport wanted to buy a guitar for him; I believe it was Patrick Sky, a folk singer, who took him to a shop in Greenwich Village called Fretted Instruments. They told him he could pick anything and were shocked he picked the F-30 because it wasn’t the most-expensive guitar. But that’s what he liked. There are many photos of him playing it at Newport that year. He went on to play a number of guitars, but that’s the one most identified with him.

You bring a lot of Hurt’s feel to Arkansas.

The album was obviously inspired by him. I went in to record some Mississippi John Hurt songs in the most traditional way – just guitar and voice. I know almost all of his material and know it in a very authentic way because I watched him and learned from my guitar teacher, who spent a lot of time with him. After cutting a few songs, I stepped back and said, “Why am I doing this? It’s been done and I’ll never do it as good as the original. What’s the point?” Then I woke up one night and thought, “What if I played these songs with a band?” So I assembled a unique band. The rhythm section is guys I’ve been playing with for a while – Guthrie Trapp on electric guitar, Steve Mackey on bass, and Josh Day on drums. Then I enhanced it by inviting Sam Bush to play mandolin, and Russ Pahl, who’s an innovative pedal steel player. Then I brought in my secret weapon, Nathaniel Smith, on cello. The cello and pedal steel make a sonic bed that’s very unique.

The first track I played was “Stack O Lee” – textbook Mississippi John Hurt. When I added the rhythm section, it took on this early rock/roots feel – Sun Records, Memphis, late-’50s rock. That was the template, and it was all cut live to analog tape with no overdubs. I sang and played. Basically what you hear is what was performed in the studio. And it just kept getting better. I had plenty of Mississippi John Hurt songs, but started thinking of it as a musical snapshot of the era. The Mississippi John Hurt songs are those he recorded in the late ’20s for Okeh Records. So I started thinking, “What were the songs that were contemporary in that late ’20s and early ’30s, when he was recording for the first time?” I did some research and found that he was a big fan of Emmett Miller. So I thought I’d find some songs that were contemporary back then to complete this musical snapshot.

People mistakenly lump Hurt in with Delta blues, but he was not a Delta blues player. He was a Piedmont player, his style much more akin to ragtime. If you’re going to go ragtime, you gotta go with the maestro, and that’s Blind Blake. So I picked a Blind Blake song. The album took on a much richer palette of early American popular music. That’s what the album ended up becoming.

Did you spend much time with Hurt?

I met him backstage at 2nd Fret. He was quiet and shy, and I loved his sly sense of humor. He played songs like “Candy Man,” in such a cool, innocent way and with a smile on his face. I’ll never forget that. He’d pull off this dirty song and no one batted an eye. I have a hard time playing that song in public today (laughs).

His music defined my personal style, which is an amalgamation of Hurt, Doc Watson, Curtis Mayfield, and Chuck Berry. If you had to distill it all, that’s what I do… except I don’t play as good as any of them (laughs). You put them all in a blender and that’s what comes out.

Is it a challenge to play this music, then switch to a Hall & Oates tour?

It’s a mental recalibration, that’s for sure (laughs). The Hall & Oates tour has gotten bigger and bigger. We’re playing arenas starting in May and going until August. What I’m doing with this show is intimate venues. I love both, but they’re completely different. The goal in a arena is to make it feel like a small room, and in the small room to make it feel like a living room. I love the intimacy of smaller rooms, where you can tell stories and look people in the eye. I love the fact there’s no production and no big lights. It’s about being as organic and authentic as possible. 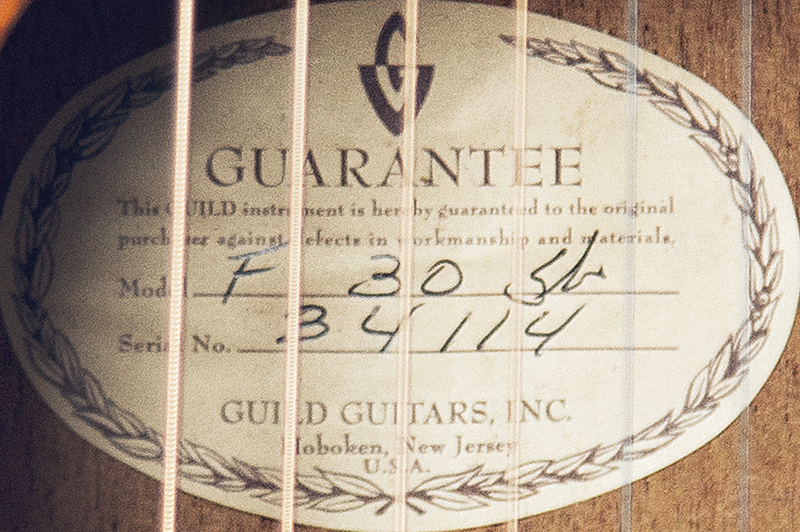 In small venues, your fingerpicking is under a microscope.

I live there very comfortably. I have an incredible group, and everybody has a lot of space to do their thing. Enhanced with mandolin and pedal steel, it takes on a much richer textural thing. It’s just a joy to play with these guys. When you surround yourself with great players, it’s going to elevate your game.

What’s your main guitar on tour?

My custom Martin 00-28. It’s a 00-sized body made of rosewood and spruce, as opposed to mahogany and spruce like a 00-18. I had it made at the Martin Custom Shop, with beautiful inlays, and gorgeous wood. It plays like a dream. It has a custom neck profile that we worked on a lot, and a Baggs pickup that I love. I’ve been working on my acoustic-guitar sound for quite a while and came up with a good combination of electronics that keeps it as natural as possible. It gives enough oomph to get it across onstage.

Did you use it on the album?

Will you take Hurt’s Guild F-30 on the road?

No (laughs). It recently had a neck reset and a little TLC to keep it playable. It spent so many years in the dry atmosphere of Colorado that when I brought it to Nashville, with all the humidity, it started to move. So I didn’t want to take any chances. It’s playing really well now and I want to keep it as authentic as possible.

DAN ROSE AND HIS TASTY TAKE ON A CLASSIC