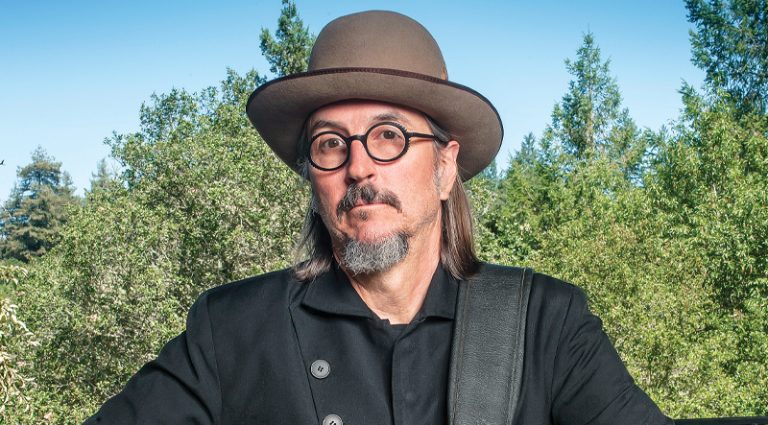 On their ninth studio album, The Desaturating Seven, Primus satisfies part of that equation, but with a twist. It turns a storyline based on Ul De Rico children’s book The Rainbow Goblins into tunes like “The Seven” and “The Scheme” while showcasing Primus’ quirky trademark sound. We asked singer/bassist Les Claypool about the album, his instruments, and other projects.

How did you devise an album based on a children’s story?

Years ago, it was one of the books my wife, Chaney, read to our kids, and I’d sometimes get roped in. And she read it when she was a kid. I remember looking at the artwork, thinking, “This is amazing. It would be incredible to put music to it.” Almost 20 years later, I finally did it.

Was it difficult fitting the storyline to music?

It was a bit of a challenge. I’ve always sort of avoided concept records because you instantly put up parameters. I like to shoot from the hip and write about whatever pops into my head or whatever happens to be going on; I like to be spontaneous.

So, that made it a little more difficult, but it was also easier in some other ways by just giving jumping-off points for visuals and whatnot. But the hardest thing is you’re about to write an album about goblins and rainbows, and it’s hard to get in there and write it without sounding like an overly cheesy ’70s art-rock album. I don’t think I say the word “goblin” anywhere on the record, and I don’t say “rainbows” that much, either. It’s more that I ran with the metaphor aspect of each piece I took on.

Which basses did you use to do the recording?

I used my six-string fretless Carl Thompson I call “The Rainbow Bass” quite a bit, which I hadn’t done in a while. So, I think that was exciting for people who are fans of that thing. There was also my NS upright and my black Pachyderm bass.

What’s the story of the Pachyderm?

I spent a lot of years playing the Carl Thompson four-string and have always loved it, but the tonality of it is very much “that bass.” So, I’ve been chasing my tone for many years, and I wanted to develop something. And that bass is very good for certain things, but with a lot of the Carl Thompson basses, you kind of tailor your playing to the bass because they’re such a unique instrument.

I’ve always wanted to design a four-string that was just exactly what I wanted. So, utilizing a bunch of ideas and a bunch of different elements of instruments that I’ve always liked, I came up with the Pachyderm. We’ve made several of them, and a good friend from high school, Dan Maloney, is making them for me. The latest is this black one. On the goblin record, I’m finally honing in on the tone I’ve always wanted. But you never know – I may look at it in a couple of years and go, “What the hell was I thinking?”

You’ve utilized Kahler vibratos on some instruments over the years. Is it difficult keeping them in tune?

Well, I’m in Primus… intonation doesn’t matter quite as much! It’s a balance. I can kind of tell when it’s out of tune, and if I bend up on notes, I can pull it back into tune. But there is a drunken quality to it, which I like. It’s got “loose intonation,” let’s just say that (laughs). But a lot of my favorite guitar players have that similar quality – a drunken tonality and intonation.

At this point, what’s more satisfying – playing in Primus or being a part of Claypool Cellars wine brand?

The wine is more my wife’s thing, but we definitely drink a lot of it (laughs). So, keeping me in high-quality juice is a wonderful thing. But as far as being able to pay for my kids to go to college, Primus is doing that.

I understand you are working on a second Claypool Lennon Delirium album. What’s it like to work with Sean Lennon?

It’s spectacular. We have a great friendship, but we also have a great working relationship. It’s a true give-and-take as far as bouncing ideas off of each other. There are not many people I can toss lyrical ideas back and forth with, as well as musical ideas. It’s a lot of fun.