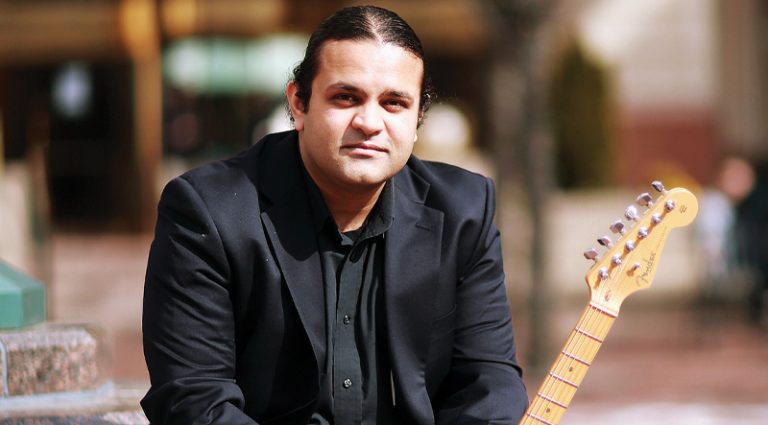 Traditional music from India makes ready use of stringed instruments such as sitars, veenas, and tanpuras. But Rahul Mukerji is on a different tangent.

“The influence of fusion has been more prominent in my life than traditional Indian music,” the guitarist explained. “I grew up on a diet of rock and metal, which are very different disciplines, so the complexities and intricacies of Hindustani and Carnatic music were difficult for me to grasp. As I grew, I learned to appreciate [those forms] a lot more, but the influence was minimal.”

Mukerji moved to America to pursue a Master of Science degree, but was further attracted by its musical diversity.

“I knew the U.S. would offer opportunities to push my boundaries and allow me to explore new bands and collaborations.”

He used several guitars to record his recent instrumental disc, Ma De Re Sha. The album’s cover alludes to Mukerji’s heritage, with a tabla propped next to a natural-finish Stratocaster.

“I bought that in 2009 from a local shop,” he said. “I’m drawn to natural finishes and it’s extremely comfortable to play. It has a swamp ash body with a maple neck with comfortable C profile.

“My primary guitar was a Suhr Pro Modern M1,” he said. “It’s my favorite because it is so versatile. I also used a Brian Moore iGuitar 8.13 and a Line 6 JTV-89 for rhythm.”

Taylor and Crafter acoustics helped on songs that needed a jazz vibe.

“I really liked the mood on ‘Fingerprints’,” Rahul said. “I thought it was a refreshing break and provided something different. And I’ve heard from a lot of people who enjoy it, so I’m glad it made the cut.

“‘Zidd’ definitely has jazz elements,” he added. “I’ve had that chord arrangement for years and was never satisfied with previous takes on it. One day, instead of trying the jazz tone, I kicked in the overdrive and went for it. It felt right; something about that raw guitar over that jazz structure. I added tablas, and the song took shape; it fit the theme.”

“A Path Less Traveled” is a New Age interlude with harmonics.

“I was looking to incorporate harmonics into chord voicings,” said Mukerji. “The fifth, seventh, and 12th-fret harmonics lent themselves particularly well to the G-major chord family. The tuning is standard, and I used the Brian Moore; the final sound is a blend of the piezo coupled with the pickup selector in the middle position. That setting worked best for the harmonics to pop.”

The closer, “Sinner,” is a hard-rock tune conceived during a jam.

Ma De Re Sha has garnered positive reviews and Mukerji is planning to assemble a touring band.

I’d like to get an ensemble together and start with local shows in Washington D.C, Baltimore, and the surrounding tri-state area before I consider an East Coast tour,” he said. “Other than that, I am looking forward to collaborating with others on upcoming projects and eventually starting work on a follow-up.”