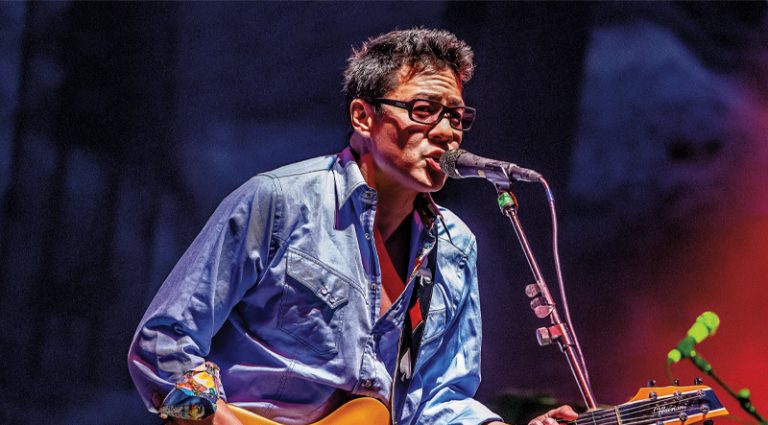 The latest album from Colorado’s Big Head Todd and the Monsters, New World Arisin’, delivers what fans have come expect from a band that has spent slightly longer than three decades honing its sound. The most obvious attributes are great songs and blistering lead guitar from namesake Todd Park Mohr.

But, Mohr points to a subtle change that came to his mind when the band entered the studio.

“I wanted to make a guitar pop/rock kind of record,” he said. “The last several have been very blues-based. I wanted this one to sound a little more aggressive.”

The album was recorded at E-Town Studios, in Boulder, which has a large room with a lot of space.

The writing, he added, mixed old with new, and the band was always prepared.

“I write all the time and usually demo things, then we rehearse. I never go into the studio without having all my ducks in a row. And, some compositions take a long time. I might sit on something for 10 years, so there are tunes on the record that have had parts around for a while.”

Mohr and the band are still based in Boulder, where he grew up. His musical education started by playing clarinet and sax in the third grade. He still plays the sax on occasion, and dabbles with keyboards, but the guitar remains the focus. The instrument entered his consciousness because of his dad.

“My father had a beautiful Gibson Hummingbird that he hardly ever played. All he could play was ‘On Top of Old Smoky,’ and he taught me to play that. Then I ended up plunking around more on that guitar and started taking it pretty seriously in high school and into college.”

Taking it seriously meant playing in a band, and that band is essentially the same people he plays with now, though they’ve added a keyboard player. The group’s longevity, he says, is “very special.” When they first started rolling, they played nearly every gig they were offered.

“We did house parties and just begged, borrowed, and stole for gigs. We drew a thousand-mile circle around Denver and picked places we could drive in our van – Chicago, Austin, Minneapolis, San Francisco.”

Like most players, Mohr’s first guitars were cheap copies of popular guitars. He also remembers a couple of Kent hollowbodies.

“My first what I would call ‘real’ guitar was a Strat that somebody actually gave to me. A college guy. I guess he was frustrated trying to play, so he just gave it to me.”

“I have an A.J. and an Ashburn,” he said. “I’ve become really fond of those guitars, and anything else just seems really clumsy to me. I’ve tried others, but can’t seem to get away from Strat and Tele styles.”

His amp of choice is a Magnatone Twilighter he runs through a 4×12 cabinet with four Celestion 30s.

Mohr never envisioned music as a career, but can point to many high points including opening for Robert Plant, the Allman Brothers, and Neil Young. He also got to record with one of his biggest influences, B.B. King, and for two months rode a bus with the late Hubert Sumlin.

The band’s heavy road work early on helped them build a huge fan base that in the two decades since has nourished their every effort.

“The music industry has changed drastically over the course of our career,” he noted. “Parts of it are very fluid. But, the bread and butter is playing live. Our fans enjoy seeing us, even multiple times.

“We’ve been fortunate to have a steady fan base, and that makes certain business decisions really simple: Make your fans happy. That’s been our focus. Radio hits come and go, but the fans stick with you.”