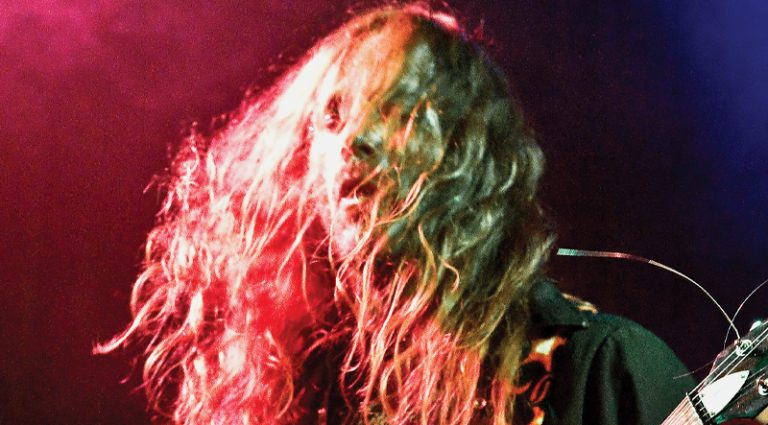 Whitey Kirst is known for smoldering lead-guitar tone and collaborating with punk-rock pioneer Iggy Pop. After four albums and hundreds of shows, Kirst’s 13-year tenure with Iggy went on hiatus when the legendary frontman reunited The Stooges in 2003 (see the feature with Stooges guitarist James Williamson in this issue).

Since then, he’s been fronting his own hard-rocking power trio, Whitey Kirst and the Web of Spider, utilizing a revolving rhythm section that has included original Motörhead drummer Phil Taylor, Black Sabbath touring drummer Tommy Clufetos, and Kirst’s brother, Josh, on bass.

“I like to play as a three-piece,” Kirst said. “There’s a lot of space and you don’t have to worry about so many players being confined to the structure of something.”

For their latest record, The Old Road, Kirst had the band play live in the studio. We recently sat to speak with him.

Which amps did you use for the album?

For most of it, I used a Crate amp modified by my friend, Doc. I call it White Lightning; it’s white with lightning bolts, chrome ladies taken from mud flaps, and 300 watts! It’s pretty loud. There’s an old Marshall JMP on there, as well.

You often use amps atypical of expectations.

On my last tour with Iggy, I used a Carvin X100B that I got in the ’80s. I really like the way that amp sounds. I also had a Marshall and a Crate VC5212, which I think is just a great-sounding little 50-watt tube amp with two 12s. I’ve still got it, but I blew it up (laughs)! For cabinets, Musiclord made me some with 50-watt speakers.

You also built a career sans effects. Did you stick with that formula?

Yeah, it’s just my guitar straight into the amp. When I first started playing with Iggy, I used to use a Rat pedal, not for the distortion, but I found that if you turn the distortion way down and the Volume way up, it would just make the amp louder and give it more bite. I stopped using it because it was just one more thing to worry about. People want great tone and they get an amp for that tone, then they put all of these things in-between it and it really makes no difference what you’re playing through at that point.

And did you mostly play your SGs and Les Pauls?

I did. I have a white 1990 triple-pickup Gibson SG with a Seymour Duncan Invader in the bridge. That’s a great guitar, but it used to waiver a bit when moved around, like a vibrato. The headstock is missing wood from getting hit with Iggy’s mic. He’d swing the mic way out and I’d straighten the guitar as a shield and the headstock got hit one night! It also suffered a crack at the body joint and neck. Then, my brother intentionally stepped on it and snapped it in half, re-glued it, and it’s been fine ever since. I’ve also got a black triple-pickup SG Deluxe with mini humbuckers. I really like Les Pauls from the ’70s with maple necks, and I have a few of those. They just feel more solid. I have a ’77 Les Paul Standard that has a three-piece maple neck and it just feels different.

A decade or so ago, you had a custom guitar made, right?

Yeah, I met a fella at NAMM who owned the guitar factory Al that made Tokai Love Rock guitars, which I liked. He made me some guitars and the SG-style was meant to be a cross between my white triple-pickup and a ’71 Pro/Deluxe. The ’71 was my favorite SG; it had a Bigsby, felt solid, looked great, sounded great, and played great. Mine are fairly standard, with roller bridges, Grovers, and a Bigsby-type vibrato. They’re pretty solid, and two of them are triple-pickup with Invaders in the bridge.

But you’re certainly not a guitar snob…

Not at all. In fact, I really like cheap guitars; they’re fun, you don’t have to worry about them too much, and if something happens to them, it’s not a huge deal. Mike Starr (the late Alice in Chains bassist) and I went to Guitar Center one day and grabbed the two cheapest guitars we could find. I grabbed a Fender Starcaster with this skinny little neck, it was like the Rock Band edition (laughs), and I loved it! Mike grabbed a Squire Mustang bass and we sat there and jammed. We bought them and ended up recording with them. They sounded great! I’ve since changed the pickups in the Starcaster, but I used the stock pickups for recording. I just plug it into a big amp and let ’er rip!