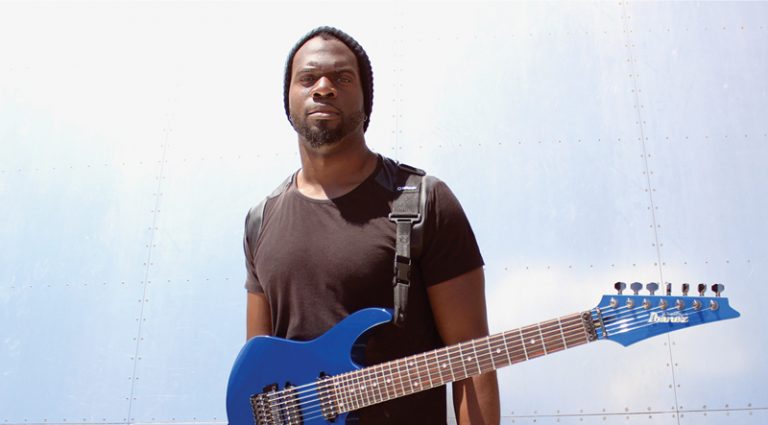 Al Joseph is breaking new ground in prog-metal. Known for his riveting guitar playing and instruction with Jam Track Central, he’s also an ensemble musician and vocalist. On his latest album, All Of Creation, Joseph brings together the drama and precision of contemporary prog with the soulfulness of African-American music. It’s a tuneful mix of sounds with killer guitar from top to bottom.

What was your introduction to metal?

I was five years old, watching Black Entertainment Television with my parents and Living Colour was playing. I was like, “Man, that’s cool!” I was young as hell but recognized there was something different about these guys. My dad isn’t a musician, but he knows so much good music. He already had their album. So I’ve always gravitated to metal. It affected me when I was really young and never went away.

When I started playing guitar, I’d always put on metal. I played in church and learned chords and basic stuff, but I liked metal. On the way to church, I’d listen to Korn and all these crazy bands. There were no teachers in town, but I had DVDs, a couple of books, and I taught myself a bunch of songs. I learned Creed’s whole catalog. They’re still one of the heaviest bands I know.

Then I started getting bored… until my dad popped in Surfing With The Alien. He already had five Satriani albums and never told me about it. That’s when I lost it. From then on, I couldn’t study. I couldn’t eat.

Joe Satriani and Steve Vai made me want to learn how to be a lead singer on guitar. Dream Theater got me into the instrumental stuff. I got into Dream Theater by watching John Petrucci on G3 Live In Tokyo. I didn’t know who Dream Theater was; I knew who Petrucci was because he played two songs at the beginning of that DVD. I was trying to watch Satriani and I was like, “Who is this other guy?” (laughs) I’d already learned a few Satriani songs, but it was the way Petrucci zeroed in on ideas. Satriani was more open. Petrucci was more like, “I’m gonna kick your ass on this section!” It was also the way he was able to fuse technique with Satriani’s power and melodic nature. That sealed the deal. I bought Dream Theater’s Live At Budokan DVD and I literally fell off the couch. I couldn’t believe people were playing music like this.

How was the writing process for All Of Creation?

It was an growth thing. I really wanted to impress people. Then I saw Angel Vivaldi play live and I was like, “F**k this. I want to write music that jams. I want to make people move. How can I blend those two together? How can I write for guitar players, for myself, and everyone else?” I also love pop music, and wanted to have those straight-ahead elements. There are other elements, like on “Elysium,” where I’m bringing an old-school R&B shuffle vibe into metal. I let the music breathe instead of trying to saturate it with things that try to impress people.

I was at work when I heard this slap groove in my head. On my lunch break, I grabbed a guitar and started writing. What really inspired the album was the latest Dirty Loops album. It’s heavily R&B influenced. I also liked that they changed stylistic fields between songs. That’s why “Nightlights” was so acceptable to me. It has heavy elements, but for the most part it’s very R&B.

My new Ibanez Custom. It’s a straight up RGA seven-string based off the RG752. I wanted something a little more interesting on the body shape, so I went with the RGA. It’s a basswood body with a maple neck. I’m very simple to please when it comes to guitars; I don’t care about quilted-maple tops, and I like thin necks. The seven-string gives me the lower range to play the kind of music that I want to play.

What are your plans for the near future?

It’s all about this band where I’m singing. I was in a band before I joined Jam Track Central because I wanted to bring more fans to our band. The band split up, and now I’m known as a guitar guy. I’ve always wanted to be the virtuoso guy, but I also want to be a performer. I have this other side of me, and this band gives me that outlet.