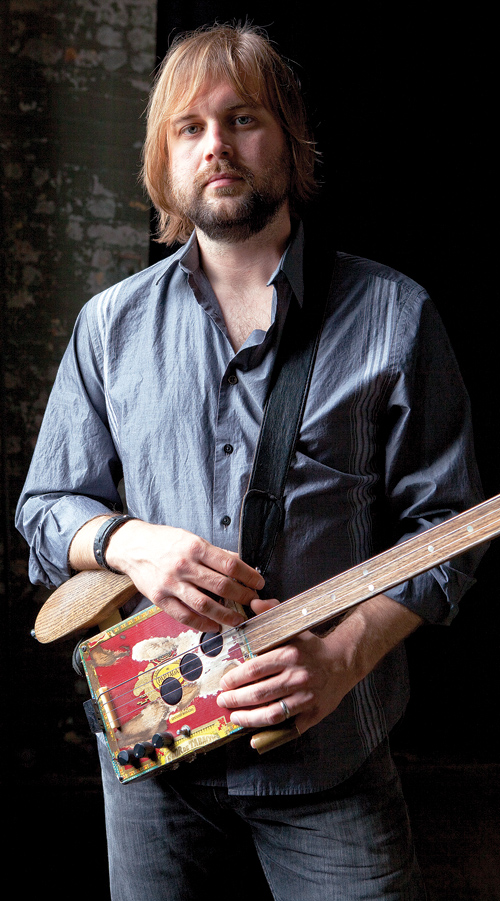 Growing up in a small Kansas town, 38-year-old Aaron Moreland took up guitar at 15, and his first garage band played classic-rock throwbacks like “Tush” and “China Grove,” occasionally getting more contemporary with R.E.M. and the Black Crowes. By 2001, when he met singer/harpist Dustin Arbuckle at an open mic, he’d immersed himself in acoustic blues.

Originally an acoustic duo, Moreland & Arbuckle had added amplification but ridded themselves of bassists by the time they signed with Telarc, releasing Flood in 2010.

“I was scared,” Moreland says of going with just guitar/harp/drums, “but after going through a few bass players, Dustin said, ‘I think we should go for it like the Jelly Roll Kings.’ After we did, I realized I could cover the low-end and nobody even notices.”

Their follow-up, Just A Dream, boasted a sound huge and raw enough to make Morphine (to whom they’re often compared) sound like Josh Groban. “We’d just grip it and rip it,” Moreland explains. “I learned a lot listening to [guitarist] Brewer Phillips with Hound Dog Taylor.”

The latest offering, 7 Cities, used an outside producer, Matt Bayles (Mastodon, Minus The Bear, Isis), for the first time. The pair’s eight originals and even a cover of Tears For Fears’ “Everybody Wants To Rule The World” retain A&B’s blues roots, in feel if not necessarily structure – what many roots acts attempt but seldom achieve.

What music first attracted you?
The first stuff I remember really grabbing me was Kiss 8-tracks, when I was about five. In such an isolated town, the radio was my influence. I was never exposed to MTV, which is unheard of for a musician my age. I’m kind of proud of it, actually. So I grew up on classic rock, and then I discovered some blues. My step-dad was a big B.B. King fan.

The first time I heard “Smells Like Teen Spirit” by Nirvana was at a high school dance, and I knew nothing about them or the grunge movement. It starts with such a clean sound, I thought it was some Kinks song. Then the drums come in, and Curt Kobain kicks the distortion up. Totally blew my mind. It completely changed my grip on reality and what music I wanted to play.

Besides just learning a repertoire of hits, were there any guitarists who specifically influenced you then?
Jimmy Page, for sure. There’s probably no band that was more influential to me than Zeppelin, and Page just covered so many bases; he could do anything. Whether it was acoustic or slide or straight-ahead lead, writing great riffs, playing real pretty, I could go to that well and get some inspiration.

A college friend had a bunch of Library Of Congress recordings, and then I heard the ’60s, rediscovery stuff of Son House, like that kick-ass version of “Death Letter.” It just stopped me in my tracks. I probably played that thing 40 times in a row. And my life literally has never been the same since. It took me years to figure out how to play that. So when Dustin and I started playing together, it was just pre-war blues stuff. I hadn’t played an electric guitar in about seven years.

Explain your cigar-box guitar.
The way the guy built the cigar-box guitar, the bass string is completely independent and goes to a bass amp. It’s ingenious. We were at the King Biscuit Festival in Helena, Arkansas, and a guy asked me to sign a cigar-box guitar he had. It was super-cool, and I asked him if he’d build me one. He’s a Fed Ex airplane mechanic who’s built a handful of these. Prior to getting that, I’d been playing guitar with just my fingers, no picks, so there was almost no learning curve to playing the cigar-box thing.

What’s your basic setup for touring America.
I like the Gibson model called The Paul, made out of walnut. They sound fantastic, and they’re much lighter than a Les Paul. I’ve had mine since I was 16, and recently I bought another one.

I have a bunch of guitar amps, but my main one is a custom-made 25-watt Blue Pepper, [made in] Wichita, with a couple of 6L6s. I run it through a single-12 Fender cabinet with an Alnico Gold. We tour in a Suburban, so space is an issue. I don’t use any distortion pedals; that’s 100 percent from the amp.

On the new CD, we wanted to push our boundaries and push the producer’s, but still capture the energy of the band live. I think that’s missing in too many records.