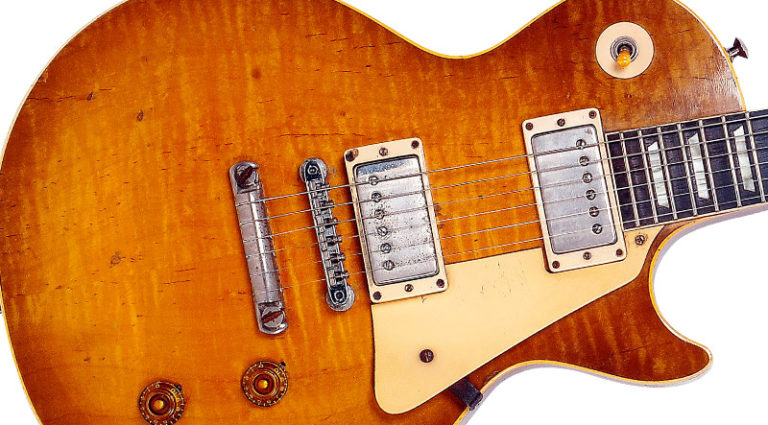 The mere mention of a Gibson Les Paul Standard made between 1958 and 1960 commands attention. But one like this, made famous in the hands of John Sebastian in the Lovin’ Spoonful, will stop the show.

As the Spoonful emerged from the folk scene of Sebastian’s home turf in Greenwich Village, he and fellow Spoonful guitarist Zal Yanovsky (1944-2002) “went electric”; Sebastian acquired this ’59 from a local player named Skip Boone, whose brother – Spoonful bassist Steve Boone – found it in a pawn shop.

“The group was going to be a bit folk, a bit country, a bit blues, with a bit of Phil Spector (influence),” Sebastian said. “I thought that guitar – I didn’t know what a Les Paul was – would be good for that. I mentioned it to Skip, who was saving for a Gibson semi-hollow; one of the fancier models wired in stereo and with [the Vari-Tone circuit]. So he sold me the Les Paul for $125. I put medium-gauge flatwounds on it so it would resemble instruments I was used to.”

A week and a half after the sale, Boone wanted to undo the deal. “I said, ‘Skip, that’s all of my money; I can’t trade it back, and I don’t want a different guitar,’” Sebastian recalled. “The Les Paul was unique; I thought the sunburst finish gave it an old-timey vibe.

“In the ’60s, bands did not have 18 guitars and a guy who would tune them,” he added. “We had two – Zally’s Guild Thunderbird and the Les Paul. We were trying to sound like more than four people in a band by overdubbing, and Zal and I would often trade – me playing the Thunderbird, him playing the Les Paul – and they had an entirely different sound even though we were both fingerpickers who used thumbpicks. It created a weave rather than ‘You’re the lead player, I’m the rhythm player.’”

Steve Boone played a semi-hollow Guild Starfire bass, and because Yanovsky played a Thunderbird, the band endorsed Guild instruments. But Sebastian was so dedicated to his Les Paul he didn’t appear in any publicity photos with a Guild. Rather, he held an autoharp!

“Zally’s Thunderbird was an incredibly comfortable guitar,” Sebastian said. “The neck was one of the best. Maybe it was the fretboard radius, which was halfway between a Gibson and a Fender.”

At times, Sebastian said, his Les Paul drew special attention from other musicians. One was Mike Bloomfield, of the Butterfield Blues Band.

“My friendship with him started when the Butterfield band came to New York,” he noted. “I had a very close relationship with (Butterfield producer) Paul Rothchild. Bloomfield and Zal began to trade licks a lot, and I was hanging out with them. When he saw my guitar, he was absolutely gobsmacked! He had seen a gold one, but not a sunburst. I put it in his hands, and said, ‘I don’t know much about these things.’”

“He loved it, and the next time we crossed paths, he showed me a much more dramatic instrument with a lot more curl! For years after that, our conversations began with talk about Les Pauls. And he was a lead player, so he knew how to get the best sounds from an instrument.”

After departing Lovin’ Spoonful, Sebastian kept his Les Paul for three decades, pulling it out on one occasion when the band reunited to record for the soundtrack for the 1980 film One-Trick Pony, starring Paul Simon. He also watched the value of ’Bursts rise then finally sold his in the late ’90s. While bemused by the fact ’Bursts have continued to rise in value since, he has no regrets. And naturally, it’s gratifying when he hears other guitarists such as Greg Martin, of the Kentucky Headhunters, talk about how they became interested in ’Bursts after seeing him with Spoonful.

The guitar now belongs to Gordon Kennedy, one of the busiest guitarist/songwriter/producers in Nashville (and one of three sons of Jerry Kennedy, who played the lick on Roy Orbison’s “Oh, Pretty Woman”).

“I think my generation became more interested in what we were playing than the previous generation,” said Kennedy. “One time, I asked Jerry Reed which guitar he played on ‘Amos Moses,’ and he responded, ‘I don’t know…. it was a piece of wood!’ When I’ve asked my dad about amps on certain hits he played on, he says, ‘Probably whatever was in the studio.’ My generation holds these records, and the players, in such high esteem that we chase the same sounds and gear, to hopefully re-create them.”

“By the time I started thinking about how I’d love to get one, they were an investment, ya’ know? But, like a lot of guys, I wanted a guitar made the year I was born – 1959.”

Kennedy acquired the guitar from Gary Dick, proprietor of Gary’s Classic Guitars, and tried five of them before choosing it.

“It sounded the best,” he recalled. “The other four – two ’58s and two ’59s – were in better condition and had these stories about people playing them for just 30 minutes, then putting them away. But the Sebastian guitar sounded great. When I heard it through a blackface Deluxe Reverb, it was over.”

The guitar has a headstock repair – the damage having been caused by an baggage-handling incident with an airline during Sebastian’s ownership, and Kennedy had it examined at Gibson’s Nashville plant.

“I took it to Tom Murphy, and he told me there was a small screw in the headstock that appeared to do nothing,” he said. “He backed it out slowly, and all is well. In essence, Tom repaired the repair. And we replaced the non-original Grover tuners with a set of Schallers from the correct year.

“I’ve done one other thing recently,” he added. “I noticed that turning down the Volume on the bridge pickup resulted in a dramatic loss of high-end response, so I invited Phil Crabtree, from Gibson, to look at it. He took the plate off and found one pot that was different – from around ’68. As fate would have it, my friend Phil Bennett was there, and said, ‘I have a pot that could work.’ When Phil saw it, he said ‘It’s from ’59!’ He installed it, and the guitar sounded better.”

Kennedy uses the ’Burst for sessions.

“I used it on Peter Frampton’s Thank You Mr. Churchill,” he said. “And it’s all over Little Big Town’s A Place to Land.” He has also worked with Faith Hill, Carolyn Dawn Johnson, SheDaisy, and Ricky Skaggs’ Mosaic.

One of the more memorable involved “Invisible Man,” for the Frampton album. Co-written by Frampton and Kennedy, the song was a tribute to the Funk Brothers (session players on Motown’s early hits) and Motown guitarist Eddie Willis was on hand.

“We tracked the song at Blackbird Studio, in Nashville,” Kennedy recalled. “Eddie is the man who came up with – and played – the intro to (the Temptations’) ‘My Girl,’ and he played on countless Motown hits. Peter and I showed up 90 minutes early because we were so thrilled to be working with Eddie and other Funk Brothers. We each had a part in mind, and kept saying to each other, ‘Wouldn’t it be great if Eddie did the little stabs like he played on those old hits?’

“When Eddie sat to learn the tune, he listened through once, then, on the second run, there they were – the stabs – done only the way he can. It was such a magic moment. We were like kids at a music-fantasy camp! He was inducted to the Musician’s Hall of Fame the same year as my dad, and session players from that generation remain true heroes to me.”

Kennedy used the ’Burst while backing Garth Brooks on “The Tonight Show,” Ellen DeGeneres’ show, and at a gig with Frampton at the Ryman Auditorium. He also loaned it to Gibson for examination, and enjoys letting other musicians check it out.

“I love handing it to players and watching the fireworks,” he said. “One of my favorite reactions was from (Nitty Gritty Dirt Band guitarist) Jeff Hanna. He has a gorgeous 1960 ’Burst, and he invited me to bring the guitar one day when I went to write with his wife, Matraca. We went into a room where there was a Deluxe Reverb. Well, I knew what was about to happen… Jeff held both guitars and was looking at their tops; they looked so much alike. He plugged in and played a few notes. I said, ‘That’s a beautiful-sounding guitar.’ He said, ‘Thanks,’ then plugged in the Sebastian guitar, played the same several notes, and five seconds later stopped and simply said, ‘Oh…’

“That’s probably the best, most-accurate review of this guitar.”

Sebastian and Kennedy have gotten to know each other because of the instrument.

“I contacted him after I bought it,” Kennedy said. “He let me be a fan – answered all of my questions about how he did this and that.”

The two met at a NAMM show in 2009, and had a long conversation about their mutual respect for the instrument.

“There’s nothing like meeting someone you admire,” Kennedy enthused. “And finding him to be such a good soul… they don’t make them like John Sebastian any more, or the John Sebastian guitar, for that matter!”