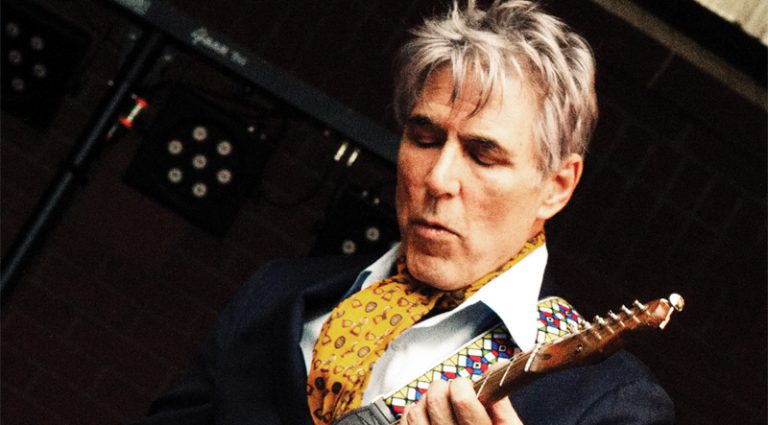 Fans of forward-thinking Telecaster spank and cluck will get a kick out of Jim Campilongo’s new album, Live At Rockwood. What he does with two hands and a guitar plugged straight into a Fender Princeton will give pedal freaks a complex. The Jim Campilongo Trio, with Chris Morrissey on bass and Josh Dion on drums, go off on beautifully telepathic musical tangents with inspired tunes and effortless musicality. Live At Rockwood has all that, an enthusiastic audience, and Wilco’s Nels Cline.

Why a live record?

A lot of my favorite records are live. I saw Stanley Clarke in concert in 1976; Ray Gomez was on guitar. I bought a little cassette recorder. There was some guy yelling next to me really loud, and I think I listened to that thing for like 50 hours. If the energy is there, I like it, but when it’s me, sometimes I want every little hair to be in place (laughs). I thought it had a great vibe. It was a lot of work to find what was good, and find what was good enough to put on a record sonically.

Having Nels Cline on the record is a bonus.

I’m really proud of “Cock ’N Bull Story.” There’s no way we would have ever done that in the studio. I think we changed keys at least twice and then went into this other part. It ended up being pretty epic.

We recorded every show, so that was real nice as opposed to going into a studio at 10 a.m., getting drum sounds, feel the clock ticking, feeling the money being sprayed out of a fire hose, then trying to play music.

I got a record that really chronicles what we’ve been doing and what the band has turned into. There are improv sections and the band is really free. It was doubly free because it was live at a place we’re very familiar with.

Does Live At Rockwood fully represent what you do on guitar?

It represents me as a collaborative artist engrossed with the trio. I’m way more willing to walk a tightrope with Josh and Chris. There’s a tune called “Jimi Jam” and it’s real high-octane. There’s a collective groove and it’s really working. On another night, there’s a collective groove that maybe isn’t working, or Chris might not be feeling it, or I’m not. If everybody isn’t on the same page, just treat it with kindness and support it. If I redefine the “One,” or if someone else does, it’s like we’re on their side and I’ll redefine my “One.” It’s kind of like taking chances is encouraged with kindness. There was no crabby jazz guy glare (laughs). From that springboard, I grew, and this album chronicles that.

On “I’m Helen Keller And You’re A Waffle Iron,” we’ve never done that during the solo section. That’s one of the reasons I liked it. It was truly in the moment and, as a listener, I really enjoyed it. On some of my earlier records, I would work out a solo just to expedite things because we didn’t have a lot of time. Pound for pound, I really enjoy listening to more-organic, improvised stuff more than something that’s crafted. I’m not saying crafted solos aren’t great, I enjoy listening to them, but what we’re doing is a totally different thing. There’s a place for both, but I really enjoy the improvised moments. It doesn’t sound like Ornette Coleman or something, but it was a long journey.

Your guitar tones are fierce…

It’s a ’59 Telecaster through a silverface Princeton combo with a Celestion G10. No pedals. It had a blown speaker for a couple of nights and I was kind of enjoying it (laughs); you can hear the blown speakers on “Jim’s Blues.” It’s a good blown-speaker sound. That lasted a couple of weeks, but by about the third week I was like, “I gotta get a new speaker.”  (laughs) But I caught the sweet spot.