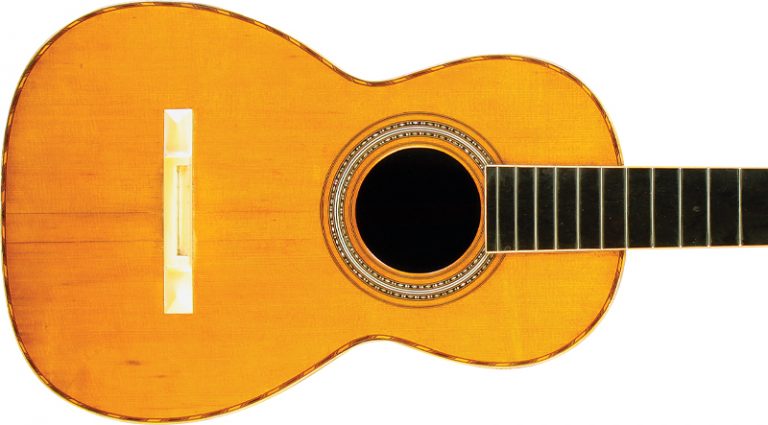 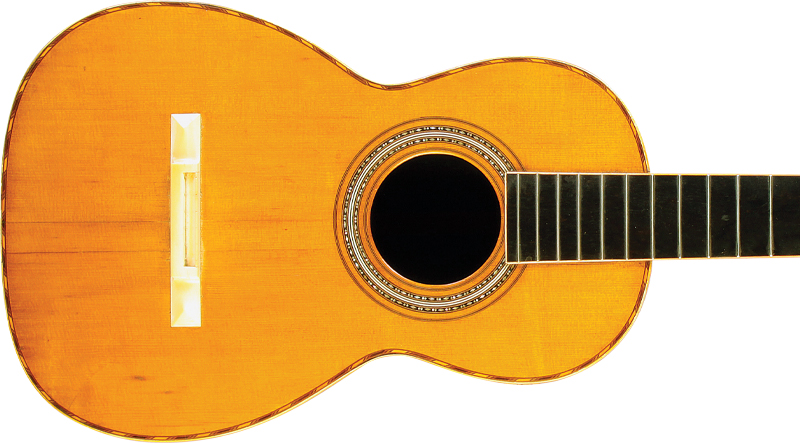 In 1833, C.F. Martin, Sr. and his family arrived in New York City. A trained luthier, Martin had studied under Johann Stauffer in Vienna and for more than five years ran a music store on Hudson Street.

But his family hated living in the city, and running a business kept him from his dream of being a guitarmaker. In 1839, they moved to Nazareth, Pennsylvania, but Martin continued to sell guitars almost entirely through agents in New York – Henry Schatz, Charles Bruno, and John B. Coupa. In the 1840s, the most active was Coupa, a Spanish-style concert guitarist, music teacher, and early endorser of the brand. So, it’s not surprising that the largest percentage of surviving Martin guitars from the period have a “Martin & Coupa” paper label and were sold through Coupa’s studio at 385 Broadway.

This is a rare Martin & Coupa with a body size midway between a Martin 1 (9.25″ upper bout, 12.75″ lower bout) and 2 (8″ upper bout, 12″ lower bout), and has a high level of ornamentation for the period. The top is braced in a five-strut fan pattern and has an ivory tie-style bridge (rather than bridge pins) – both features dating the instrument to about 1843. Today, we identify both features almost exclusively with classical guitars, but it’s important to remember that guitars of the period were not viewed as folk-music instruments and were played by people aspiring to learn classical compositions. In the late 1830s and ’40s, a number of talented Spanish performers toured the United States and influenced the New York guitar scene; the fancy wood marquetry on the middle of the sides is also found only on very early Martins with Spanish design features.

The “Spanish cedar” neck of this guitar is, in fact, not Spanish or cedar, but a South American wood related to mahogany. When cut, it smells remarkably like cedar, and it was used by Spanish builders of the period, so it earned the colloquial name.

The guitar’s squared-off peghead, seen today as typical Martin, was copied from Spanish designs used by makers in the city of Cadiz, including the diamond-shaped volute on its back. Most earlier Martins had a Stauffer-influenced peghead with all six tuners on one side, and its ivory friction pegs were preferred by professional musicians at that time because they made it easy to change strings quickly and because early metal gears were prone to rattle.

Spanish classical guitars did not have neck blocks, instead employed a one-piece design that extended the neck heel into the body, with a tab at the base to increase stability. Martin attached the neck to the body using a neck block and dovetail joint, but (in another concession to Spanish design) some of his earliest guitars (including this one) had a “pseudo” Spanish foot consisting of a small, flat piece of Spanish cedar added at the base of the block for the sake of appearance.

The 18-fret ebony fingerboard has no inlays, as was typical of Martins built prior to the 1890s. It’s theorized that Martin did not add inlays until competition forced the issue. At the turn of the 20th century, Lyon & Healy’s popular Washburn brand had fingerboard inlays, some of which were incredibly elaborate “tree-of-life” patterns. Based on estimated production numbers, it appears they successfully occupied a large market percentage at that time. It would be easy to ascribe Martin’s aversion to cost-saving measures, but in reality it was more likely to have been a reflection of a hardcore “purist” attitude, once again based on the Spanish classical design ethic in which fingerboard inlays were considered unprofessional and unnecessary. Perhaps the simple mother-of-pearl dot inlays adopted by Martin in the 1890s were a compromise.

The body bindings on this instrument are ivory, as well – a feature found only on Martin styles 26 and higher in that period. Lower models had wood binding (usually rosewood) and the least expensive had it only on the top edge. The guitar is hot-stamped on the Spanish foot and die-stamped on the peghead rear the pre-1867 “C.F. Martin New York” logo (lacking “& Co.”). The back and sides are Brazilian rosewood with an elaborate wood marquetry center back strip that matches the side and edge trim. Martin guitars of this period did not have standardized soundhole rosette trim, and this one is a custom mix of ivory, ebony, and mother of pearl.

To read more, see “Border Crossing: C.F. Martin and the Influence of German and Spanish Guitar Designs,” in the September ’16 issue of Vintage Guitar.