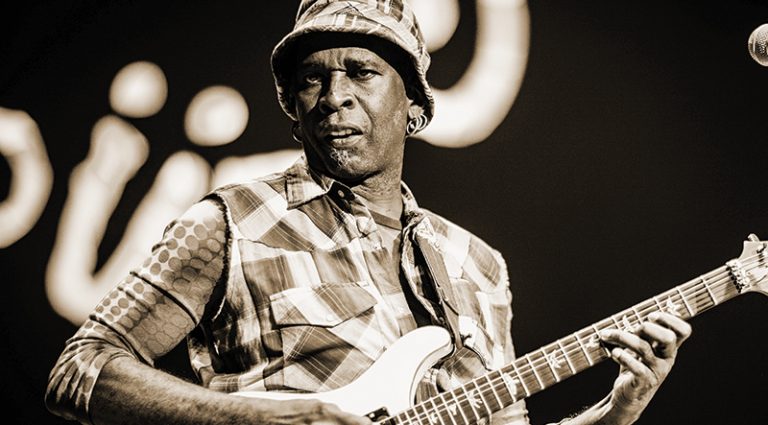 Vernon Reid went against the grain of rock guitarists in the 1980s, conjuring Parliament-Funkadelic, Ornette Coleman, Bad Brains, Carlos Santana, blues and hip-hop. His riffs and solos were a canvas to express the human condition.

Since the release of Vivid in ’88, Living Colour (with singer Corey Glover, drummer Will Calhoun, and bassist Doug Wimbish), blurred boundaries while making enthralling music that woke consciousness. The band’s latest album, Shade, continues its visceral legacy. Intense and provocative, blues is its spiritual center – but it isn’t your grandfather’s blues.

What took so long to make this record?

We had initial tracks down, but realized there was a component we didn’t have. We had disagreements about the writing, so we wrote more until the balance was there. We also went through a couple incarnations about how things should be recorded and mixed. We needed to do a couple heavier things, and we didn’t have it. So, we checked out different approaches and eventually got there.

There has to be unity in the conversation and, at the end of the process, you have to come out with something you can stand behind.

At its core, Shade is a blues album using the band’s sound and social worldview.

I wanted the vibe of the blues influence, but I didn’t want to make a self-pitying blues-rock record. We were asked to be a part of a celebration of Robert Johnson at the Apollo, which was a huge honor. We took on “Preachin’ Blues.” We listened to the original and the Derek Trucks version when Corey said, “Put those lyrics on top of that riff (laughs)!” That’s how we did it. There wasn’t even an amp in the dressing room. We were flying without a net and it turned out great. The fact that it was well-received and felt great was a huge inspiration. It was like, “Maybe this is the thing.” Corey and I were having lunch later and he said, “We should call the album Shade.” Later on I thought, “Maybe that shade is blue.”

I started on the record using my old Hamers and prototype Parker Vernon Reid model. By the end, I’d started working with PRS and was using a S2 Vela Custom. We’re coming out with a model called the Vernon Vela.

You’ve heard all the jokes about your 40-acre pedalboard.

Yeah. It’s a bit much  (laugh). I have this thing about using passive mixers, which are made by DOD. I plug my guitar into it and I can get four outputs and send the signal to various places. I can add my Roland VG-99, or my Kemper Profiling amp, which I used a lot on the album.

Which amps do we hear?

I was mainly going into a Randall amp or a Dual Rectifier, but I also used a Positive Grid; they do their own kind of modeling. At one point, I used my older Fractal Axe-Fx, a few old boutique amps, and Quilter amps, which are really cool. So, it was a lot of stuff going on.

How do you feel about the LTD Cult ’86 reissue of your old ESP guitar?

Matt Masciandaro made it, and it looks good. That old ESP was the first guitar given to me by a guitar company – my first endorsement instrument. The riff to “Cult Of Personality” was written on it. It’s part of history. Instruments like Van Halen’s Kramer, Santana’s Yamaha, or McLaughlin’s double-neck are powerful symbols, and the idea that one of my guitars enters that pantheon is flattering.

What do you think about the fact that sociopolitical songs you wrote in the ’80s are still relevant?

On one hand, I’m happy about that, but it’s also incredibly sad we’re having the same conversations about bias, race, and prejudice. “Time’s Up” is actually more relevant now as we deal with the effects of climate change. Even “Who Shot Ya?,” which is about Biggie Smalls getting shot.

The relevance conundrum is something I sit with a lot. One of the lyrics on Shade says “Nostalgia for things that never happened,” and that’s where we are in the world today.

I did a project with Melvin Gibbs and Will Calhoun called the Zig Zag Power Trio. It’s an instrumental record where we play a little bit of Ornette Coleman, Shannon Jackson, and some improvised things. We did a thing up in Woodstock. It’s going to come out next year. I’m very excited about it. I’m also producing artists, and in particular a singer/songwriter named Shelley Nicole who I think is pretty brilliant.