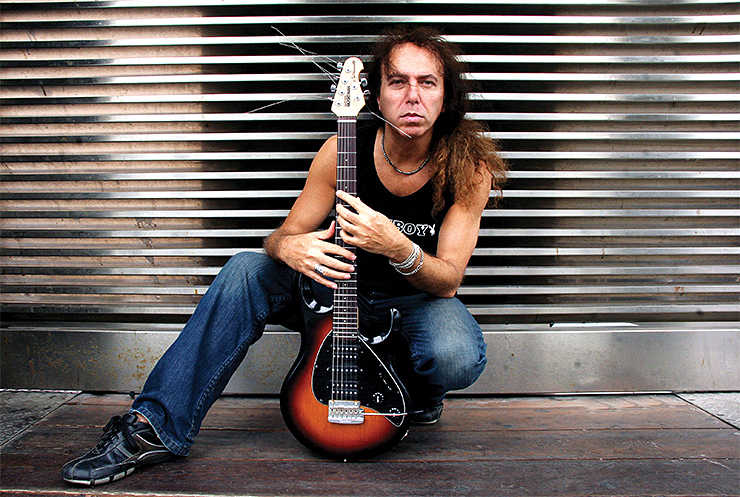 Grammy-nominated guitarist Alex Masi has been maneuvering his way through the shark-infested waters of the music industry since the 1980s. With an impressive catalog that includes everything from high-intensity instrumental rock to covering Bach, Mozart, and Beethoven, he keeps things fresh with diverse projects that push his artistry forward.
His latest release, Danger Zone, bridges the gap between death-defying shred and electronica. Taking a page from the Jeff Beck playbook, he uses programmed beats and samples in an energetic effort with hairpin turns, outstanding production, and impressive playing.

Danger Zone takes your playing to a whole new level.
Thank you. For the past 15 years, I’ve been a huge fan of The Prodigy. I really love the way Liam Howlett puts together structures. To the average person it sounds like a pop/techno song, but if you listen closely there’s so much layering of different structures. It reminds me of the way classical composers work; Bach would build layers of harmonic content and then on top of it put the melody. But the melody was going in and out of the harmony, so it would become like a complete structure. In the 19th century, European classical melody and harmony tended to get separated a little bit. You had your right hand on the piano pretty much taking care of the melody. The left hand was doing the chords and arpeggios. Meanwhile Bach in the Baroque era was all about making it all a unit. Melody and harmony was co-existing on the same level.

I try to approach music, whether it’s rock, jazz, fusion, or this thing that I’ve been doing lately, with that kind of mentality. It has to be a whole structure. It cannot be separated. It has to be a building. The roof has to be connected with something that’s going to end up with a foundation. It can’t just stand up there by itself.

You recorded everything yourself.
Yes. It was pretty much a labor of love. It took about six months because I kept taking off for the road. When I came back I had to restart the whole process all over again. Doing it all by yourself is a lot of fun, but its also time consuming.

How do you gain perspective when you’re working alone?
I go for a walk. I love jogging. I live close to the hills and I go running. It gives me amazing focus. I come back ready to go and I can do a billion things. I also listen to all kinds of music – I love everything from Indian music, to Pakistani music, Arab music, you name it. The only thing I’m not too crazy about is polka (laughs).

What do you hope to achieve commercially with this stylistic shift?
Records aren’t selling that well. I’m happy that it’s out there and it’s available for people to find online. I tell people to take a chance and listen to it. Rock fans tend to be suspicious when they start hearing about funkier rhythms. As soon as you mention the words “electronica” or “techno,” they immediately look at you like the antichrist. When they finally listen to it they realize that it’s pretty much rock. It just has a different arrangement and instrumentation. There’s still plenty of lead guitar.

When I do guitar clinics, I tell people, “Don’t approach music from a safe standpoint.” The beauty of music is to be exposed to surprises and something that might shock you. You may not like everything you hear, but you have to be fair to yourself and give yourself a chance to be exposed to stuff that might open up a whole new avenue. It might blow your mind.

What guitars are you playing now?
I’m endorsed by Music Man, and I think I have the best Silhouette ever made. It’s got the best neck I’ve ever found on any Silhouette, and when I do guitar clinics around the world, they give me one they have in the store. The neck that I have is like a miracle. So, I’m using that and an Axis. That guitar makes me want to play Van Halen all the time (laughs). I go off playing “Hot For Teacher” and I can’t stop (laughs).

And which amps do you use?
I’m endorsed by DV Mark. They just sent me this thing called the Multiamp. It’s unbelievable. I’m playing it right now. It’s all solidstate, but this thing is unbelievable. It’s so small, it fits in a little bag when I go to Europe. It’s got effects and it’s all quality stuff. It’s 500 stereo watts of preamp power!

What pedal do you use to save you from a crappy backline?
The Tonebone Radial Classic (laughs)!