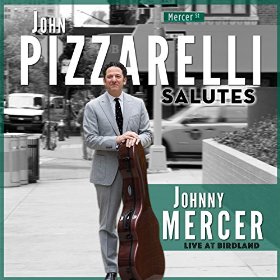 John Pizzarelli knows lyricist Johnny Mercer’s timeless compositions inside out. He’s recorded them on various albums and was a cast member of the 1997 Broadway musical Dream, which saluted Mercer’s music.

Mercer Street, released digitally via Pizzarelli’s own Deluxe Sounds label, samples Mercer tunes, both standards and obscurities, from the 1930s to the ’60s. He recorded it live at Birdland in 2014 with his quartet, his Moll seven-string Pizzarelli Model II model, and the Swing 7 horn section. The arrangements come from Don Sebesky, who’s worked with Pizzarelli before (and with Wes Montgomery decades ago).

On “I Got Out Of Bed On The Right Side” and “Goody Goody,” Pizzarelli offers the usual Bensonesque scat-guitar solos. “Dearly Beloved” features a crisp, single-string break. He comps as flawlessly as his dad, Bucky, on “Accentuate The Positive,” “Skylark,” and “Too Marvelous For Words.”

Pizzarelli sings Mercer’s Academy Award-winning movie tunes as a medley, accompanied only by his guitar. Lesser-known gems like the swing-era “Jamboree Jones” and “Slue Foot” also get their due. While “Something’s Gotta Give” features driving single-string work, his solo on “Emily” is a model of brevity and eloquence.

This self-produced labor of love allows Pizzarelli to explore music close to his heart – vocally and instrumentally.