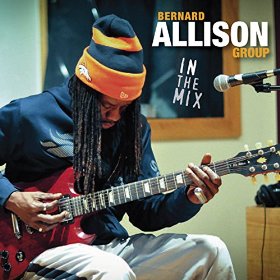 Bernard Allison’s father, Luther, was a modern-era blues great. And while Bernard is most definitely in the family business, blues isn’t the only musical color on his palette.

When he stretches out for a slide solo on “Move From The Hood,” he may be sizzling hot and all about the blues. Then, as he comes back to play out the reprise on Colin James’ “Five Long Years,” he is just as hot – but the tune and Allison’s approach are as much George Harrison, the Rumor, and ’70s rock as anything else. You know – like Lenny Kravitz with soul.

“Lust For You” is a quiet, reptilian organ-infused blues somewhere between early Traffic and Savoy Brown, and maybe reason enough on its own to pick up this album.

“Tell Me Who” is melodic soul-rock like some of the best of Shuggie Otis. Allison brings smooth ’60s Clarence Carter/Curtis Mayfield soul to “Call Me Momma,” written, notably, with his mother Fannie Mae Allison.

The heavy strain of soul music is in fact another characteristic shared by both Bernard and Luther, and it’s one of the elements that makes this latest album work so well.