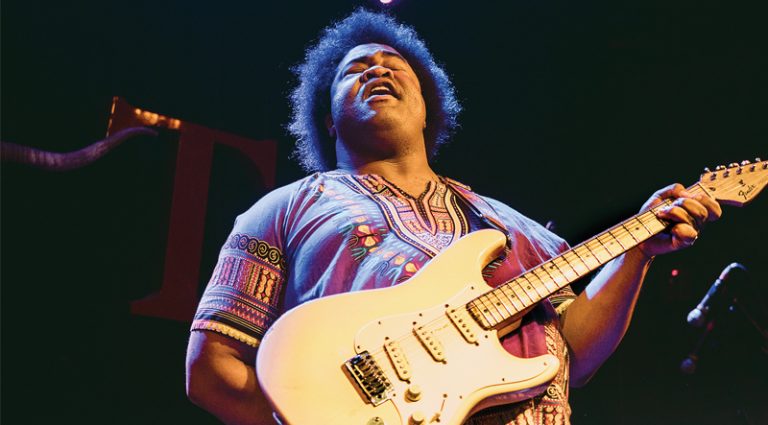 Seattle’s Jabrille “Jimmy James” Williams is a rare find in the guitar universe. At a time when music influences run the gamut producing a mishmash of styles, James keeps it real with a single-minded purity culled from the sounds of ’60s soul. His two bands, The True Loves and The Delvon Lamarr Organ Trio, unleash vintage funkiness in the Stax tradition. But James is no one trick pony. Armed with a Strat, a Silvertone, and an Arbiter Fuzz Face, he’s an R&B rhythm specialist schooled in the art of soul who turns people on to Curtis Mayfield, Al Green, and James Brown. The Delvon Lamarr Organ Trio’s latest record is called Memphis Concussion.

What’s your home base for guitar?

I come from blues more than anything. Blues and rock and roll has always been my big thing. Chuck Berry, Little Richard, and stuff like Bobby Blue Bland, B.B. King, or Freddie King – all the kings, basically, along with Bo Carter, Hubert Sumlin, and Howlin’ Wolf. The list is long. I was also into soul music at an early age and big into Curtis Mayfield and The Impressions. People my age never listened to that stuff, but I thought, “This is the greatest stuff ever!”

Was it tough finding kids your age who played R&B?

Yes. In high school, I was in a band that played James Brown and Kool & The Gang, but finding people who were into Wilson Pickett was very hard. People were into Earth, Wind & Fire, but I was more into Bobby Blue Bland and Wilson Pickett, so I was the odd man out. Contemporary music didn’t say much to me. Two songs that got me into guitar were “My Girl” and “I Second That Emotion.” Those songs spoke to me. I loved the lyricism; the lyrics and the music told a story. I didn’t fit in, but I wasn’t trying to.

Kids were wearing Reeboks and I was wearing bell-bottoms. They thought I was weird because I was into Jimi Hendrix (laughs). My friends referred to me as the 80-year-old man because they would say, “You listen to stuff my grandparents listen to.” I couldn’t fall in line. Delvon Lamarr and I have known each other off and on for years, and the reason we get along is because he heard what I was hearing. When we first started hanging together, I would pick his brain. He asked me, “Do you know ‘Can I Change My Mind’ by Tyrone Davis?” I said, “Yeah, I know that!” I would play “It’s Your Thing” by The Isley Brothers and he would go, “Oh you know that one!” He would say, “Do you know ‘The Ghetto’ by Donny Hathaway?” “Of course!”

It’s amazing you two had such similar tastes in music.

There were songs that I loved to play, but I had nobody to play “We’re A Winner” by The Impressions. I was playing “Hollywood Swinging” when I was 15, in a high school band, so this stuff came back to me easy. We would play “Tighten Up” by Archie Bell & The Drells, and songs by Booker T. & the M.G.s. I also knew Sharon Jones’ entire catalogue.

You have that early-’60s R&B rhythm guitar style really dialed in.

I love rhythm guitar players more than anything. I love Jimmy Nolen and Teenie Hodges, who played with the Hi Rhythm Section. I love Steve Cropper, of course, and Robert White and Joe Messina of The Funk Brothers… also Catfish Collins and Curtis Mayfield.

What’s the story with Memphis Concussion?

I used to do these Tuesday-night jams and Delvon would come up with a bass line. I’d just jump in. I didn’t know what was happening. We added some stuff here and there and we came up with “Concussion.” It had a James Brown feel but with a different beat. Then he had another song called “Raymond Brings The Greens.” We’d try different things. We just let whatever happens happen.

We play the music the way we feel it, and make records that we would groove to ourselves. All the songs that happened from that session happened spontaneously. The song “Al Greenery” was just something we were messing with. I asked Delvon, “Do you know the song ‘Love And Happiness?’” He was able to get that organ sound which I love, so we called it “Al Greenery.” We never know what’s going to happen. Sometimes it’s just a happy accident.