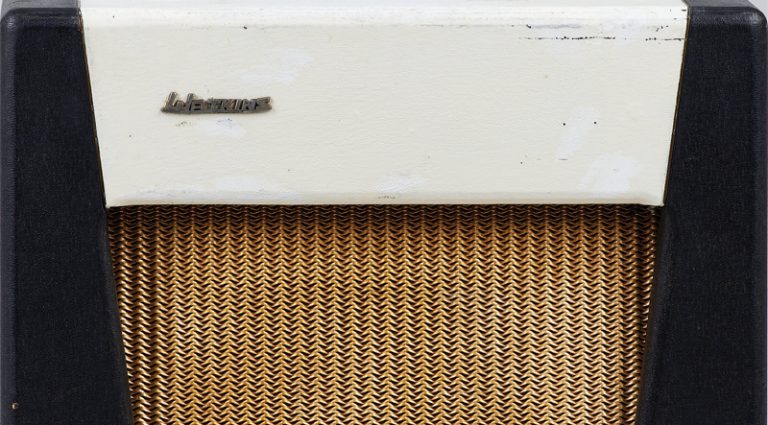 Watkins amps never landed big stars, or at least didn’t hold on to the endorsements of guitarists once they became big stars. Various Beatles shared a small late-’50s Westminster from the time they were still The Quarry Men, and other notables made their mark with Charlie Watkins’ compact, affordable Copicat tape echo. But prominent celebrity sightings? Nada.

Nonetheless, perhaps more than any other maker, Watkins played a significant role in launching the British guitar boom; Charlie’s amps veritably fueled the craze among younger musicians on their way up, and his more-affordable models launched the careers of players who went on to be huge stars standing in front of Voxes, Marshalls, Fenders, and Hiwatts.

With that in mind, this ’63 Watkins Scout is one of the cooler combos to have ever been propped behind a British-beat hopeful playing pubs and dance halls of the early ’60s. A tidy means of making a guitar as loud as anything shy of the big amps used by pros were using; today, it’s a fast track to a classic lower-watt Brit-rock tone, with an enticingly original twist.

Watkins’ best-known amp of the late ’50s and early ’60s was the Dominator, a hip, wedge-shaped 2×10″ combo (VG, March ’17) that was otherwise not greatly dissimilar to this Scout inside. With a slightly larger output transformer (OT) to drive its dual speakers, the Dominator put out a whopping 17-watts, which was then the company’s topping-out point, until the first 30-watters – the Control ER30 and HR30 – arrived in 1964. Around the same time, Charlie changed the brand from his surname to the snappier WEM, which he felt nicely echoed the popular Vox logo. In any case, their relatively low decibel-generating capability was likely one of the things that kept them out of professional hands, and by the time Watkins/WEM amps did get louder, they were already seen by many players as second-tier. That doesn’t stop them from being utterly hip, though, especially as seen through the rose-tinted retro glow of hindsight. 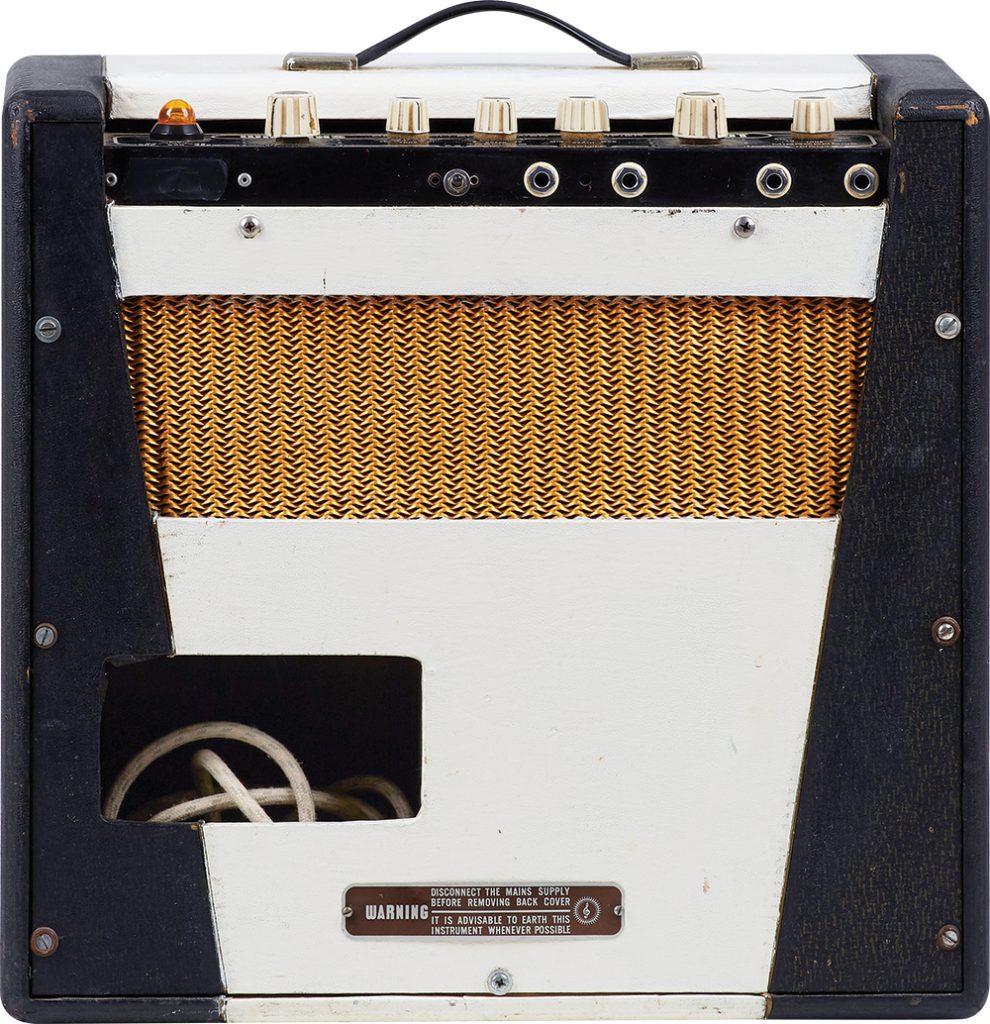 The Scout has two channels, one for microphone and one for instrument, with an individual volume control for each, shared Tone, and built-in tremolo with controls for Speed and Depth. There’s also a nifty Tone switch for the microphone channel, really more of a voicing/level switch to match the mic type correctly (note the “RIB” setting, for ribbon microphone, popular in the era). The chassis layout and circuit were much like those of other Watkins models, as well as the WEMs that followed in the mid ’60s. The Scout appears to have taken the place of the similarly spec’d Westminster that was deleted from the catalog at about the time this combo arrived. The tube complement includes three ECC83s (a European 12AX7 equivalent) for preamp, tremolo, and phase inverter; two EL84s in the output stage; and an EZ81 rectifier – Mullards all, and all apparently original to the fine amp on display here. The amp was rated at 14 watts, and that’s likely accurate given the duet of EL84s in cathode-bias with no negative feedback.

With that configuration, the Scout could have been a more formidable beast with a stouter 12″ speaker instead of its 10″ Elac with Alnico magnet, but Watkins wasn’t thinking very far in that direction. Until he busted out big-time in a different avenue of the volume wars (more below), Watkins was all about supplying a notoriously under-served domestic market with affordable gear to help get the guitar boom in motion.

An accordionist who played professionally for a time after serving in the Merchant Navy during World War II, in 1949, Charlie opened a record shop with his brother, Reg. Two years later they moved from Tooting Market to their home turf in Balham, another south-London borough, where they also sold accordions and other instruments. Charlie saw the guitar’s potential popularity, but despaired of fellow musicians’ inability to be heard amid the noise of horns and accordions while also being aware of the shallow pockets most had in ration-choked post-War Britain. After fledgling efforts that were supplied by an outside manufacturer in 1952, Watkins’ first semi-successful own-brand guitar amps emerged in ’54, the same year that the British government lifted 14-year restrictions on the sale of meat and bacon. Yet his primary guitar market – the London “skiffle” players that preceded rock and roll – was still a backroom/coffee-shop scene that involved no real money, and Watkins’ amps consistently reflected that ethos.

At a glance, and from a little distance, the Scout’s circuit looks like a typical hand-wired affair from the era, and in one sense it is. But those components are all hand-soldered to a relatively crude printed circuit board (PCB) with wide traces in evidence once you look more closely. Even so, the board carries lust-worthy components such as yellow Mullard/Phillips “mustard caps” like those found in the most desirable vintage Marshalls, plus some of the WIMA capacitors that were standard equipment for Vox. Even so, these were simply off-the-shelf parts in their day, which is why so many British makers used them. Otherwise, the Scout’s construction is largely consumer-grade – not badly put together, but soldering is a bit blobby and the wiring is of a standard commensurate with a product intended to meet a price point.

And yet, who cares? For all that, this Scout can sound superb, with a clear, slightly edgy clean tone and a snarly bite when cranked to the point where sweet, swirly overtones and an inherently British midrange grind emerge. It has a soft, round-sounding tremolo, too, operated on this example via mini-toggle installed by a previous owner in place of the footswitch jack.

Just a few years on from the release of this combo, Charlie Watkins and company were probing heavily into solidstate technology and devising far more powerful creations that would assist musicians in another realm of the volume wars. Watkins’ mighty WEM public-address systems were among the first to successfully power large outdoor rock festivals in the U.K. The first big test involved Watkins’ 1,000-watt WEM P.A. rig at the 1967 Windsor Jazz and Blues Festival for performances by Small Faces, Cream, Fleetwood Mac, and others. Though 1,000 watts might today seem a paltry output rating, it was unprecedented at the time; the previous year, the festival used a system totaling 200 watts! After pushing the knobs to full for headliner The Crazy World of Arthur Brown (who at the time had the #1 hit single with “Fire”), Watkins was visited right there at the mixing desk by the Windsor constabulary and ordered to appear in Reading Crown Court on charges of disturbing the peace. He was acquitted, and would provide WEM systems of up to 4,500 watts for future Isle of Wight and Hyde Park festivals before abandoning the festival-P.A. side of the business later in the ’70s.

Charlie Watkins lived to be 91 years old and died in his south-London home on October 28, 2014.