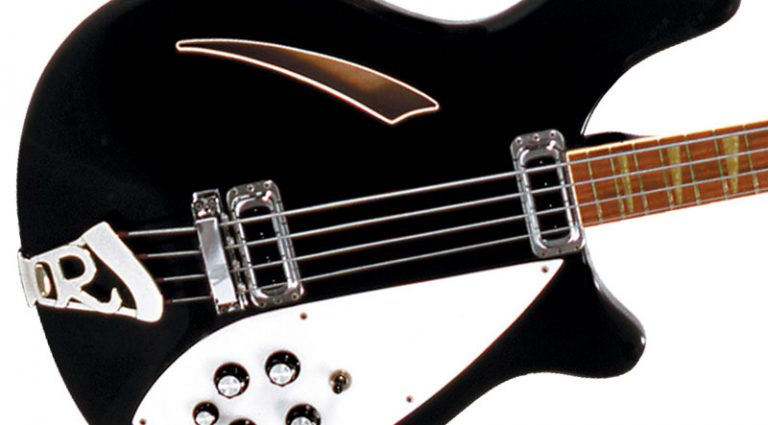 California’s Rickenbacker guitar company has a tradition of things a bit differently. One of the earliest electric guitars was their “Frying Pan” solidbody Hawaiian. And the company’s 1930s Spanish and Hawaiian models were among the first electric guitars ever marketed.

Rickenbacker has been family-owned since late 1953, when electronics parts distributor F.C. Hall bought the brand from Adolph Rickenbacker. One of the most important figures in the evolution of the “Hall era” was luthier Roger Rossmeisl, who developed the graceful and eye-catching lines of numerous Rickenbacker instruments during his tenure with the company from the mid ’50s until 1962. In particular, the Rickenbacker hollowbody designs that were introduced during the Rossmeisl era have proven quite enduring.

In the ’50s, Rickenbacker also took a different tack with their first example of the solidbody electric bass. Unlike Fender’s bolt-neck Precision or the set-neck Gibson Electric Bass, Rickenbacker’s model 4000, introduced in mid ’57, had neck-through construction with two body pieces attached like “wings.” In a 1993 interview in Vintage Guitar, company scion John Hall referred to the unique sound of Rickenbacker basses, noting “You’d have to call it a ‘high-fidelity bass’ sound, in that it produces a more-defined, sharper, and more-precise sound than almost any other bass on the market… It was the first bass to depart from the thumping, thudding Precision-type sound.”

It shouldn’t have come as any surprise that Rickenbacker would ultimately attempt to meld their successful hollowbody electric guitar style with an electric bass, and such a model, the 4005, was introduced in 1965, possibly as a reaction to the success of Gibson’s EB-2 and the Epiphone (by Gibson) Rivoli in original British Invasion bands such as the Animals and the Yardbirds. However, both of those instruments were semi-hollow and had a short 301/2” scale, while the 4005 had a 331/2” scale. The company also marketed a 4005/6 six-string bass guitar in ’65, and it, too, was full-scale.

Rickenbacker’s original 360/375 Capri series of hollowbody electric guitars were double-bound, but underwent a noticeable change in 1964, when the top edge was rounded and binding was removed from the rear edge. Accordingly, when the company opted to introduce a hollowbody bass the next year, its body had a similar style, but with a longer cutaway horn on the upper bass bout. The 4005 was introduced in the company’s Fireglo and Mapleglo finishes, and was later offered in standard Colorglo finishes (the one shown here is Jetglo).

The 4005’s headstock had the same “cresting wave” silhouette as solidbody Rickenbacker basses. The maple neck had a 21-fret rosewood fretboard and “Deluxe” appointments (triangular fret inlay and neck binding). Upon its introduction the model had chrome-covered bar pickups located right next to the end of the neck and right next to the bridge, to give the instrument maximum tonal range. As was the case with other Rickenbacker guitars and basses, the chrome pickups on the 4005 were eventually replaced by the company’s Hi-Gain pickups, as seen on this example.

The large, flat pickguard houses a three-way toggle switch, two volume controls, two tone controls, and (as found on Capri-style guitars beginning in ’62) a fifth knob that allows balancing the output of the pickups. Other standard comparisons to Capri guitars include a slash-shaped soundhole and an “R” tailpiece. The small snap-on cover over the bridge has a foam mute on its underside.

The 4005 was ultimately marketed in variants including the 4005WB introduced in 1966. This model was bound front and rear (WB stood for “white binding”). It, too, came in a six-string version.

The Rickenbacker 4005 was a unique idea, but ultimately proved unsuccessful. The 4005/6 was discontinued in 1977, the 4005WB was out by ’83, and the original 4005 was last marketed in ’84. They all have the legendary cool look of Rickenbacker guitars and basses, but their status as sonically important instruments is nebulous.