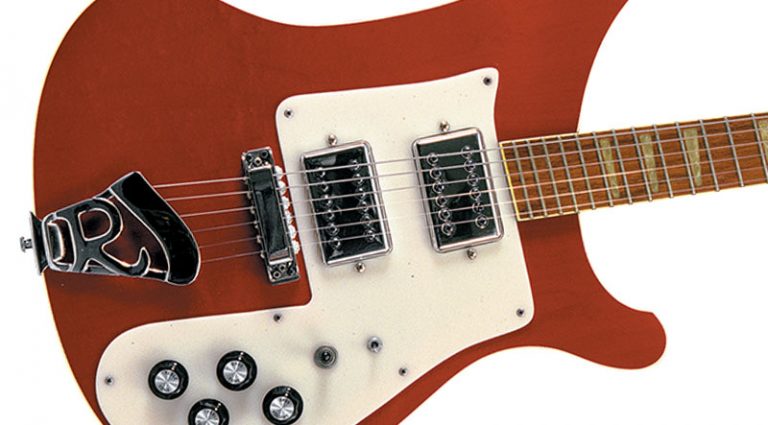 It’s hard to imagine an instrument other than guitar that has undergone more innovation through its modern history. Perhaps we do an injustice to pianos and cornets, which have reached their perfected forms and not changed much in recent times, but you could fill volumes documenting the wrinkles put on acoustic and electric guitars. Some guitar innovations are wonderful and remarkable, but others (to be charitable) leave you scratching your head. One of the latter can be found on the 1975 Rickenbacker 481.

The Rickenbacker guitar company was born of innovation. When Czechoslovakian-immigrant brothers John and Louis Dopyera (along with Texas-born Hawaiian guitarist George Beauchamp) began working on ideas for National resonator guitars circa 1926, they turned to metal and plastics fabricator Adolph Rickenbacher (a distant relative of the World War I flying ace Eddie) to make their metal bodies. In ’31, Beauchamp obtained a new electromagnetic pickup design from inventor Arthur Stimson.

This was not the first electric pickup. Legend (via guitar historian/author Tom Wheeler) has Gibson’s Lloyd Loar experimenting with electric pickups as early as 1924, but this is not confirmed, and technological constraints put any possibility of success in doubt. Tubes and speakers were still waiting to be invented in ’24, although this was the year that electronic sound recording (versus the old analog method) did appear. Stromberg-Voisinet (Kay) introduced the first commercially available electric guitar in Chicago in ’28. Dubbed the Electro, this apparently consisted of an acoustic guitar sporting a transducer played through an amp with flat-out volume (no controls). This was heavily touted in the Music Trades magazine at the time. The new system was broadcast on WLS in Chicago with various Western bands, but was gone within a year. We don’t know why, but lack of controls probably didn’t help. Later evidence suggests only about 100 were made. None has ever been seen, as far as we know.

National’s George Beauchamp was a visionary interested in electric guitars, but National was not, so Beauchamp talked to Adolph Rickenbacher (who liked the idea) and they formed Ro-Pat-In, a shortened version of Electro Patent Instruments. The result was the famous aluminum “frying pan,” the first Hawaiian electric lap steel. Spanish electrics soon followed and the name of the company and the brand changed to Electro String Instrument Company around 1934.

Ready to retire, Rickenbacher sold Electro to F.C. Hall in ’53 and the Rickenbacker brand was born. One of the principal employees at the new plant was another former National employee named Paul Barth. At some point – the precise year is uncertain, but probably ’54 – Barth hired Roger Rossmeisl, a young would-be guitar designer from Germany. The son and namesake of the Roger brand of German archtop guitars (built by his father), Rossmeisl had come to America and had a brief, unsuccessful stint with Gibson. Among the legacies of Rossmeisl’s gig at Rickenbacker was the redesign of the company’s famous Combo series and, in particular, the introduction of the “German carve” – the rounded edge-relief around the top – to American guitars. It was from Rossmeisl that a young Semie Moseley acquired a taste for the German carve found on his later Mosrite guitars.

Before moving on to design a line of acoustics for Fender in the ’60s, Rossmeisl contributed one other important thing to the Rickenbacker heritage – he created the 4000 solidbody bass guitar with the unique “cresting wave” shape that would become one of Rickenbacker’s most distinctive designs. It was most often associated with Ricky basses, but it periodically showed up on six-string guitars like this 1975 481.
But it isn’t the cool shape that marks the innovation on the Rickenbacker 481. It isn’t the nifty, bound, wine-red maple body or the knobby headstock on the thin, bolt-on maple neck. It isn’t the swell humbucking pickups, the great cast “R” trapeze tailpiece, the crushed-pearl flag inlays, or even the phase-reverse function. It isn’t the decent sound that this piece kicks out. What makes this guitar interesting are the 24 frets.

The frets? Yes. That’s because the innovation on the Ricky 481 is the setting of the frets at a slight angle, not perpendicular to the fingerboard as on most guitars. The idea was that for most rock and roll players, the fingers of the left hand don’t attack the fingerboard straight on, but at a slight angle. Put your left hand in a playing position and you’ll see that the fingers land on the fretboard at an angle. Apparently, someone came up with this notion in the late ’60s, because angled frets were listed as an order option as early as ’69.

However, the slanted frets were codified with the 481 that was introduced in ’73. The one shown here dates from October of ’75 (OJ 6609). The 481 was accompanied by a plainer model 480 that skipped the body binding, fancy inlays, and didn’t have slanted frets.

So the question naturally arises: how do slanted frets work? Aye, there’s the rub. If you’re one of those players who likes to wrap his or her thumb over the top of the fingerboard, having the frets angled offers a very slight advantage. Of course, to get maximum extension you’re supposed to center your thumb in the middle of the back of the neck. This brings the fingers down a little straighter, minimizing any advantage of the angling. But as a pragmatic matter, you pretty much have to be told that the frets are angled when you play this guitar in order to tell much difference from a conventional fret job.

The slanted-fret Rickenbacker 481 had a pretty good run, lasting until 1984. Whether these are particularly rare or not is unknown, but you don’t see them very often. And when you do, this baby might just leave you scratching your head, too!