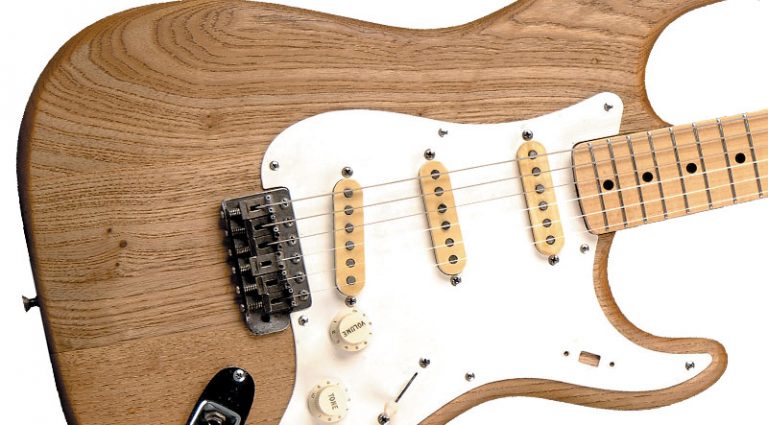 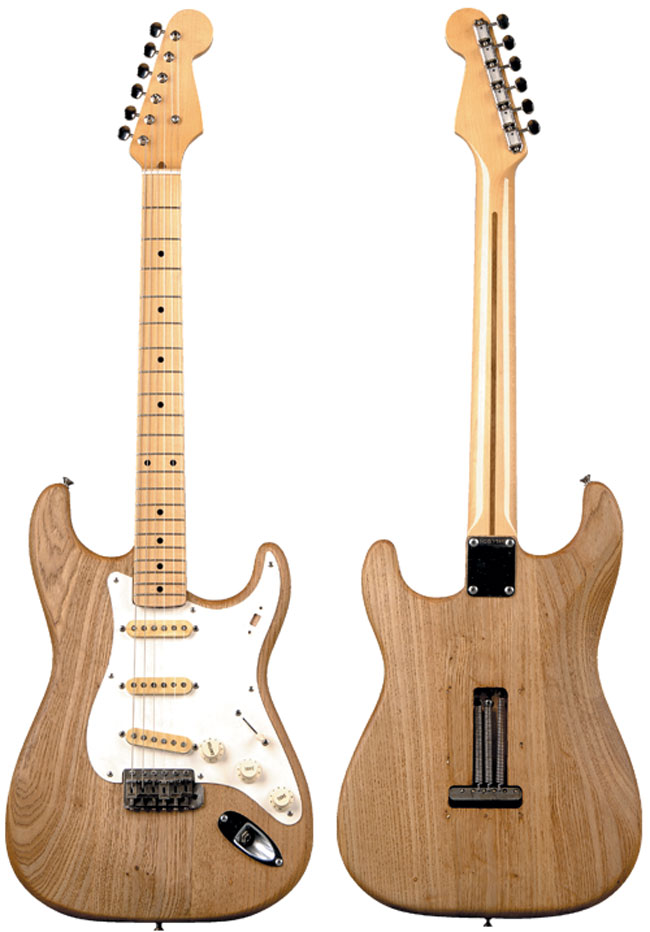 If you were a guitar – particularly one with a natural or translucent finish – your “fingerprint” would be the grain of the wood used to make your body.  And if you were the assembled-from-parts Fender Stratocaster belonging to Jerry Madderra, that fingerprint would be the key to unlocking your important history.

Madderra’s family moved from Oklahoma to California in 1940, and Jerry was born in Orange County in ’43. His father, Thomas, played several musical instruments, and in the 1950s helped assemble a band to perform in local clubs. Jerry and an older sister recall that in 1954 or early ’55, their father and a friend brought home a box of guitar parts he acquired from employees of Fender’s plant in Fullerton, who had become familiar with him through one of the band’s gigs in nearby Silverado Canyon. “They heated up an old soldering iron on the kitchen stove and started assembling a guitar on the kitchen table,” Madderra said.

Thomas passed away in 1957 and never detailed the acquisition of the parts or the guitar. “From the family, I gathered that it was a prototype and that dad was doing some field testing,” he said. “But I’ve since found that the guitar had already been field tested and put into production, so I wouldn’t have seen the point of him doing field testing. But that was what was said in my family at the time.”

As a child and young man, Madderra didn’t have any interest in playing guitar. But when he did start in the late ’50s, it was on the made-from-parts Strat. In 1960, he took the instrument to high school wood shop and worked on the body. “My father or someone had put a varnish finish on it,” he said. “So I sanded it down and put a Candy Apple Red finish on it.”

The instrument would go through more changes in finish. In the early ’60s, Madderra played bass in a band called the Rhythm Crusaders, and loaned the Strat to the band’s lead guitarist. 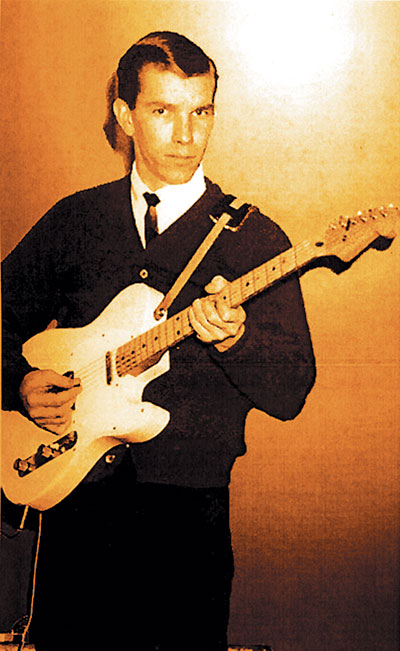 “By ’62, I’d moved to another band called the Hustlers, and was playing guitar again,” he recounted. “I’d decided that Steve Cropper was the coolest guitar player around, so I bought a Telecaster like his. It was lighter and stayed in tune better than the Strat.”

So the Strat went into a closet and stayed there for more than 20 years. “But I liked the neck on the Strat better than the rosewood neck on the Telecaster, so I switched them. I played the Telecaster with the Strat neck until I got my draft notice in ’66, when I decided to sell everything.”

The Telecaster with the Strat neck and a ’59 Fender Bassman amp were sold to the House of Music, in Santa Ana, for $300.
Madderra believes the Tele ended up with a singer/songwriter in Nashville with whom he has corresponded recently. In the mid ’80s, he played the Strat with the Tele neck, and in the late ’90s stripped the finish, exposing the bare wood. “I wanted to have it like it was when I got it. So I took it to guitar tech Doc Pittillo.”

Today, the guitar has a reproduction ’54 neck. Its three-way switch is a CRL 1452 with four patent numbers. The pickups have both been replaced. The owner says that one replacement occurred in about 1960, and the other in the ’80s.

The bridge is primitive, except for the saddles. “I don’t think they’re the ones Leo made,” Madderra said. “They appear to be 1954-production saddles that were put on the earlier bridge; they’re stamped with ‘Patent Pending’ and look like production parts rather than handmade, while the bridge looks handmade or perhaps like a prototype. The bridge plate never had chrome on it. And the inertia bar on the back is drilled for three springs, just like the one in the (Stratocaster prototype) photos taken by Leo Fender.”

Madderra thinks the neck that was on the instrument when his father got it was not the one on the instrument in those photos by Fender. “The one in Leo’s photographs seems to have a much, much darker finish than the one that ended up on my guitar,” he noted.

Madderra’s quest for authentication of the guitar began in the mid 1990s and later intensified when he posted images on an internet site called the Fender Discussion Page. He recalled that when the notion began to circulate that the body was from a prototype Stratocaster, “…there was a lot of skepticism at first. But we always knew it was a special guitar in that it wasn’t a production model.” 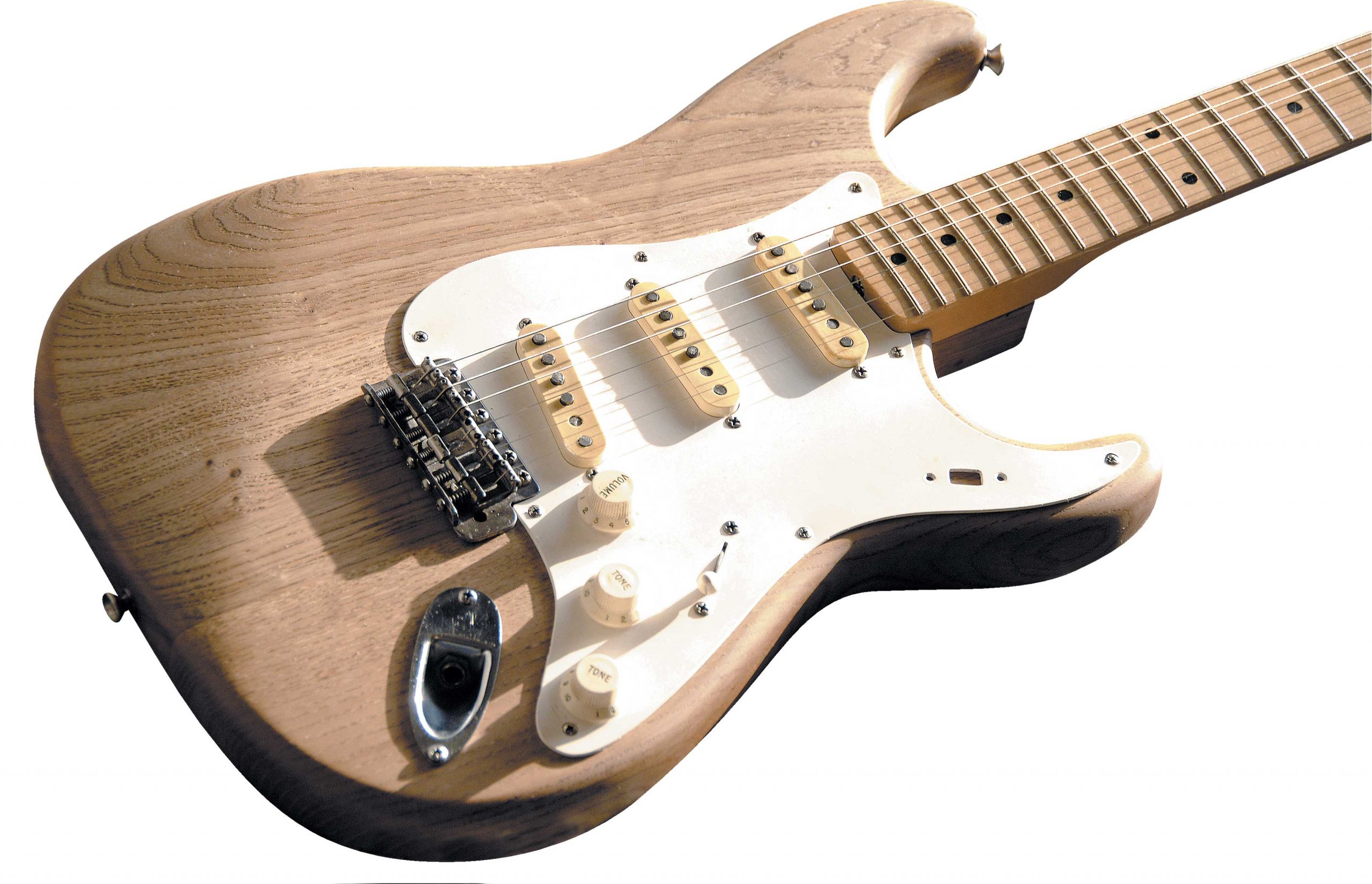 “The important thing is that it’s historically significant because it’s part of the chain of events that led to the Stratocaster,” Soest said. “You can see from the grain pattern and the routing that it’s the same body in Leo’s photographs. What was left was the body, the bridge, and the vibrato tailpiece block. The body looks like it’s been sanded a couple of times.” Smith points out the first experimental Stratocaster had a vibrato that was unsuccessful and forced Fender to try another design. But there likely were other experimental instruments. Accordingly, Soest thinks the application of the word “prototype” to this guitar might be inaccurate.

“The significant thing with this instrument is the fact that there are previous photographs from when the guitar was new,” he said. “And it was significant enough that Leo put it on a chair and took pictures of it. But it was a shop model, not made to be shown to the public. It was a step in the development. A prototype would probably be a working/finished example that had a way to go. But nothing prior from that period has shown up.”