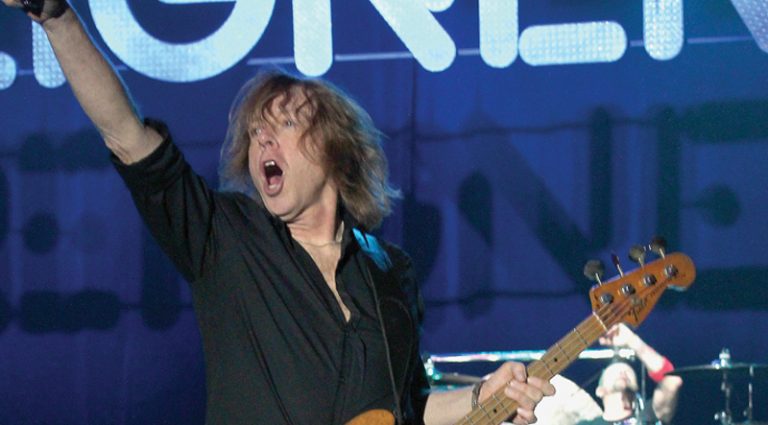 Jeff Pilson’s career has included many notable facets. He rose to acclaim in the classic lineup of the hair-metal band Dokken, and since 2004 he has the bassist for classic-rockers Foreigner.

Different genres don’t necessarily make for radically different approaches, and Pilson brought a high-energy approach to Foreigner, in the studio or onstage. Prior to a recent concert during the band’s 40th anniversary tour, he conversed with VG about his experiences and instruments.

Pilson began playing as a youngster in Milwaukee, and later moved to Washington state, where he immersed himself in music.

Asked about early influences, he recalled, “The first guys I listened to were Jack Bruce and a little bit of (John) Entwistle, though that was beyond me at first. So there was a lot of listening to Cream. The first thing I ever learned to play and sing at the same time was ‘Born To Be Wild’ by Steppenwolf. When I was 15, I discovered Chris Squire, and I went over the top – started using a pick instead of my fingers, and learned every note on every Yes album, all the way through Going For The One.”

While playing in Dokken in the early ’80s, Pilson’s primary bass was a Jackson heard on Tooth and Nail, then he gravitated to Fender Precisions by the recording of Under Lock and Key.

“I found it when I first joined Foreigner. I had my ’58 but didn’t want to take it on the road, and I’d used some reissue ’50s P-Basses. I found this one at a store in L.A.; it felt right and the neck was really solid. I’d tried some ’64 pickups in it that sounded amazing, but they suddenly lost signal, so I replaced them with the ’66 pickups.”

The bass also has a Badass bridge that Pilson installed, and a chrome strip on the forearm bevel was there when he bought the instrument; it’s actually a nameplate that said “Chuck Brown,” though the name has been worn away.

Foreigner has been known to do acoustic/“unplugged” material in concert, and Pilson uses two Breedlove basses for those segments – one fretted, one fretless. He described them as “…amazing and gorgeous. I love the way they feel and play. The company has a love of instruments, which I think is pretty awesome.”

The classic lineup of Dokken reunited in 2016 for a quick one-off tour of Japan.

“That went a lot better than I was expecting,” Pilson recounted. “We had a lot of fun and got along great. It was a very positive experience, and everybody bonded.”

A DVD/CD set from the Japan reunion tour is slated for release this year.

“We also wrote a new song,” he added. “It came out amazing, and we were really pleased. We also did some acoustic versions of some old Dokken tracks.”

Asked about any perceived contradictions in having played in a hard-rock/heavy metal band and the transition to an iconic “arena rock” aggregation, he said, “People will ask, ‘How different is it?’, and I say ‘It’s not as different as you think because Dokken was influenced by Foreigner.’ I was already a Foreigner fan.”

Regarding the evolution of Foreigner over four decades, Pilson said of the current lineup, “We may bring a little more energy or may be a little heavier than the original band, but the principle is the same – heaviness and melody with great hooks.”

Foreigner will be releasing an album in May titled 40 Hits From 40 Years, which will include some newly-record “unplugged” versions of its hits. Pilson predicted more acoustic concerts in Foreigner’s future, as well, and was looking forward to an upcoming performance with an orchestra in Switzerland.